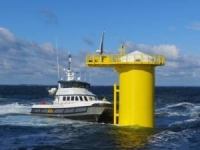 LONDON — As offshore wind development moves further out to sea, into deeper waters and harsher weather conditions, service and support vessels — boats used for installation, crew transfer and maintenance — have seen a sea change from smaller boats, often re-purposed from other sectors, to purpose-built craft of 20 metres and larger.

The most popular modern vessels now reach 24 metres and, with the UK’s Round 3 energy plan approaching (offshore wind is a major factor), 26- and 28-metre boats are being designed.

Why Are Bigger Boats Needed?

Wind farm owners are “starting to really push the limits in terms of the weather they want you to work in,” says Ian Baylis, managing director of Seacat Services. As projects move further offshore, support vessels will spend more time travelling and working outside windows of calm weather, and the larger the boat, the more capable it is in rough waters and high wave heights.

In addition, the comfort and safety of the wind technicians who may commute to work on a boat becomes more important. “It’s challenging in terms of the sheer time technicians can spend in transit each day,” says Baylis, “not to mention the working day they’ll have. At Greater Gabbard it’s an hour and a half ride in the morning, at least 10 hours in the field, going up and down towers — physical work. Then 1.5 hours transit home — all in challenging sea conditions. These guys are not seafarers; some technicians transfer from other places and may never have been on a boat.”

Support vessel firms have responded to these concerns by building in features such as windows for 360-degree vision (being able to see the horizon will lessen seasickness); soft-mounted superstructures to minimise noise and vibration; suspension seating; equipment storage lockers to keep main areas unobstructed, and gangways with motion compensation. Baylis, a former sailor, says his vessels’ interiors are painted light grey to make them feel larger, and all seats face forward, again to minimise seasickness. Ben Colman, sales and marketing manager at Alicat Workboats, says his firm has installed suspension-mounted wheel houses, which eliminate shocks and vibrations from sea motion. Crew transfer vessels have traditionally been day boats, Baylis says, but this is changing and there is now more accommodation on board — and all of this requires extra space. 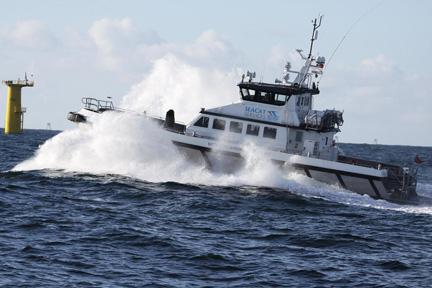 Then there are risk management firm DNV’s class rules, in operation since 2011, which certify that a vessel has been surveyed throughout the building and testing process and meets stringent international standards. Under this system vessels must incorporate redundancies to ensure the reliability of machinery such as engines, warning sensors and control systems, leading to a need for extra space to fit, say, four engines instead of two.

And boats are increasingly multipurpose. “A 28-metre vessel has a much higher capital purchase price so we have to make it as diverse and multi-role as possible,” says Colman, adding that “a 28-metre we’ve recently designed has dynamic positioning, which is more normally seen on construction vessels, tugs and jack-up barges for precise positioning.” These multipurpose boats feature integrated video/communications systems for survey work; multi-point anchoring systems for diving and salvage; cargo payloads up to 20 tonnes; a pressure washer for turbines fitted to the front of the boat; cranes and other lifting mechanisms and higher fuel storage capacities, allowing the boat to go further offshore and to transfer fuel to substations, turbines and other vessels.

All of this development, Baylis and Colman say, is increasingly customer-driven. Customers want speed, comfort, safety, cargo capacity, multipurpose functionality and reliability — all in an affordable package. “Development was led initially by the vessel owners. We started to bring these concepts to market in order to gain a competitive edge,” says Baylis. “But, more and more, larger customers are writing them into their tenders. For example, Siemens put in their tenders that passenger salon noise levels must be below 78 decibels. Now customers are starting to say vessels must have suspension seating and good all-round vision. Demands are becoming increasingly higher.”

“We work very closely with clients and prospective clients,” says Colman. “There are easy requests — the client wanting the vessel in their corporate colour scheme, for example — and requests for things as fundamental as the impact bow fender across the front that interfaces with turbine boat landings. We get a lot of feedback from clients, and we try to harness that back into our vessels as quickly as possible,” he says. 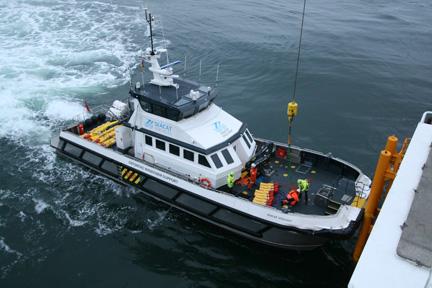 The biggest challenge for the support vessel sector, says Colman, is “future-proofing”: understanding how industry needs will evolve over the next five to ten years, and building now to address those needs. But the future is a moving target and redesigns happen every two years. “We never get more than a maximum of 10 boats out of a product line before it is significantly redeveloped,” he says.

“We need to understand where the industry’s going to be in five years’ time,” says Baylis. “We spend a lot of time researching in-house, designing now to start building in two to three years. But we also look further than that. We try and follow every proposed offshore wind farm through the planning stages to understand when it will come online. We need to understand the delays each particular project has. And, where a wind farm is located will affect the type of vessels it needs to operate.”

Among the technical challenges, reliability is the key issue. “These vessels work very hard — wind is probably the hardest-working industry for small vessels — they work 12 or even 24 hours at a time on long-term contracts so have very little time to be maintained and serviced,” explains Colman. A vessel’s machinery is the most likely area to fail, he says, as it needs the most servicing. Fuel systems and seawater and cooling systems are potential areas of concern.

Given big potential problems like engine failure, smaller vessels are increasingly unsuited for work further offshore. “It’s hard for a smaller vessel to keep working with one engine down, but it can get back home,” Coleman says. On a bigger boat, such as a 28-metre vessel with four engines, system redundancy can ensure backup and work continuance, while smaller boats can’t incorporate much redundancy as more machinery simply won’t fit.

Design is also challenging. There are performance tradeoffs, says Baylis: for example, if a vessel is capable of going very fast in high seas, it’s more difficult to manoeuvre once it gets to the turbine because more of the boat is underwater. And there are other tradeoffs that must be considered. “It’s challenging to balance the capital purchase price of a boat with the day rate that can be achieved from operator to client,” says Coleman.

Safety standards are another moving goalpost, with more stringent rules issued every five years or so. A vessel must meet the safety standards that were in effect when it was built, unless there is an underlying issue with the design. But, says Baylis, in relation to aspects such as crew numbers, the laws are changed fairly often in response to maritime accident reports. The Costa Concordia accident will likely result in new regulations, he says.

The support vessel market has seen signs of consolidation from the latter half of 2012 into this year, with smaller builders struggling to compete given today’s higher performance expectations. Obtaining financing is increasingly difficult and some smaller companies are being sold to larger ones. For a while, says Colman, “there have been more boats than there is work,” and many smaller boats are now being moved out of the industry. “In the last few months one of our key clients sold their business to a larger concern to make them stronger and enable them to grow in the industry’s direction,” he says.

“It’s very hard for any new or small customer to get into the industry because of the financial commitment they have to make,” Colman continues. But consolidation isn’t a welcome scenario for the big players, he adds: “The industry would like to see more operators tendering for their work so they can be more selective and competitive on their rates.”

Vessel operators require bank financing, which is “hard to get these days,” Colman says. One way the industry is addressing this is through increasing adoption of class standards, which offer lenders more security. If lenders don’t insist on class standards, he says, they often base their decision on where the boats are built.

Each nation’s waters and what happens in them is controlled by its “flag state” or maritime authority; operators “flag” a boat in its home country and conform to the standards set by that flag state. For a boat to operate in another country, it must also conform to a second set of standards. Classification ensures that vessel construction meets all national regulations so boats can move seamlessly between countries.

Baylis sees the support vessel sector mirroring the early days of the oil and gas industry. “There were lots of variations,” he says, “which got condensed into one very high standard — that’s how our industry will evolve. Those of us pushing the boundaries are making the rules at the moment, helping to write the rule book as it will remain for some time.” He predicts an evolution to “extremely high” quality and safety standards, with very rapid progression from 2014.

Colman agrees. The industry is relatively slow in defining its future standards and requirements, he says; it is “very much left to operators and builders to propose to the industry what they feel is required.”

But offshore wind support won’t all be about big boats. “Moving into Round 3, I believe we’ll see a mix of larger vessels and smaller ones that can be lifted onto ‘motherships’ and onto offshore stations or kept in harbours,” says Colman. “It will be a diverse fleet.”

Colman and Baylis agree that the larger boats will keep getting larger. “What was a big boat two years ago is a little boat now,” says Baylis. And as wind moves further offshore, one thing is certain: you’re going to need a bigger boat.