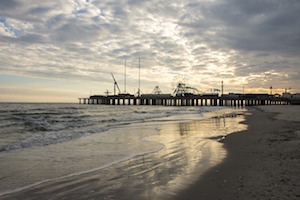 EDF Renewable Energy yesterday said that it is moving forward with a plan that will enable the company to bring online a 24-MW offshore wind farm in New Jersey waters by 2020.

The company is taking advantage of swift action taken by New Jersey’s new governor to advance the state’s offshore wind industry after it stalled for years under former Gov. Chris Christy.

EDF RE said that it entered into a preliminary agreement with Fishermen’s Energy to acquire their fully developed 24-MW project sited off the coast of Atlantic City.

“EDF RE is excited by the Governor’s ambitious plans to be a leader in the offshore wind space and we are eager to work with Fishermen’s Energy to provide an immediate opportunity for New Jersey to gain the benefit of local investment, jobs, infrastructure, and experience,” Doug Copeland, EDF RE’s regional project development manager, said in a statement. “The U.S. offshore wind industry is poised for tremendous growth and we believe an early stage project will help New Jersey develop the infrastructure to support this rapidly growing industry.”

A combination of factors, not the least of which were the lack of a power purchase agreement and a failing support structure from New Jersey’s government, caused Fishermen’s Energy to suspend operations for the project in 2016. EDF said its plan to move the project forward now is a direct response to Gov. Phil Murphy’s goal to promote the development of 3,500 MW of offshore wind by signing Executive Order No. 8 in January. The order directs the New Jersey Board of Public Utilities to fully implement the Offshore Wind Economic Development Act (OWEDA), originally signed by Christie in 2010.

Are you informed enough to diversify your business & be involved in this growing US market? Discover ways you can expand your knowledge on the growing wind and offshore oil & gas market at #OWES18. Register early and SAVE $200 on your registration! https://t.co/VxztQpvdxr pic.twitter.com/b0x5AT8cZ9