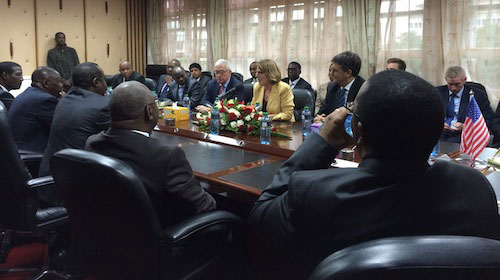 The 100-megawatt, grid-connected wind power facility located south of Nairobi will be, when complete, one of the first utility-scale wind projects to come online in Kenya, where over 75 percentREW_Welsp of the population still lack access to reliable electricity. Situated in an area with strong, consistent wind currents, the Kipeto project will provide cleaner and more reliable energy to Kenya’s national grid, helping to further bolster the country’s growing economy.

Elizabeth Littlefield, President and CEO of OPIC, signed a commitment letter of OPIC’s debt finance support alongside Jurie Swart, CEO of African Infrastructure Investment Managers. Littlefield was in Nairobi with President Obama as part of the U.S. delegation to the 2015 Global Entrepreneurship Summit.

“Kipeto is a transformative project for many reasons, principally for the clean and reliable energy it will supply to Kenyan citizens,” said Elizabeth Littlefield. “It will be one of Kenya’s first utility-scale wind projects and can contribute more than 20 percent of residential power consumption at current usage rates. Our commitment to Kipeto is also a significant step in OPIC’s pledge to President Obama’s Power Africa Initiative.  OPIC is proud to support the Kipeto project and its role in advancing Kenya’s economic prosperity.”