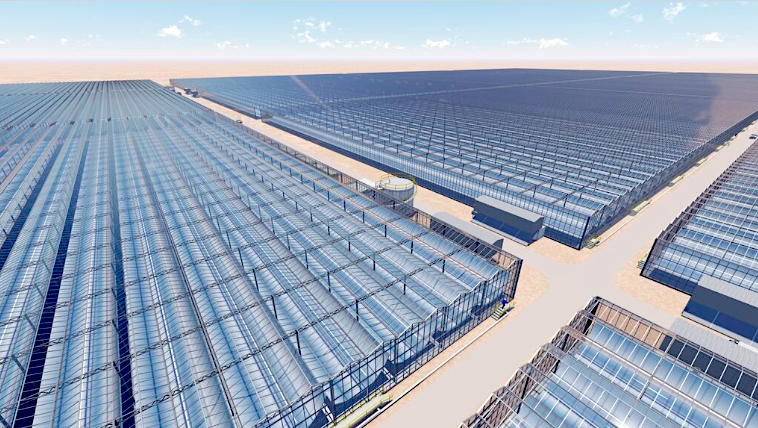 In the South Oman oilfields, a glass-encased Concentrated Solar Power (CSP) project the size of an average nuclear plant has broken a new record for solar.

After proving its technology in a 7 MW demo, which beat its promised energy output every month for a couple of years; Glasspoint has landed a deal to build Miraah, a gigantic 1 GW solar Enhanced Oil Recovery (EOR) project for Petroleum Development Oman (PDO) at Amal West oil field.

At an astonishing 1,021 megawatts, Miraah is almost three times the capacity of Ivanpah, which at 377 MW is currently the world’s largest CSP project delivering electricity.

Yet not only will Miraah (mirror in Arabic) produce steam at gigantic scale, but it does so at much lower cost than CSP and about half the cost of gas. The 1 GW project will cost a mere $600 million.

Each 50,000 m² glasshouse is a standalone 25 MW solar steam generator, able to be deployed alone as a single “block” or in multiples. The Miraah project makes 36 copies of Glasspoint’s standard block in which sunlight reflected off trough mirrors on to pipes containing recirculated oilfield “produced water” makes steam.

“I think this is going to revolutionize many aspects of the energy market,” said

Justin Dargin, MENA energy expert at the University of Oxford. “The Miraah project has shown the world that this technology is viable and it has economies of scale and it can be deployed at quite an economically competitive cost.”

According to John O’Donnell, Glasspoint’s VP of Business Development; PDO’s decision came not from concerns about carbon emissions, but from realizing that solar — rather than gas — is the most economical.

“Today with the price of oil way down, many, many oil companies have significantly cut the capital budget in their spending,” he said.  “The fact that Oman’s largest oil producer is making a major capital move into solar shows you that they realize that solar will maximise their remaining reserves because they can extract more oil, saving gas for other applications.”

“I’ve looked at giant power station projects that only needed 4 of our blocks and little oilfield projects that needed two hundred,” said O’Donnell.

By selling “a product – not a project” to a cash-paying customer – the oil industry, Glasspoint has been able to grow literally in leaps and bounds from their initial one third of a MW EOR project in California, to their 7 MW Oman pilot, to now, this groundbreaking 1,021 MW Miraah EOR project. No renewable startup selling power to utilities could fund such huge growth in just three steps.

Yet for all its size, this landmark project is relatively tiny relative to potential.

“You might look at this as a landmark CSP project, as it is the world’s biggest and yet it is just a small fraction of the steam at just one oilfield,” he said.

How It Was Done at Such Low Cost

Glasspoint uses standardized oilfield components that integrate with existing operations; innovating only where they have to, in solar collection. But enclosing its CSP in standardized agricultural greenhouses was Glasspoint’s key frugal insight, because getting the solar collectors out of the wind meant they could be super lightweight and cut construction cost.

“This is the first trough in the world that lives in a zero wind indoor environment, so it weighs 10 percent as much as other troughs,” O’Donnell explained.

But as it turned out, protection from sand and dust turned out to be an even more significant advantage.

Commercial greenhouses have long been engineered to withstand conditions ranging from 150 mile-an-hour winds on Bermuda to 50 lbs/sq ft snow loads in Antarctica – and to be washed by standard robotic cleaners.

“Operating in Oman, we found output falls by 3 percent if we don’t wash overnight, and after dust storms; output could drop by 20 or 30 percent,” he said.

“We talk to people driving to that oil field every day who need to put a new windshield on four times a year because there is a six-foot-high zone of blowing sand near the oilfield.”

Even windows on buildings there turn a milky white in under a decade. But the roof of each twenty three foot glasshouse is above the abrasion zone.

No Turbine or Boiler

Glasspoint now uses only pipes and lightweight mirrors to create steam: each glasshouse is a steam generator – with no power block.

This simplicity evolved as a learning process. When I first spoke to MacGregor, he still planned to use oilfield machinery that could run on what he described as the “horrible” oilfield water used in gas EOR.

Unlike gas or coal which will always need a turbine and a boiler — and fuel — to make steam of any temperature, this solar technology makes the exact temperature steam needed for EOR cheaper than gas partly because it can do that without the costly turbines and boilers of traditional steam generation.

“We are at a moment where the shape of the curve changes,” said O’Donnell. “People are going to naturally drive towards what is cheapest.”