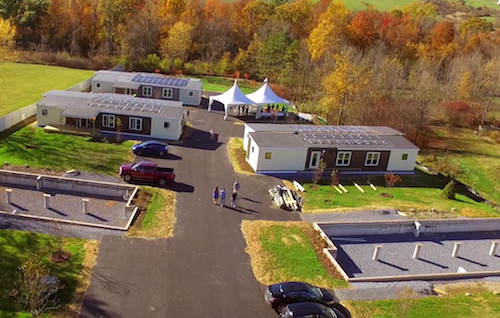 But the 14 homes at the McKnight Lane Affordable Housing Development are, in their own way, marvels of modern design and, more importantly, will deliver huge energy savings for the low-income families that will rent them. The solar-plus-storage systems on each of the homes will also help the local utility, Green Mountain Power (GMP), shave its peak demand and capacity costs, with savings passed on to all the utility’s customers.

GMP is a member of the Smart Electric Power Alliance (SEPA). Providing simultaneous customer-grid solutions is what the utility is all about, said Josh Castonguay, Chief Innovation Executive.

“We’re sort of an energy transformation company,” he said. “Our focus is around energy transformation — how the customer experiences it — much more locally produced and consumed, resilient and cleaner from a carbon point of view. You can do that with one-offs, but when you can start to do it at a community scale, that’s when you start to see a difference.”

Which is all to say, some of the most significant developments in the energy system transition now underway in the U.S. are happening off the mainstream media radar. The kind of elegant aesthetics and technology that are Musk’s trademarks will undoubtedly help drive system change — for those that can afford them. But McKnight Lane represents a different, and equally important approach — the pragmatic deployment of well-designed clean energy technology that provides benefits to customers and the grid in low-income communities where the economic impacts are immediately apparent.

Incorporating super energy-efficient design into low-income housing is not a new idea. A number of studies have shown that low-income households pay a greater percentage of their income on energy than middle or high-income families. High-efficiency and zero-net low-income communities — with houses and apartments that produce as much energy as they consume — have been built or are being planned across the country.

The result of a community effort to rehabilitate a dilapidated, abandoned mobile home park, McKnight Lane may be the first to incorporate solar plus storage in a system that allows energy resources from the houses in the development to be aggregated for grid support services.

The project is named for Terry McKnight, former executive director of the Addison County Community Trust (ACCT), an affordable housing nonprofit in southern Vermont. McKnight started work on the project before his sudden death from a heart attack in 2014. The trust then partnered with another affordable housing nonprofit, Cathedral Square, to continue to develop McKnight’s original vision.

Funding for the project was obtained from a small army of public and private sources. German storage manufacturer sonnen Inc., also a SEPA member, provided the storage systems for each home at a discount. The Clean Energy Group of Montpelier, Vermont will monitor and document the project to see if the storage systems provide the backup services and achieve the cost savings anticipated.

Todd Olinsky-Paul, Project Director at the Clean Energy Group, said the long-term goal is to help other utilities and low-income communities replicate the McKnight Lane model and make future projects easier to finance.

“Our focus is how to get this technology accessible to those who are not wealthy corporations or individuals,” he said. “How do you bend the arc of technology to make sure (the people) have access who really need it the most. Every project can’t rely on subsidies and foundations. You need to figure out the economics.”

Since the official ribbon cutting at McKnight Lane on Oct. 19, residents have moved into five of the units at the project, and Elise Shanbacker, Executive Director of the ACCT, expects the rest to fill up “as soon as we get certificates of occupancy.” Residents at the park include all ages from first-time renters to seniors, she said.

The houses themselves were built by VERMOD, a unique business founded in the aftermath of Hurricane Irene, which caused widespread flooding and devastation in Vermont in 2011. The hurricane left low-income communities especially hard-hit.

Steve Davis, the company’s founder, said his goal was to help replace housing in these communities with well-built, but affordable zero-net modular homes — which at this point is the only kind VERMOD builds.

Marcie Pleasants is not a resident at McKnight Lane, but she has lived in a VERMOD zero-net home for two years — and became such an enthusiastic advocate, Davis hired her. She is an expert on how the homes at McKnight Lane are constructed, from their 11.5-inch-thick walls, sealed tight and filled with blown-in fiber glass insulation, to the triple-glazed windows, top-tier Energy Star appliances and 6-kilowatt solar systems.

Pleasants said she has not paid an energy bill since moving in, and under the net-metering rates in effect at that time, she currently has utility credits of about $1,000.

It’s All About Peak Shaving

What’s new at McKnight Lane are the 6-kWh sonnenBatterie storage systems which will provide residents with backup and emergency power in case of an outage. Olaf Lohr, sonnen’s Business Development Director, said the system will automatically island itself — that is disconnect from the grid — in the event of an outage, and direct power to major home appliances.

Green Mountain Power will also be able to aggregate and draw on power from the batteries to help it cut peak demand and the resulting capacity charges it has to pay to the New England Independent System Operator, which operates the transmission grid in the six-state region.

Capacity charges are fees paid by utilities to grid operators based on the maximum amount of power — the peak — they draw from the grid in any one year. Transmission grid operators must have enough capacity to cover the peak demands on their systems.

In an effort to reduce its peak demand, Green Mountain Power earlier this year started offering Tesla’s Powerwall storage units to customers who had already installed solar. Aggregating available solar and storage capacity from those units allowed the utility to save close to $200,000 during its summer peak in August, Castonguay said.

For GMP, McKnight Lane represented an opportunity to offer similar technology to low-income customers who would otherwise not be able to afford it, while expanding the utility’s ability to continuing shaving its peak demand, he said.

The full potential of this technology — for cost savings and grid transformation — is only now being explored. Lohr said the storage system used at McKnight Lane is based on the sonnenCommunity system the company has rolled out in Germany, which allows people to buy and sell power from their solar plus storage systems, effectively creating a retail electricity cooperative.

The software being used in the U.S. is different, he said, to allow customization for individual utilities’ or region’s distribution platforms. The smaller size of the McKnight Lane homes also meant sonnen had to resize the storage units a bit, he said.

Olinsky-Paul believes capacity fees charged by grid operators will continue to rise across the country — and possibly triple in New England in the next two years. Such cost spikes could make the peak-shaving capabilities of aggregated solar-plus-storage an increasingly attractive and economical option for utilities and their customers.

Even Musk has realized the main value of solar plus storage will more likely be on the grid than behind the residential electric meter. And the proving grounds for the technology could be projects like McKnight Lane.

This article was originally published by the Smart Electric Power Alliance and was republished with permission.