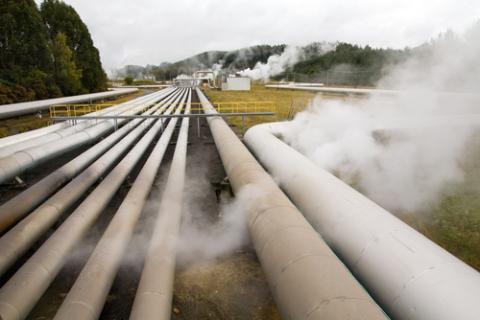 The basin where Kalahari is drilling its first exploration well may have enough resources for as much as 1,000 megawatts, or about half of the southern African nation’s current generation capacity, Vivian-Neal, the former CEO of Kiwara Plc, which First Quantum Minerals Ltd. paid $260 million for in 2009, said by phone on Aug. 23.

“We are looking at the sedimentary basin, which in the U.S. context might have the capacity of 100 to 1,000 megawatts,” he said. The Geothermal Energy Association says the U.S. produces 3,187 megawatts of capacity from this source. Kalahari drilled its first well in Zambia’s Southern province Aug. 12 and “interpretation should be complete by end of December,” according to Vivian-Neal.

The country has capacity to produce about 2,000 megawatts of power, almost all generated by hydro plants such as Kariba North, which lies on a dam on the border with Zimbabwe.

Kalahari, based in Lusaka, the capital, might proceed with deeper drilling to prove a geothermal resource in May, depending on the outcomes of preliminary drilling that’s under way, Vivian-Neal said.

If the results are positive, the company will probably build a power plant with a megawatt capacity as much as “the high teens,” he said. One megawatt is enough to power about 500 to 1,000 U.S. homes.

“You start with something really small and show people that it works and then you add incrementally,” he said.

Kalahari’s shareholders have funded works so far, and the company will look to raise money once it has the results of the preliminary drilling, said Vivian-Neal. The company will also consider an initial public offering in the future, he said.

“We’re in a strong position to raise funding given the interest in the east African geothermal industry,” said Vivian- Neal. “A company like this conceptually might be of interest to other industry operators.”

Kenya has an estimated untapped geothermal resource of as much as 10,000 megawatts, while Geothermal Power Tanzania Ltd. plans to spend as much as $350 million to produce electricity from steam wells in that country.