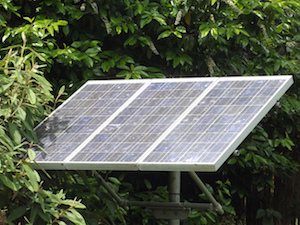 There’s been much written about solar PV storage in recent months. Tesla and Elon Musk are working hard to develop it and other renewable companies, including British-born ones, are beginning to follow suit. The equation is fairly simple — if we can store energy for when the sun isn’t shining, then solar becomes a whole lot more viable.

Actually, developing storage devices for electricity has the potential for a much wider impact than just for renewables like solar. It could literally transform the way we manage energy across the world.

Oxspring is a leafy village in the heart of South Yorkshire and it’s now being used for an experiment with homegrown battery technology. Towards the end of January, a row of bungalows with their solar panels will be given storage batteries that have been developed by British energy storage company Moixa.

The company has invested £250,000 (US$313,000) into the project to find out how their batteries perform in unison, in part to counter the increasing problem of pushing power from solar panels to the grid. The introduction of batteries may be used in the future not just to provide independent storage for homeowners but to prevent ‘bottlenecks’ on the power network from independent suppliers.

This development and others in the UK follows on from the rise in sales of Tesla’s Powerwall over the last 12 months and the fact that people are very interested in installing storage technology. There are now over 800,000 solar arrays installed on homes across the UK and the number is increasing despite the cut in Feed in Tariffs at the beginning of last year.

Storage presents a real opportunity for home owners and businesses to get more value out of their solar panels. What is less known is the challenge that increasing solarization is putting on the National Grid. Batteries could also give owners a chance to produce electricity at a time when it is at its cheapest and store it for when it is most expensive.

Power storage doesn’t just have a potential for solar and other renewables that have times when they are not producing electricity. Powervault recently started a trial by installing batteries in 60 homes, using them as a collective to store energy from solar which can then be released at peak periods.

Meanwhile, battery technology continues to develop, and it’s only going to get better. Tesla is currently increasing the capacity of its existing batteries, which means they will be capable of storing more electricity.

Developments in battery technology could have the capacity to totally alter the way we manage our power, and British storage companies are now starting to compete and improve their devices. In the future, every home could have a power storage system whether they have a renewable technology or not. According to Powervault: “National Grid spends about £1bn a year balancing demand and supply of energy. Currently they pay that money largely to big power stations but in the future we’ll move to a scenario where it also goes to a collective of batteries.”