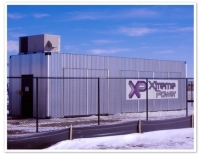 Xtreme Power, which has shown considerable success in selling its energy storage systems and services to utilities, is now eyeing the electric car market and developing not just a battery system for it but the entire drivetrain.

The Texas company plans to announce the new drivetrain later this year, said its founder and chairman, Carlos Coe, during a video interview at PV America West in San Jose last month (see below). The aim for the electric car market brings the company back to its roots: Xtreme Power’s technology came from a joint venture between Ford Aerospace and Tracor in the 1990s for an electric car market that later fizzled.

“The goal is not just to throw another battery out there but to put out a better drivetrain,” Coe said.

Xtreme Power, backed by venture capital, is targeting larger vehicles such as SUV and trucks, fuel guzzlers where greater power savings can be achieved more quickly with more efficient technology. The company plans to sell its drivetrain for after-market conversion of vehicles initially while it works on convincing carmakers to use its technology in their assembly lines, Coe said.

The company actually has posted some information about a drivetrain on its website, though it’s not easily found. There is a private video that requires a password to access, but below it is a PDF file that lists some specs.

Founded in 2004, Xtreme Power has been targeting the emerging market of grid energy storage, and it has lined up quite a few energy storage projects with utilities who want to figure out ways to integrate renewable energy into the grid. With the growth in wind and solar energy, utilities are worried about the impact of these energy sources – which don’t produce a steady stream of power in all hours – on the stability of the grid, which must maintain a balance of supply and demand to work well. The output of a solar power project can be more variable than wind, Coe noted.

Customers that have turned to Xreme Power include Duke Energy and a 36 MW system next to a wind farm that will come online later this year, Xcel Energy and a 1MW project for a solar technology testing center, several wind and solar farm developers with projects in Hawaii and a project announced just yesterday: a 3MW project with Kodiak Electric Association in Alaska to store power from a wind farm.

Xtreme has been deploying its energy storage systems in the field for several years now, and that has given it operational data to show its performance and to some extent the reliability of its technology. It recently opened an office in Beijing to target the grid storage market there, Coe said.

China has been a magnet for battery and other energy storage technology developers because of the government and their state-owned utilities are keen on using energy storage to complement the country’s own growing amount of renewable energy.  Lithium-ion battery makers such as A123 Systems and Boston-Power all are targeting the Chinese. Boston-Power has gone as far as moving the bulk of its operation, including manufacturing, to China.

Xtreme’s technology is a bit of a mystery. It’s never disclosed publicly the core materials used for the battery cells, which the company’s website describes as using alloys such as lead, copper and tellurium. It’s a “dry cell” because the cells are electrically isolated from one another inside a battery pack and contains an electrolyte that isn’t a liquid, gel or paste, Coe said. Liquid electrolytes can be conductive and flammable as they react with other components of the cell, a problem that has inspired a number of startups such as Seeo to develop solid-state electrolytes.

Xtreme Power also has designed a current collector, which is used to ferry electricity out of the cell, that is made with ballistic-grade fiber and topped with a “special alloy,” Coe said.

“If you stabilize the electrolyte you get a very predictable, stable battery response,” Coe said. “All cells are electrically isolated from each other. It’s a very different than any other types of batteries that I know of.”

While the battery technology has invited speculations, Coe said the bulk of the company’s technical expertise is actually found in the software and hardware that control the performance of the overall battery system and its integration into the control systems of a utility or power project developer.

The company makes money in several ways. It sells the equipment to customers who can operate the systems themselves or hire Xtreme to do it. It also leases the equipment or sells service agreements that has Xtreme owning and operating the systems for customers.

A 1.5 MW system (not just the batteries) retails for $1.6 million, or roughly $1,000 per kilowatt, Coe said. That price point makes Xtreme’s equipment competitive with a peaking power plant that is turned on to supply power during peak demand, Coe said. This system can produce 1 MWh of energy, and the retail price for replacing the battery pack in the system is $360,000, or $360 per Kilowatt-hour, Coe said.

Later this year, Xtreme plans to launch smaller systems for “community storage” or even energy storage for homes and businesses. Home and business owners may want to bank the solar electricity from their rooftop panels, and utilities are looking at using energy storage to help them regulate the grid’s health and provide backup power during blackouts. Xtreme will be launching systems from as small as 5 KW to hundreds of kilowatts each, Coe said. Utilities are looking for systems in the 25 KW range.