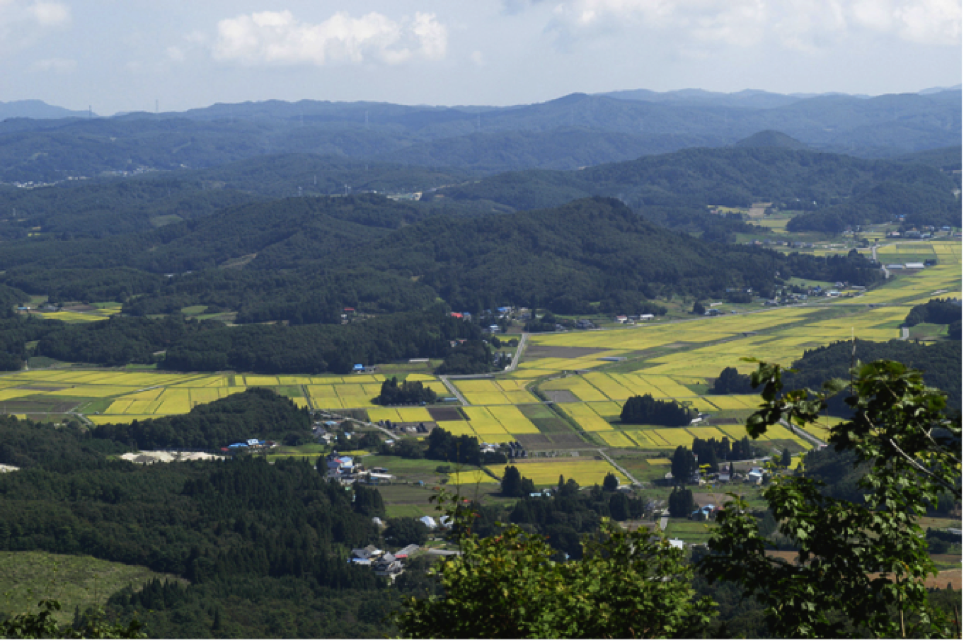 The exclusive use of energy from renewable resources in at least one sector has now become a feasible goal for 8 countries. Diane Moss, Founding Director of Renewables 100 Policy Institute, discussed this remarkable development at one of the conference sessions at Intersolar North America 2015.

Denmark, Scotland, and Aruba are among the nations with 100 percent renewable energy targets.  Besides the 8 nations, the Institute has so far mapped 55 cities, 60 regions and 9 utilities across the world that have officially established 100 percent RE goals, and Moss points out that there may be more and that those numbers are steadily increasing. 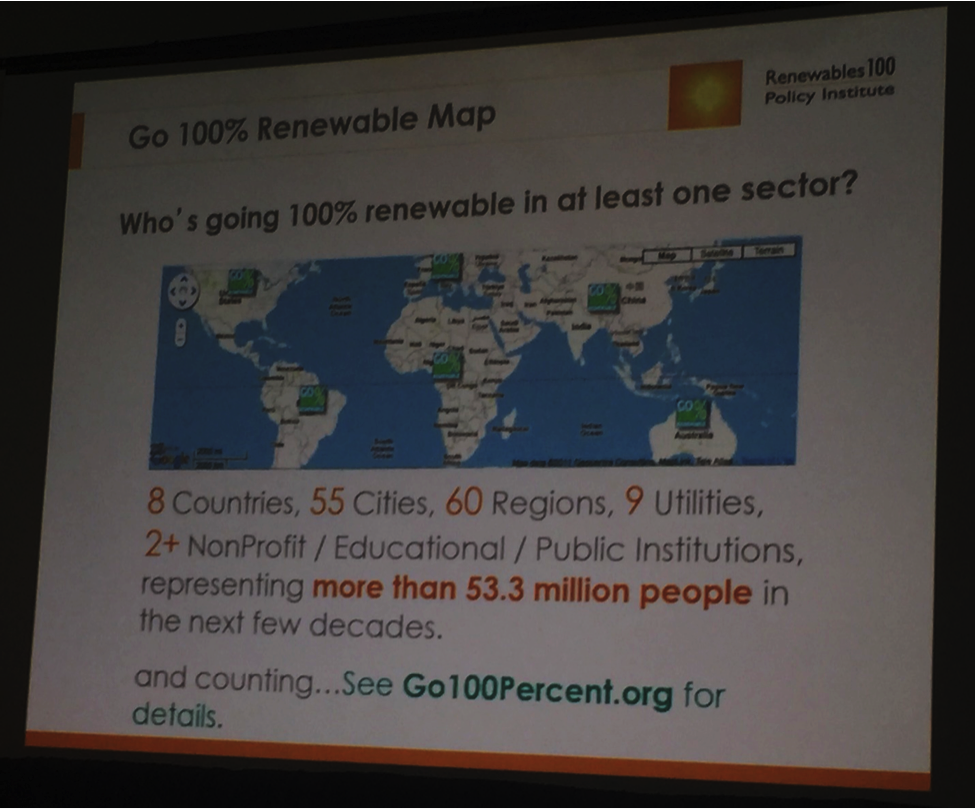 RE100 percent Around the World, Credit: Renewables 100 Policy Institute

Recent advancements in renewable technologies and rapid cost reductions have accelerated deployment of renewable energy, such as wind and solar photovoltaics (PV).  Renewables have started becoming a mainstream energy source in many parts of the world.

According to the Global Status Report published by REN21, a Paris-based nonprofit group, the growth of renewable energy outpaced that of fossil fuels in the electricity sector in 2014, with a record 135 gigawatts (GW) of capacity added from wind, solar, hydropower, and other natural sources.

Renewable energy developments have been driven largely by government policies, which include the RE targets of cities, states, regions, and countries. Some governments or communities are driven to deploy more renewables to reduce dependency on imported fossil fuels (energy security), tackle climate change (environment), and/or stimulate local jobs (economy).

In recent years, many jurisdictions, in both developed and developing countries, mainland and island regions, and in urban and rural communities around the world, made their existing renewable targets more ambitious, and some have even raised their targets to 100 percent.

The Fukushima prefecture in Japan pledged to transition to 100 percent RE by 2040 after the devastating Fukushima Daiichi nuclear power plant accident in 2011.The prefecture has made a strong commitment to become energy self-reliant by producing safe, clean energy locally for local consumption.

Energy use targets set by Hawaii, Fukushima, and many other entities are to meet 100 percent of their electric power demands with renewables.

Electricity, however, represents only part of the primary energy needs. According to Moss, the full definition of 100 percent renewable energy would have to cover all energy demands — electricity power, heating/cooling, and transportation — with sustainable renewable resources, including wind, solar, geothermal, wave, tidal, and sustainable hydro and bioenergy (primarily from waste). Moreover, all sectors of society should be covered, including residential, commercial, institutional, industrial, and agricultural sectors.

“Starting with a 100 percent renewable energy target — not just for electricity but across sectors — and planning on a regional, system-wide basis could help avoid some inefficiencies,” Moss continued. 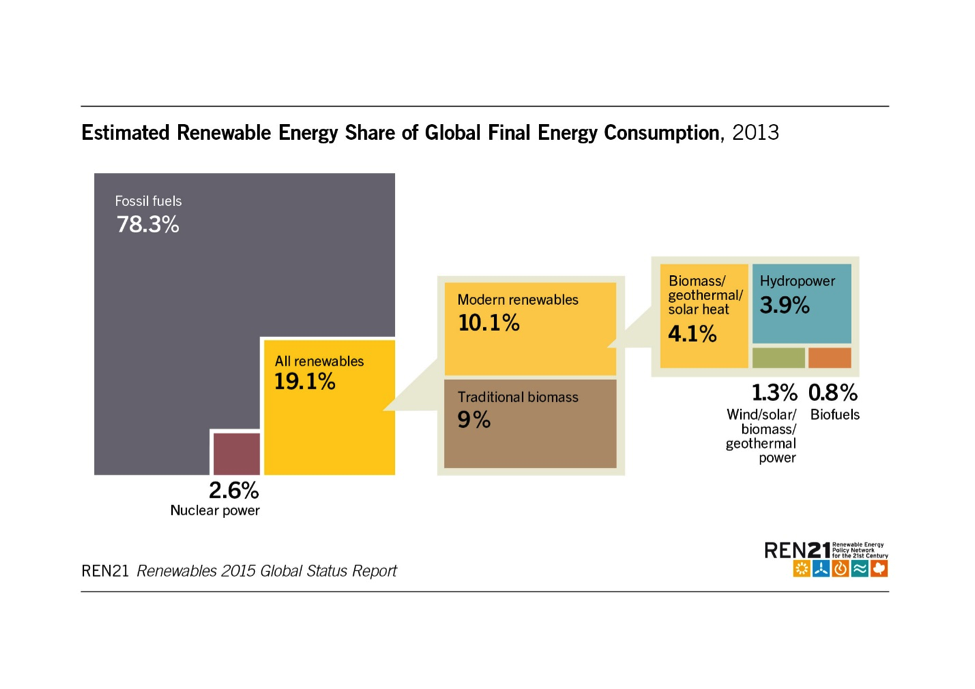 Some regions are already striving to go beyond electricity and cover other energy sectors with RE also.

In 2013, the City of Sydney, the most populated city in Australia, developed a plan to transition to 100 percent renewable energy for electricity and heating/cooling by 2030.  According to the plan, about 30 percent of the total carbon and nuclear free mix would come from wind and solar, and 70 percent from waste to gas from sources such as garbage, sewage plants, landfill sites, livestock, agriculture, and forestry.

Denmark, the first European country with such a far-reaching goal, wants to be off fossil fuels completely by 2050. As part of the country’s energy and climate strategy, its target is to meet 100 percent of its electricity and heating needs with renewable energy by 2035.  Furthermore, the country aims to phase out fossil fuel consumption in the transportation sector with electric vehicles (EVs) by 2050. 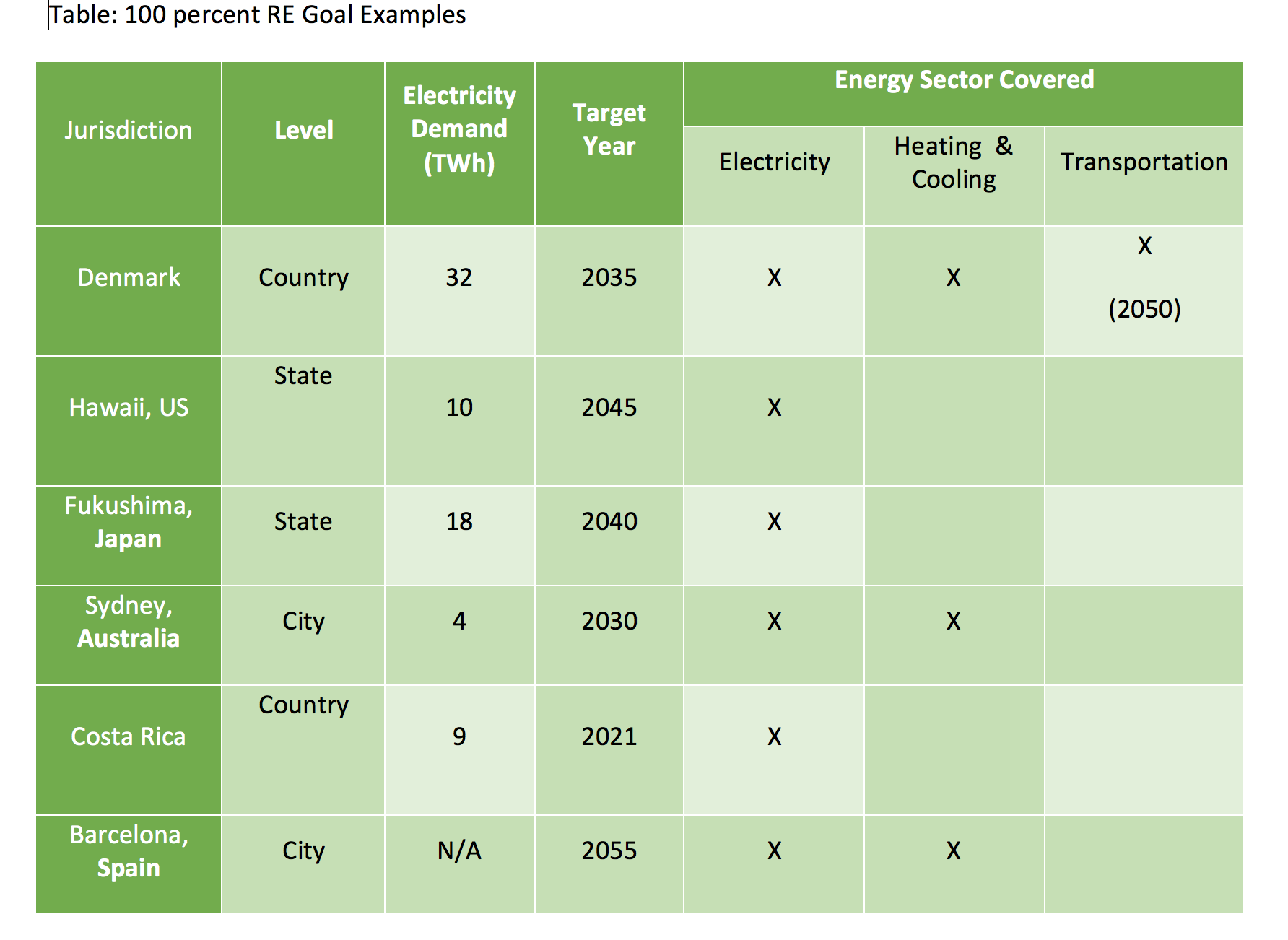 Various regions have been implementing a variety of technologies, applications, and ordinances to achieve 100 percent RE targets. Entities can deploy utility-scale renewable projects, small to medium, distributed generations or combination of both, depending on availability of land space and natural resources.

For example, the City of Lancaster, California, has embraced a combination of utility-scale and distributed generation to reach its goal of becoming the world’s first net zero energy city by 2020. To achieve the goal, the city has hosted a 5-MW Sierra SunTower solar thermal plant, created an affordable solar financing program with SolarCity, and established the first mandate in the U.S. to require all newly constructed single-family homes to include at least 1.0 kW solar system starting January 1, 2014.

To provide more renewables at affordable rates, the city launched a community choice aggregation (CCA) program called “Lancaster Choice Energy.” Under the program, it is authorized to procure power on behalf of all of the electrical accounts within the city.  “All energy (under the program) is currently procured from Direct Energy, with a current mix of biomass and wind.   Our goal is to procure as much locally generated energy as possible. In the very near future, we will supplement current energy supply agreements and support future renewable energy requirements with locally developed renewable energy projects,” stated Patti Garibay, Energy Manager of the Lancaster Choice Energy Program.

CCA’s, which are legally possible in 6 states in the U.S., have also been established in Sonoma and Marin Counties to forward ambitious renewable energy and greenhouse gas reduction targets,  and are being seriously explored in several other cities in California for this purpose, including San Diego and San Francisco, which also have 100 percent RE goal at the city level.

So, is it possible that the vision of a100 percent renewable energy future will become a reality? What is the biggest challenge or roadblock toward 100 percent RE?

“Numerous experts agree that the biggest challenge is not technical or financial, but gathering political will. This requires leadership at every level of government and business governance, as well as building momentum at the grassroots level. While we still have far to go, we’ve come a long way in recent years with hundreds of cities and regions now formally committed to 100 percent renewable energy targets in at least one sector, along with 8 countries, dozens of major corporations and thousands of businesses and several non-profit and institutional campaigns for 100 percent renewable energy. We need to massively build on that, gleaning best practices along the way to avoid repeating mistakes and reinventing the wheel,” said Moss.