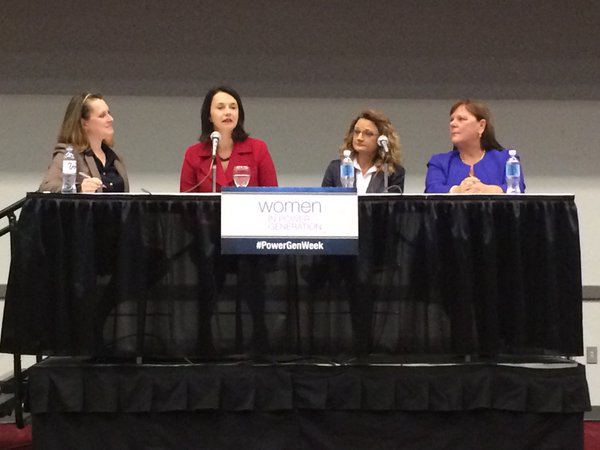 In 1984, when this year’s POWER-GEN 2015 Woman of the Year Kim Greene started engineering school, about 16 percent of her class was made up of women. Today, more than 30 years later, that number has jumped to just 18 percent.

Greene, the Chief Operating Office of Southern Company was one of three finalists for the 2015 Woman of the Year award during Power Generation Week and on Tuesday December 8, she took part in a panel discussion with her co-finalists: Terry Jester, CEO and Chairman of Silicor Materials and Roxann Laird, Director of the National Carbon Capture Center, during the Women in Power luncheon.

The fact that women only make up 18 percent of engineering students is an alarming statistic and was the topic of discussion for much of the panel. To combat it, Greene believes that everyone should be encouraging young women to study engineering. “Fathers, mothers, uncles, aunts, school teachers,” she said, explaining that it should be important to all of us to encourage girls to pursue education in technical fields that will (hopefully) ultimately lead to careers in the energy industry. Laird explained that she does simple things in her household, such as conducting science experiments at birthday parties for her daughter.

Also important is persistence, said Greene. Girls may need a bit of extra encouragement when they do poorly on a test or fail a class. If a mentor can offer words of encouragement like “keep your chin up” and “you can do this,” that may be all that is needed to keep a girl motivated who may otherwise have become discouraged.

As far as rising through the ranks of an organization, Jester believes it isn’t about being the smartest person in the room or always making the right decisions. Women just need to believe that they are capable of being charge. If you make a mistake, own it and move on, said Greene. It’s ok to admit you are wrong, don’t dig in your heels.

Panelists were also asked for tips on how to re-enter the workplace after a hiatus or after switching careers and all agreed on one thing: “don’t apologize for the gap.” Jester believes that someone who has re-dedicated herself to the workplace makes for an excellent employee.

At the end of the day “engineers solve problems,” said Laird adding, “it’s a fun industry.” Jester said that there are misperceptions in the industry that engineers are stuck in a cube or an office doing very boring jobs but it is not like that. Those of us in the industry know its fun.

Robynn Andracsek, an engineer with Burns & McDonnell and member of the Women in Power committee led the panel discussion during the luncheon.

The purpose of the Women in Power committee is to provide role models to inspire young women to pursue careers in energy. Anyone in the energy industry can nominate a woman for the Woman of the year award. Nominations are open from April to August each year.