The world’s most sun-powered nation is about to encounter an unusual complication: the moon. When a solar eclipse sweeps across Europe on the morning of March 20th, the moon’s passage in front of the sun will cast a sudden and giant shadow across Germany — a country whose reliance on solar energy is, by international standards, astronomical.

Although Germany is no bigger than the state of Montana, it boasts more than a quarter of all the solar electric capacity installed on earth. Its 1.4 million solar energy systems produce nearly 7 percent of the nation’s electricity. (In the U.S., solar provides about 0.5 percent.) And during the sunniest hours of the year, photovoltaic systems have satisfied up to half of Germany’s power demand. 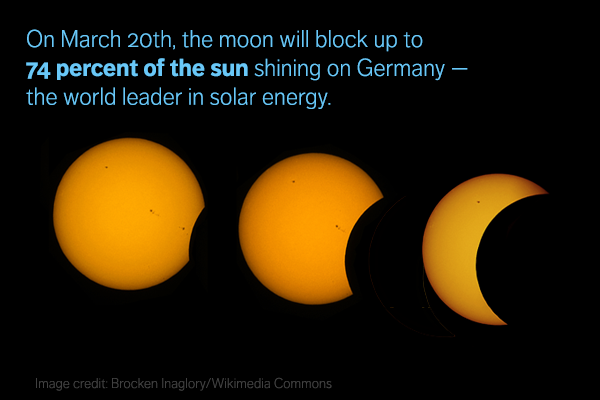 That raises an interesting question: when the moon blocks up to three-fourths of the sun shining on Germany later this month, how will electric utilities and the power grid respond?

To shed some light on the problem, we cracked open Opower’s energy data storehouse — the world’slargest, spanning more than 55 million households worldwide. Our findings highlight the fascinating challenges of a solar-powered energy future, and how new technology and innovative utility strategies will be essential to the operation of next-generation power grids.

Energy Data from a Recent Solar Eclipse in America

In October 2014, we caught a glimpse of how an eclipse can affect a region that’s teeming with solar panels: the Western United States.

The Western U.S. comprises several of the top solar states in America, and its sun-fueled energy portfolio continues to expand briskly — across large-scale solar arrays as well as customer rooftops.

So when a partial eclipse obstructed 30 to 50 percent of the sun on the afternoon of October 23rd, the western power grid felt it. Utility-generated solar electricity production plunged between 1:45 and 4:30pm, before returning to a typical late-afternoon pattern. 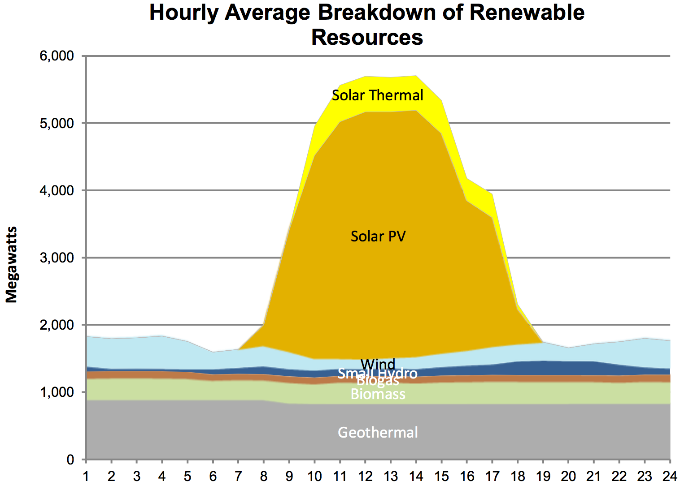 During an eclipse over the western US on October 23rd, 2014, utility-generated solar power production plunged (1:45-4:30pm), before returning to a typical late-afternoon pattern (Source: CA ISO)

Rooftop solar systems responded similarly. Electric usage data from a sample of 5,000 solar homes in Opower’s database shows that their shipment of excess power to the grid — indicated by negative electricity usage in the chart below — rapidly contracted during the eclipse. Solar customers exported 41 percent less electricity than usual between 1:45 and 4:30pm. 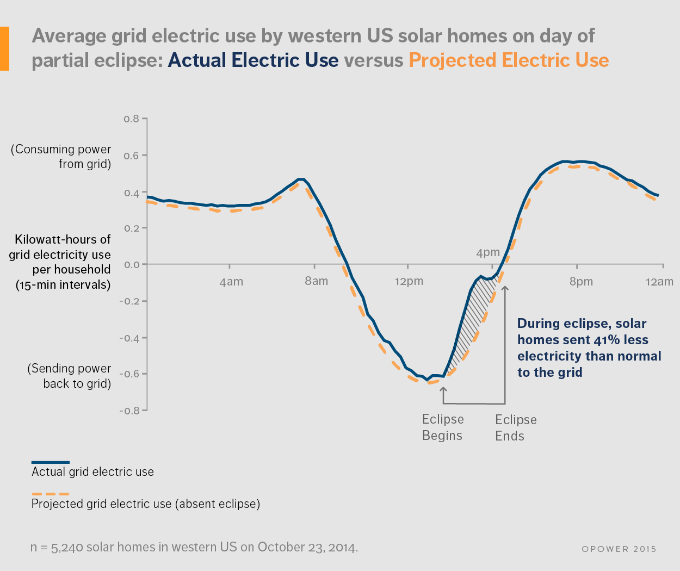 Looking at the same data from a different angle, you clearly see the steep drop-off in electricity supply: solar homes’ export of power to the grid declined markedly faster than usual. 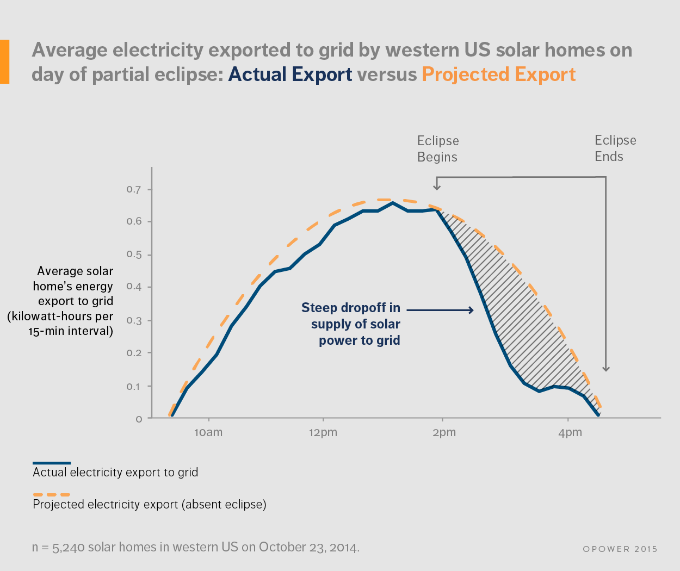 How did the sudden drop-off in solar production affect the region’s power grid? In short, it required utilities and grid operators to fill in the gap.

The electric system relies on exact second-by-second balancing of demand and supply. To prevent grid instability and blackouts, sudden decreases in solar power (or any kind of power source) must be compensated by changes elsewhere in the system, like turning on other power plants, reducing electric demand, or discharging energy stored in batteries.

That’s precisely what happened in the western US. At the peak of the October 23rd eclipse, which took more than a 1,000-megawatt bite out of solar power supply, the region’s primary grid operator responded by dispatching an unusually large increase in thermal (likely gas-fired) electricity generation.

But what would happen if we were to raise the stakes, beyond our western US example? What if wetripled the amount of solar panels installed and doubled the severity of the eclipse?

For an answer, we look to Germany.

What to Expect in Germany on March 20th

Between 9:30am and noon on March 20th, Germany’s 1.4 million solar power systems are in for a wild ride.

In the span of 75 minutes, the moon will go from occluding 1 percent of the sun’s glow to 73 percent. Solar production will fall, and fall fast — up to 2.7 times faster than it normally ever does, according to an analysis by the University of Applied Sciences in Berlin. The effect is similar to turning off a medium-sized power plant in Germany every minute — for a full hour.

The reverse is also true. As the moon recedes from blocking 73 percent of the sun to blocking none of it, solar power output could skyrocket by as much as 18 gigawatts in just over an hour — up to 3.5 times faster than usual. (Note that in the Western US case study, this kind of rebound in solar production was largely immaterial, since the eclipse ended near sunset.) 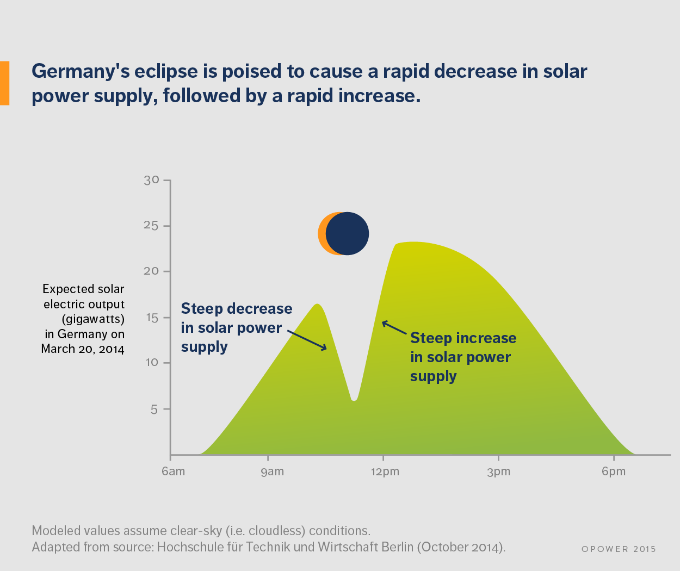 That said, there’s also a chance that the eclipse’s slingshot effect will be less severe than the chart above suggests. The ultimate outcome depends on cloud cover. If clouds are already blocking the morning sun, for instance, the eclipse will cause solar power production to dip from an already low levelto a somewhat lower level than that, and then inch back up again.

While Germany’s eclipse is perfectly predictable, the weather on March 20th is not. That means utilities and grid operators have to prepare for the most extreme impact and the most dramatic ups and downs in solar power production.

How will they do it?

As in the Western U.S., managing the impact of the German eclipse will hinge on real-time flexibility in power grid operations. Fortunately, that’s something Germany is good at, as evidenced by its impressive reliability in operating a grid that gets 17 percent of its electricity from solar and wind.

When the eclipse hits and solar power supply starts to tumble, German energy providers and grid operators can respond with a combination of strategies — such as releasing energy stored behind hydroelectric dams, turning on quick-start natural gas power plants, or importing electricity from neighboring countries.

To complement those tactics, utilities could also modulate power demand — by encouraging their customers to avoid or delay electricity usage during the first half of the eclipse. This approach would resemble one that several American utilities deployed with Opower last summer to shave power demand by up to 5 percent.

Reciprocal strategies could be used when solar power quickly rebounds during the second half of the eclipse. Energy providers could store excess energy behind hydroelectric dams, ramp down gas power plants, export electricity to other countries, or help customers shift their electricity demand toward that time window.

Given the German power sector’s strong record of grid reliability and their strategic flexibility planning for March 20th, the country will likely navigate the day’s unique operational challenges without a hitch.

But in a future brimming with more solar power, one has to ask: could the situation posed by Germany’s solar eclipse become the norm, rather than the exception?

How March 20th Foreshadows the Future of Utilities and the Grid

Namely, how can utilities and grid operators achieve the large-scale flexibility required to embrace an energy resource that, by its nature, rapidly turns on and off — whether predictably due to eclipses and sunrises/sunsets, or unpredictably due to clouds and weather?

The challenge Germany confronts on March 20th may actually become a daily occurrence within 15 years, according to a presentation by one of the country’s largest electric transmission operators. Assuming the German government achieves its target of 66 gigawatts of solar capacity, a clear-sky sunrise in 2030 could drive an increase in solar power supply as steep as the rebound phase of 2015’s eclipse.

During sunrises in 2030, the scale of Germany’s solar installations could drive an increase in power supply as steep as the rebound phase of 2015’s eclipse (Source: Ecofys and 50hertz).

Grid authorities are facing a similar future in renewable energy powerhouses like California, which is striving toward 33 percent renewable electricity by 2020. One oft-cited statewide scenario suggests that at sunset during some parts of the year, the sudden drop in solar power will necessitate an extremely brisk ramp-up of non-solar resources (labeled “net load” in the chart below) to compensate for the sun’s departure and, simultaneously, to meet the evening’s high electric demand. 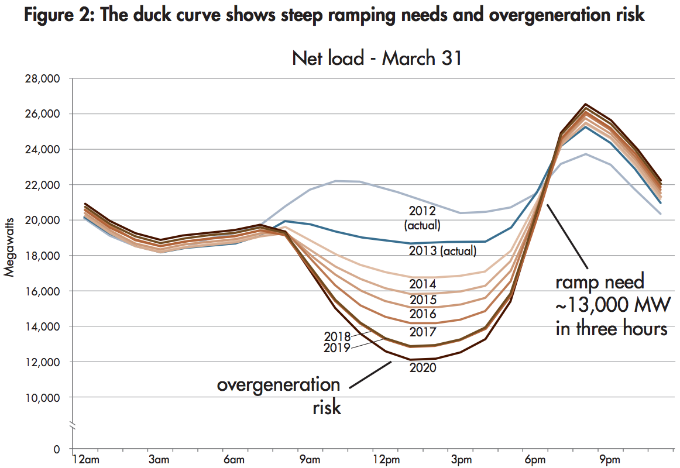 The “duck chart” suggests that flexible, non-solar energy resources will increasingly be called upon to compensate for the sudden drop in solar power when the sun goes down (Source: CAISO).

As the electricity produced by renewables like solar and wind continues to grow, the grid will inevitably see larger swings in power production. That’s why flexibility measures like fast-ramping power plants, adjustments to customer energy behavior, dynamic power pricing, energy storage, and a range of other strategies represent a critical dimension of the power grid’s evolution to meet the needs of the 21st century.

As far as upcoming eclipses go, it’s not just Germany that will get to showcase the flexibility of its electric system. America’s increasingly sun-fueled grid will be forced to adapt to the moon’s shadow for multiple hours in 2017, 2023, and 2024.

It will require ingenuity, but if we can put a man on the moon, innovative utilities will find ways to deal with the moon’s shadow. By doing so, they’ll be taking one small step toward creating the electric system of the future.

Special thanks to: John B Lee (graphics) and Casey Davis-Van Atta

Methodology and Technical Notes: Utility service points analyzed are located within a common area of the western United States bounded by a 200-mile radius. Usage statistics are per-household averages based on 15-minute-interval electricity consumption data measured on October 23rd, 2014.

Solar households (n=5,240) are defined as residential utility customers who possess an onsite renewable energy system that is bi-directionally interconnected with the electric grid, and that exported power to the grid on the day of the partial solar eclipse.

We portray Germany’s eclipse scenario as a tripling of solar panels relative to the western US. This portrayal is based on data from the Solar Energy Industries Association, suggesting that cumulative installed solar electric capacity across California, Arizona, Nevada, Colorado, and New Mexico is approximately 12 gigawatts. Germany’s installed photovoltaic capacity is estimated to be greater than 38 gigawatts.

We compare the German eclipse’s first-half impact to turning off a medium-sized power plant in Germany every minute for a full hour. This comparison is based on the prediction that, given clear skies, the reduction in solar output in the first 60-75 minutes of eclipse will be between 6,000 and 11,300 megawatts. Towards the lower end, this represents a change of ~100 megawatts per minute; the average size of a natural gas (“Erdgas”) power plant in Germany is also ~100 megawatts.

This blog was originally published on Opower and was republished with permission.