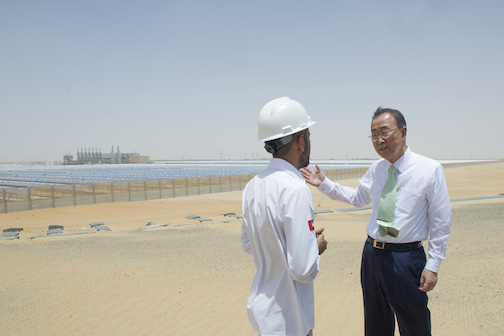 The U.S., with low-priced natural gas, is an anomaly. In much of the world, gas is expensive. So in sun-drenched Africa, Concentrated Solar Power (CSP) with its cheap thermal energy storage is competitive.

CSP competes directly with gas when it stores its solar thermal energy, as a dispatchable renewable, with a high capacity factor (able to work more hours per year). Parabolic trough is the more bankable original form, but tower can more cost-effectively incorporate storage. Its thermal energy storage can cycle daily for thirty years, and if untapped; stays hot for up to two months.

With no cheap gas, CSP is flourishing in the Africa and MENA (Middle East, North Africa) region.

Morocco is well embarked towards its CSP goal of nearly 2 GW by 2020 — double the U.S. total. Namibia has put out a request for proposals (RFP) to supply what amounts to 20 percent of its grid with CSP. Egypt and Algeria already have hybrid CSP projects, and have RFPs for more. All depend on imported natural gas. South Africa has a steady planned pipeline and the first half-gigawatt of CSP coming online.

In these markets, thermal energy storage was a requirement to replace more expensive imported gas. Morocco offers a 15 percent premium for solar after sunset. Namibia’s RFP requires 8 hours of storage. South Africa offers 270 percent of daytime rates in a carve-out for CSP with storage.

Whether due to fast-growing economies, decrepit coal plants, or underserved populations, these nations are also in dire need of additional generation.

By 2030 blackout-plagued South Africa must nearly double its electricity capacity, and plans 42 percent — nearly 18 GW — from renewables. Its premium for CSP-with-storage has created certainty for the industry.

Unlike the U.S., South Africa is not looking at batteries; lacking the lure of cheap gas waiting in the wings to take over afterwards. The “largest battery in the U.S.” at Tehachapi supplies just 32 MWh/day, and has a three to five-year cycle life.

A recent report from Greenpeace and SolarPaces sees CSP supplying 12 percent of the 2050 grid globally, given the right conditions.

“PV has had a huge deployment in the last 5 to 10 years, but CSP currently is at a much earlier stage of its deployment curve, so we expect costs to come down quite a lot,” explained SolarPACES Secretary Christoph Richter. 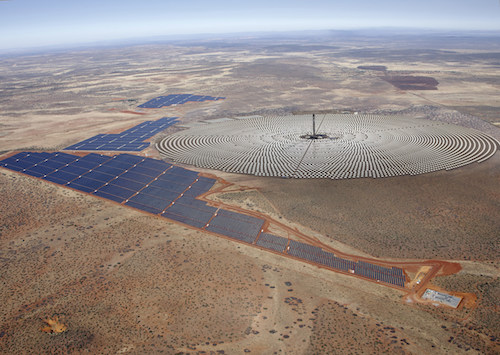 Richter works in Spain, home to CSP’s first wave of development. Within just four years, CSP supplied over 2 percent of the grid, but then Spain reneged on tariffs. No more was built.

“Initially, there was a very good political climate, but it wasn’t stable; it was completely cut down after the financial crisis. That’s detrimental for technologies that rely on industrial development like CSP,” he said.

South Africa looks more likely to stick by its policies, developed by a broad group of stakeholders. A steady series of auctions fill specific megawatt requirements of capacity. Achievable and predictable permitting precedes each bid. Projects get built because professionalism is a prerequisite.

“In order to bid in South Africa you have to have a 100 percent commitment on debt and equity on projects you’ve permitted,” said SolarReserve CEO Kevin Smith. “Altogether we’ve put together a funding package close to $4 billion.”

SolarReserve’s projects are oversubscribed, not just the Round 3 awarded Redstone tower with 12 hours of storage, but another near half-gigawatt of permitted bids coming up for Round 4.5 in 2016.

International banking agencies, like the World Bank, OPIC, and the Ex-Im, have prioritized powering Africa with renewables.

“There is a lot of interest in funding into Africa,” said Smith. “The key for them is finding good well-structured projects; we’ve got a good relationship with both the IFC and OPIC.”

Gigawatt Global COO Weldon Turner agreed, saying that as long as a developer can put together a good financeable project, there is more money chasing projects in African countries, than projects seeking funding.

The largest energy importer in the MENA region is Morocco; dependent on imported fossil fuels. It plans 42 percent solar by 2020.

Morocco just unveiled the first 160 MW of the planned 2 GW Noor CSP complex at Ouarzazate that will be completed by 2020 at nearly 600 MW.

ACWA Power has begun Noor II and III. A new RFP in January requests another 400 MW, combining PV and CSP with storage. 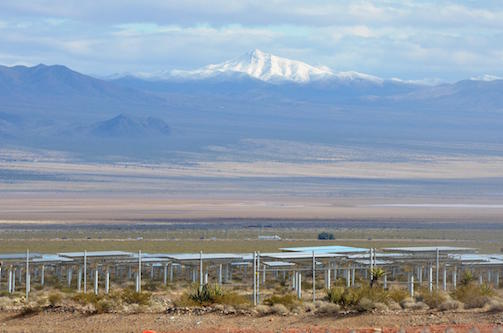 Image: Ivanpah, which was developed by BrightSource was heir to Luz, which was founded by a visionary, Arnold Goldman, who imagined a world powered with pure energy using just sunlight and water. Ivanpah uses a direct steam technology. Credit: BrightSource.

Morocco put together $3 billion to finance the 2 GW Noor-Ouarzazate complex with the World Bank, the Climate Investment Funds’ Clean Technology Fund, the African Development Bank, and European financing institutions. Once complete, Morocco will own and operate the project.

In these nations, CSP is seen not just as a hedge against more expensive imported fossil fuels but as a big jobs push and industrial development incentive as well.

“Morocco’s energy is mainly imported and that got really difficult to finance especially when oil prices were so high,” said Richter. “So they started looking at what they have in abundance; solar and wind, and also they see a high potential for job creation in Morocco.”

Equally dependent on imports, another likely spot for this kind of international funding is Namibia. Engineers at its financially stable state utility NamPower chose CSP to supply a fifth of its current needs. It has put out an RFP for 200 MW of CSP with 8 hours of storage, after carefully researching the best options for supplying its 2 million people.

CSP was born in the US.. with federal support after the second oil price shocks in 1979. Federal tax credits enabled one visionary pioneer, Arnold Goldman of Luz, to bootstrap the SEGS trough project. Its 354 MW developed over time, of financial necessity, in a series of 9 smaller units.

Next, Spain incentivized CSP development from 2004, but then reneged on tariff agreements, stranding a larger solar industrial sector. This left behind another 2.3 GW of CSP on the grid.

A second U.S. round powered by the Obama administration added 1.4 GW. 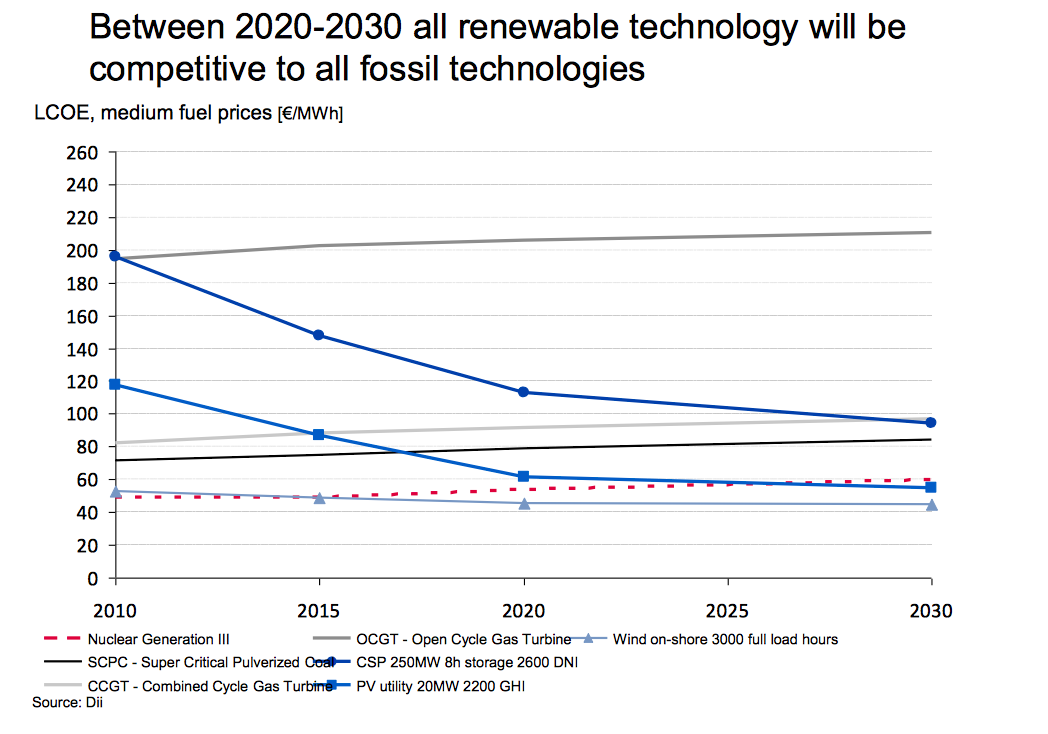 Two projects were the heirs to Luz: NextEra Energy had bought up most of the 9 SEGS units and gained the experience that enabled them to develop and now run California’s 250 MW Genesis trough plant. The engineers behind SEGS regrouped as BrightSource Energy, switching to direct steam tower for Ivanpah (390 MW).

But at least that many more projects failed to clear permitting. By 2013, as investors feared ITC expiration before a three-year project could be completed, the four year run ended.

By contrast, South Africa’s certainty is bringing prices down much faster. Redstone was awarded in 2015 at 12.5 cents, a third of the price of the first project bid in Round 1, Abengoa’s Kaxu Solar One at 32 cents. And at Atacama last year, Abengoa bid a third of the price of their first Spanish project, Helioenergy 1, the lowest yet at 11.5 cents.