The future of clean tech may depend upon technological advancements in an unsung hero: the lithium battery.

Small in size, the lithium battery — found in toys, laptops, mobile devices, and power tools — could soon become the primary energy source for cars and large-scale grids. This common battery may very well not only keep the Energizer Bunny going and going – but humans, too, as we strive to live sustainably on a green planet.

As quickly as winds change direction, developments in battery technology paradigms are having a disruptive impact on product design in the dynamic clean tech sector.  Innovative companies require manufacturing tools, such as PLM, that enable them to more efficiently embrace chance and shift product directions quickly to stay competitive.

The Common Battery: The Key to Sustainability

Before we peer into the future of storage, let’s start by looking back at the history of batteries, especially Lithium, which as come along way from the crude Baghdad Batteries of 2500 BC.

Lithium-ion (LiB) batteries were first proposed in the 1970’s and commercially developed in the 1990’s. Since then, the market for lithium-ion batteries has grown to $11 billion (2010) and is expected to reach $43 billion by 2020. According to the Global Industry Analysts (GIA), the global market for all consumer batteries is forecasted to reach US$55.4 billion by the year 2017.

According to the 2012 World Batteries Market Report, world demand for primary and secondary batteries is collectively forecasted to rise 8.5 percent per year to $144 billion in 2016. China is predicted to remain the largest national market for batteries and will also be the fastest growing market, bolstered by a large electronics manufacturing segment as well as expanding output and use of motor vehicles. Sales of batteries in India will expand only slightly slower than those in China, as the nation’s manufacturing base continues to grow and personal incomes rise.

The report forecasts that sales to consumer markets will post the fastest gains through 2016. Rising incomes in developing nations will drive greater use of basic battery powered devices, while expanding use of portable electronics will fuel demand from the consumer market worldwide. The report went on to note that demand for secondary battery types is expected to rise at a faster rate than sales of primary batteries.

The popularity of portable electronics has grown rapidly, expanding the share of the market held by secondary — especially lithium — battery suppliers. According to a recent Marketresearch.com report, the cost of Li-ion batteries will dip 45 percent by 2022. Li-ion batteries may lose market share to cheaper molten-salt batteries for large projects but will remain the system of choice for space-constrained projects because of the battery’s high energy density.

The LiB market is expected to continue to grow at an annual rate of about 10 percent by capacity volume. The strong demand for electronic devices would also support the demand for Nickel-Metal Hydride (NiMH) batteries to a certain extent (readily available in retail stores in the common sizes AAA and AA, used as small rechargeable batteries).

An Increasing Demand for Renewable Batteries

The automotive battery market suppliers will benefit from increased output of hybrid and electric vehicles, as well as from rising production and use of standard automobiles. The market for electric-vehicle energy storage devices is expected to grow from $7.7 billion in 2010 to $14.5 billion in 2015, according to a report from Lux Research. The electric transport sector has four types of rechargeable batteries:

An interesting finding in a recent Lux Research “Alternative Power and Energy Storage Service” report predicted that e-bikes and scooters — not automobiles — will drive the biggest growth for these batteries in the next five years. The e-bike and scooter market is forecasted to grow from a $6.4 billion market in 2010 to $10.9 billion in 2015. Policy makers, auto manufacturers and the media have locked their attention on battery technologies for plug-in and electric vehicles.

Batteries Not on the Grid…Yet

Sales of batteries for use in industrial applications and grid storage will be driven by increasing levels of gross fixed investment, global manufacturing output, and efforts toward industrialization in developing nations.

A recent MarketResearch.com report claims that the default option for grid batteries today is lead-acid, accounting for more than 55 percent of revenues from grid batteries currently. By 2018, the share will decline to around 30 percent as new grid battery technologies become commercialized. The lead-acid battery will itself get an upgrade; carbon electrodes, promising a 4x performance improvement. In addition, the ultrabattery, with combination lead/carbon electrodes, will compete for grid-storage markets. In 2018, lead-carbon batteries/ultrabatteries will generate around $300 million in revenues. 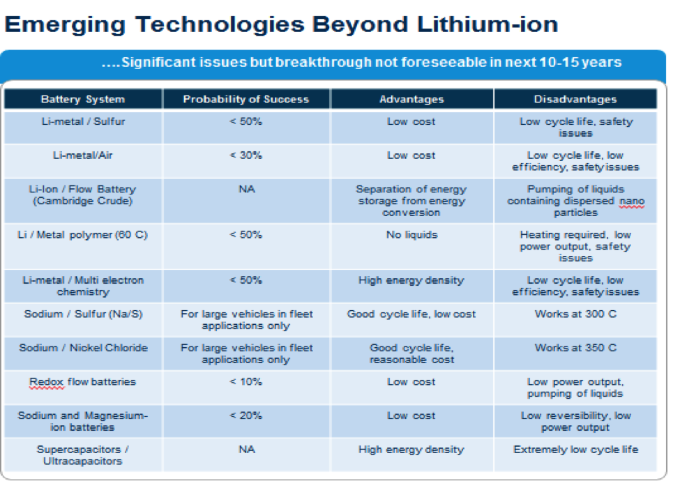 Lithium-ion will dominate the consumer and automotive markets for a long time due to their high efficiency and energy density, long cycle and calendar life, and manageable safety. Further increase in energy density is possible with lithium metal systems. But intrinsic problems with reversibility, cyclability and safety of lithium metal must be overcome to make the systems more viable.

Continuous research and development is taking place to improve the efficiency and reduce the size of lithium-ion batteries. In August 2012, researchers at the Korea Advanced Institute of Science and Technology (KAIST) developed a solid state, think-film lithium-ion battery, claiming it had the highest energy density ever achieved for a flexible battery.

Another trend revolutionizing the batteryindustry is the development of an ultra-thin, flexible, lithium polymer battery that could usher in future e-readers and tablets that could be paper thin and partially foldable.

A thriving clean tech ecosystem for battery development requires collaboration among advanced battery technology entrepreneurs, research institutions and governments that provide policies and incentives to foster exploration of new storage technologies. While some batteries, such as the lithium-ion, may be small in size, they will play a big role in unlocking the future of renewable energy’s potential.

New advancements in storage technologies are ushering in an era of rebirth and unlimited possibilities in renewable energy. Just recently, a company called Solid Power demonstrated proof they were close to creating a lithium metal battery that could double the range of electric cars a commercial reality.

This breakthrough has the potential to dramatically change the entire electric car industry.

Smart product lifecycle management (PLM) tools allow OEMS to incorporate game-changing innovations, such as those made in batteries, in their BOM and change product design direction at the drop of a dime.

Change happens fast and manufacturers must react quickly to embrace it. So ask yourself — when opportunity in clean tech knocks — will you have the right PLM solution in place to make sure your company can embrace new technologies and quickly change product design directions to scale when and where the market demands?