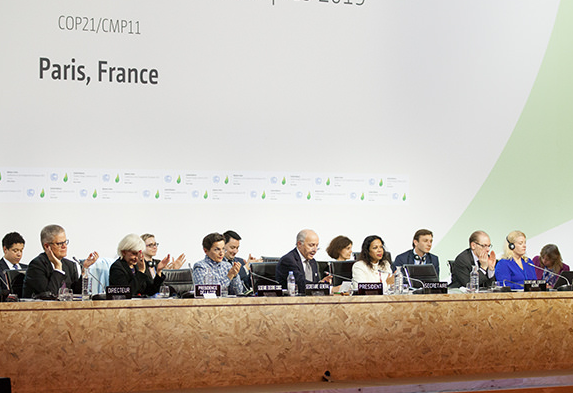 Editor’s Note: This is the second part of a two-part article looking at the efforts that have come out of the Conference of the Parties and the Paris Agreement. Read part one of this article here.

COP22: Opening an Access for Africa as Regards Agriculture and Renewable energy

If global warming is planetary, its negative impacts and consequences are visible everywhere, but are different in nature from region to region. It is more destructive for poor countries, especially African countries which contribute less than 4 percent of global GHG emissions. Morocco has made a great effort to adapt to the CC through its dam construction strategy, the solar thermal of Noor I, II, III and its experience in the field of agriculture and the development of renewable energy. It could be considered as an exemplary African country for adaptation to climate change (CC).

Currently, Morocco has 139 large dams, to satisfy the demand for drinking water and to rationalize the traditional resources of the water, resulting from the rain, storing more than 18 billion m3. The hydropower potential exploitable in Morocco is estimated at 5,000 GW, but only a quarter is currently exploited. It has 20 large dams equipped with hydroelectric power stations. The largest has a capacity of 240 MW. Over the past decade, the contribution of hydropower has been between 5.1 percent and 13.7 percent of net electricity consumption, depending on rainfall.

On the occasion of the COP22, Morocco launched the “African Agriculture Adaptation (AAA)” initiatives as food security becomes increasingly critical due to erratic weather conditions and to help African farmers to adapt to CC. It also submitted an ambitious national plan to the United Nations Framework Convention on Climate Change (UNFCCC), committing to reduce its GHG emissions, particularly in agriculture, by 32 percent by 2030.

Morocco has no reserves of fossil fuels and therefore depends almost entirely on imports. But, it is strong in terms of solar and wind potential. In fighting global warming and reducing its energy dependency, in 2015, the King, Mohammed VI, urged the country to increase its share of renewable power electricity installation to 52 percent by 2030. It has created the Moroccan Agency for Sustainable Development (MASEN) to overcome the obstacles of the legislation and to establish a framework favorable to the development of renewable energy. In 2015, it completely eliminated the subsidies of petroleum products. It is the second African country to invest in renewable energy.

The first power plant integrating solar energy (20 MW) was built in 2010 in Oujda. It is a Solar-Natural Gas Hybrid Plant (472 MW). The second giant solar power plant Noor I (160 MW) was completed in 2016 in Ouarzazate. It uses concentrated solar technology (CSP), with a three-hour electricity storage capacity, which can be used during peak hours. A second unit Noor II (200 MW), currently under construction, uses the same CSP technology, but with a storage capacity of seven hours.

Concerning the environmental side of the development of solar energy, the cost is an important factor. The launch of the CSP project in Ouarzazate led the price of electricity generated by this type of technology to decrease to about $ 0.16 per kWh, but this seems expensive compared to photovoltaic which is of the order of $0.03 per kWh.

On the occasion of COP22, MASEN and the National Office of Electricity (ONE) signed with the German Development Bank (KFW) a financing contract worth $60 million for the development of three photovoltaic power plants in Ouarzazate (70 MW), Laâyoune (30 MW) and Boujdour (30 MW). The contract awarded for design, financing, construction and maintenance is none other than ACWA Power Saoudian consortium after winning an international tender.

Morocco is also investing in wind energy. The first park (50 MW) was installed in 2000 in Tetouan. However, the largest (301 MW) is the Tarfaya one, installed in 2014. It is the largest in Africa. The installed wind farm has increased capacity from 50 MW in 2000 to 757.3 MW in 2014, producing 5.1 percent of the average net electricity consumption in Morocco. The Taza park (150 MW), built by Electricité De France (EDF), was put into service in 2016. The cost of wind power in Morocco is now competitive with that of petroleum products.

Other wind farms, mainly in southern Morocco, with a total capacity of 700 MW, recently put out for tender. A consortium, set up by Enel Green Power, Nareva and Siemens, won, in 2016, an offer to build four new wind farms at different sites across Morocco, at a cost of only $0.03 per kWh, one of the lowest in the world. This is an enormous increase, which brings Morocco closer to its goal of installing 14 percent of its national electrical power from wind energy by 2030.

COP22: Results of the Multilateral Negotiations

For the first time, at the time of COP22 in Marrakech, 197 signatory countries, represented by the Committee in Charge of the Application (CMA) created by COP21, were able to debate more than 35 points, relating to “Climate Finance” and the strengthening of the capacity of the poorest countries, threatened by global warming. The points being considered are selected from the results/agreements, action plan on climate, several initiatives launched by the civil society actors and the “Marrakesh Declaration”, which was adopted at COP22 for the environment and the sustainable development agenda. This shows that there is a strong political will at the highest level to promote and implement the Paris Agreement.

Among the most important results from COP22 are:

1.  The launching of the initiative “Agriculture African Adaptation (AAA)” for CC,

2.  The launching of the Mohammed VI’s prize for environment and sustainable development, with a value of $1 million,

3.  The announcement of “Marrakech Partnership” action 2017-2020 for climate and the launching of the road map for 2050, to mobilize a broad coalition of government agencies, enterprises and companies for a transition to a sustainable economy based on renewable energy resources, low-carbon and sustainable development,

4.  The Marrakech World-wide Partnership for Renewable Energy and Energy Efficiency was launched to consolidate the results of COP21 and COP22 in the energy sector and accelerate the transition to global clean energy systems through information sharing, more funding and transparency, and identifying the driving keys of public policy,

5. The funding of “Green Climate” of $3 billion for less developed countries to finance their national projects,

7.  The adoption of a five-year action plan in the frame work of the “Varsovie International” mechanisms, exclusive to losses and damages related to the effects of CC. The creation of a team to formulate recommendations for an integrated approach on the prevention and the reduction of human displacement was also approved by the Executive Committee,

8.  The realization of significant progress to convert the “Adaptation Fund,” which was created in accordance with the Kyoto Protocol, as a tool among those of the Paris Agreement. Several countries announced their contributions to the fund, raising the level of available funds to more than 80 billion dollars,

10.  The funding of $50 million was announced for the Capacity Building Initiative for Transparency (CBIT) to strengthen the institutional and technical capacities of developing countries to meet the enhanced transparency requirements of the Paris Agreement,

11.  The countries have pledged more than $23 million to the Climate Technology Center and Network (CTCN), which supports developing countries in the development and transfer of climate technologies. As an implementing entity of the Technological Mechanism, the CTCN is a key institution to enable countries to meet their commitments in accordance with the Paris Agreement,

COP23: Task of the Moroccan Presidency of COP22

The French economist Laurence Tubiana declared: “The Paris Agreement on Climate is a self-fulfilling prophecy.” For this climate negotiator, the ratification of the text is not enough. Only if policy makers adhere to the Paris Agreement dynamically, companies and NGOs can achieve the objective adopted in Paris in 2015. It was very important to have a document in the Paris Agreement that was as precise and as ambitious as possible. However, she was convinced that a legal text would not be enough to guarantee the transition to a low-carbon economy.”

The Moroccan presidency contribution and the added value of COP22 will be:

It is not an easy task for the Moroccan presidency of COP22, as long as the objective of this congress is to limit planetary warming by two degrees Celsius, on average. But, this is about reorienting the global economy towards a low-carbon model. The stakes are important since it is a matter of changing civilizational paradigm and reinforcing intergenerational solidarity. On top of this is the environmental disparity between the North and the South; which depends on priority and means.

Each state tries first to guarantee its well-being and competitiveness. This is how the world works. In addition, human activity needs energy. It is not by decreasing human activity that the pollution of the atmosphere is reduced, but it is certainly necessary to save energy where it is possible, but above all to produce clean energy without polluting the environment. The global CO2 emissions came mainly from China (28 percent) in 2013, the U.S. (14 percent), the EU (10 percent) and India (7 percent), 59 percent in total, so a general agreement cannot be made without them.

Since oil is still essential for the energy supply and the profit economy of the industrialized countries, it must be guaranteed by all means. However, the rescue of the climate, holder of the future, requires a good political will of the governments and the willingness of NGOs to confront the business stakeholders so strongly that they decide in favor of the protection of the environment

This requires, according to the French physicist, Sébastien Balibar, that the government must agree on a common objective of a ton and half of CO2 emissions per inhabitant in 2050, which ensures that the limit of two degrees Celsius of warming will not be exceeded. In the case of agreement on this universal principle, it would be each country’s responsibility, to define the scenario appropriate to its particular situation in order to achieve the relevant common objective.

The aim is to establish a worldwide system of carbon taxes and licenses for CO2 emissions. These two types of solution, which are not necessarily contradictory to one another, could both encourage rich countries to reduce their level of pollution and help poor countries to acquire decarbonized energy, without harming their just right to development and to support their research and technology transfer.