More
Home Baseload What the Energy Future Looks Like: West Village, University of California at...

In the global competition for appealing clean energy solutions, a leading entry is the new West Village at the University of California at Davis (UC Davis), which today celebrated significant progress toward its goal of becoming the largest planned “zero-net energy” community in the United States. 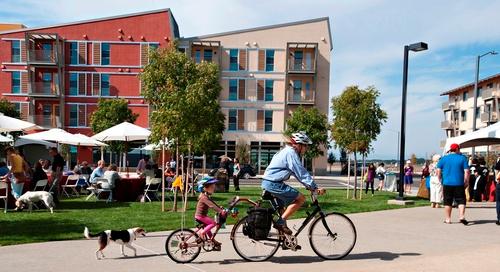 Seven years ago, I was one of nine jurors who selected the winner in a competition to establish the nation’s first university-based center on energy efficiency (and yes, it’s hard to believe that this didn’t happen until 2006!). UC Davis finished first in a distinguished field, and it has more than justified expectations in the years since.

Among the Energy Efficiency Center’s proudest achievements is the beautifully designed space next to the main campus that bills itself as the nation’s largest planned community to reach “net zero” — annually consuming less electricity than it produces while emitting no carbon pollution.

The “West Village” is proceeding in stages and will ultimately house 3,000 students, along with 500 staff and faculty families and a cluster of retail and commercial buildings. By making those buildings far more energy efficient than even California’s rigorous standards require, the West Village architects were able to balance all their projected electricity needs with onsite solar photovoltaic (PV) power production. The UC Davis Center made a commitment to regular evaluations of the West Village’s performance, too, and the inaugural report was released this week.

In the first year of substantial occupancy and fully powered PV systems, roughly 1,500 people in more than 500 apartments and a half-dozen mixed-use buildings came hearteningly close to “zero net-energy”: about 87 percent of the way, to be precise. Thanks to local experts from the Davis Energy Group, we know pretty much exactly what caused the gap, and what to do about it.

The solar power systems performed pretty much exactly as advertised, although the evaluators think we can squeeze out a few more megawatt-hours of electricity with occasional cleanings of the solar panels (to remove dust emanating from local agricultural operations). Also operating as predicted were the buildings’ cooling and heating systems, and the one- and two-bedroom apartment units taken as a group. Consumption was higher than expected in two principal categories: three- and four-bedroom units, whose occupants loaded up on plug-in electronics and showed remarkable variation in monthly electricity use; and water heat, where a high-efficiency technology relatively new to U.S. markets (heat pumps) created some siting and operational problems that contributed to higher power use. 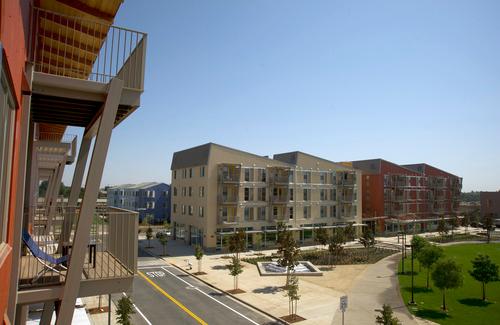 The West Village managers are confident that they can cover the remaining distance to “zero net energy,” and I agree with them. The water heating glitches are already mostly fixed. For the larger apartments, a host of strategies are being deployed to identify and motivate the largest electricity users to waste less energy, starting with the repeatedly proven social science insight that the best way to change behavior is simply to show people that their neighbors are doing better.

Regular performance reports will help with that message, as well as show the world continuing progress and any remaining barriers to reaching the community’s laudatory goals.

The next West Village performance review is due in early 2015. I look forward to sharing the results, and I’ll close with the quote that I authorized for use in the news release accompanying today’s report:

“The West Village is what a sustainable energy future looks like for California and the rest of the world.  Its commitment to comprehensive evaluations like this one is an important part of the good example that the community is setting for all the rest of us.”

This article was originally published on NRDC’s Switchboard and was republished with permission.