More
Home Baseload What’s Next? EU, US and Colombia Show They’re Moving Forward with the... 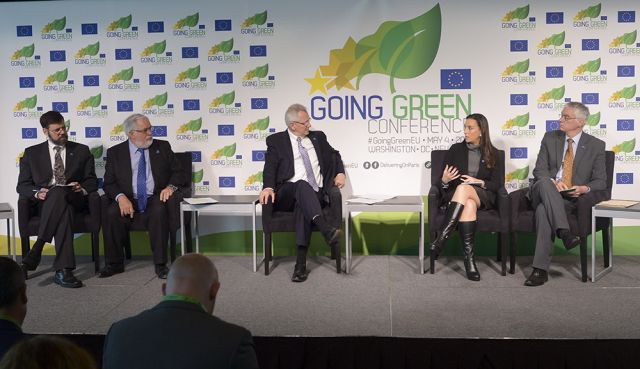 Less than two weeks after 175 nations signed the pivotal Paris Agreement on climate change, a question lingers: What happens now?

“There’s a cognitive dissonance we’re all in at the moment,” said WRI President and CEO Andrew Steer at a panel he moderated at the Going Green conference in Washington, D.C. “We understandably feel a great satisfaction and joy at the historic Agreement. But at the same time we know it’s not enough. We need to do more. We need to implement.”

For the Paris Agreement to go into effect, 55 countries representing at least 55 percent of global greenhouse gas emissions will have to formally join—so far, 15 nations have signed and also joined by ratifying the Agreement. But leaders from the European Union, United States and Colombia said they’re moving forward with the Agreement even before they officially join it.

At a panel discussion at the Going Green conference, EU Commissioner for Climate Action and Energy Miguel Arias Cañete, U.S. Special Envoy for Climate Change Jonathan Pershing, and Colombian Director for Economic, Social and Environmental Multilateral Affairs Andrea Guerrero Garcia revealed key climate actions each country is already taking, as well as what’s needed in the long term to reach the goals of the Paris Agreement. The conference was held in tandem with Climate Action 2016, the largest gathering of climate actors since COP21 in Paris.

Cañete said that the EU will join the Agreement “as soon as possible,” and is planning important steps to do that. This is no easy feat considering that all 28 member states must go through their individual domestic approval processes to ratify the treaty before the EU as a whole can join. The fact that it’s committing to join early shows that the Agreement is a big priority. “We are ready to set the wheels in motion,” Cañete said. “More important than the ratification is the full implementation.”

The EU has goals to reduce its emissions at least 40 percent below 1990 levels by 2030. Cañete said the region’s emissions-trading scheme will help meet this target, and the EU will also foster greater global adoption of a carbon price by cooperating with China to develop its own emissions-trading market and interlink the two programs.

The Obama administration committed to reduce U.S. emissions 26-28 percent below 2005 levels by 2025. “We have some measures in place to achieve this, but not all,” Pershing said.

The country is already on track to halve its emissions from cars and trucks by 2025, said Bob Perciasepe, president of the Center for Climate and Energy Solutions, and is investing more in renewable energy than in fossil fuels. And while the cornerstone of the president’s climate initiatives, the Clean Power Plan, is on hold while the Supreme Court evaluates legal challenges, Pershing expects it to move forward and play a big role in achieving the 26-28 percent target. “Historically, the Supreme Court has given us not only the authority, but the mandate to move forward in this area,” Pershing said.

Despite its small contribution to climate change—responsible for 0.41 percent of global emissions—Colombia is taking the Paris Agreement seriously because it’s already experiencing the acute effects of a warmer world. “For us, it’s very strange to hear about climate skeptics because we have the opposite problem,” Garcia said. “We see people very worried with water scarcity and intense flooding.”

Colombia committed to reduce its emissions 20 percent below business-as-usual projections by 2030, and is employing a Low-Carbon Development Strategy, a National Adaptation Plan and a commitment to achieve zero net deforestation in the Amazon by 2020. Encouragingly, Garcia also sees increased renewable energy deployment as a win-win—a strategy to both curb climate change and increase energy access for rural communities. “It’s becoming a beacon of hope for these communities,” she said. “[Before renewable energy] connecting them to the grid was so expensive and would have taken so much infrastructure.”

Thinking About the Long Term

While the national commitments under the Paris Agreement are the most ambitious to date, they’re still not enough to meet its long-term goals—preventing the worst climate impacts by limiting global temperature rise to well below 2 degrees C (3.6 degrees F), with an aim for 1.5 degrees C (2.7 degrees F). And that’s very much on leaders’ minds.

The EU and United States are both working on strategies for their 2050 emissions-reduction goals. Pershing said the United States would release its plan along with Canada by the end of this year.

“Every single technology will need to be applied—not just renewables, but enormous gains in efficiency, carbon capture and sequestration,” Pershing said. “Every single lever you have to pull has to be used.”

This article was originally published by the World Resources Institute under a Creative Commons license. The article was edited for style and some links were amended or omitted.