More
Home Blogs What New Energy Can Do

Too many of the folks who are committed to protecting the invisible hand of the free market will allow no abridgements to the many federal subsidies and protections for the fossil fuel industries. It is more than a hypocritical contradiction. It is an obstruction.

In two ways it obstructs many valuable things. With the excuse that fossil fuels are the “only practical” answer, it obstructs the shift of half-century-old and century-old subsidies to today’s needs. With the “holiness” of the free market as an excuse, it obstructs support for New Energy and Energy Efficiency. By obstructing the emergence of the New Energy economy, these hypocritical Old Energy advocates obstruct greater energy security and freedom from oil dependence for the country, the revenues, jobs, and economic expansion that will follow a New Energy economy, and the blessings of enhanced stewardship for this good earth.

The entwined insistence on (a) an unregulated free market that doesn’t actually exist and (b) protections for the fossil fuels’ advantages that keep the unsupported energies down obstructs one other thing: The world’s efforts to take concerted action against worsening climate change caused, the vast preponderance of scientific evidence verifies, by the greenhouse gases spewed by burning of fossil fuels. Not so coincidentally, the fossil-foolish defenders of a non-existent unregulated free market are largely the same folks who insist there is nothing human activity can do to impact climate change.

Happily, Energy Technology Perspectives (ETP) 2010, a new report from the International Energy Agency (IEA) says the community of nations seems to slowly be turning the tide on this contingent of obstructionists and showing what New Energy can do. Even better, there are emerging reports that President Obama has successively joined with leaders of the G20 nations in action to take back the fossil fuel subsidies. (See OBAMA-LED WORLD OIL SUBSIDY CUTS)

Evidence of what a New Energy economy can do cited in the IEA report: (1) World investment in New Energy electricity generating capacity (especially wind and solar) was a record $112 billion in 2008 and stable in 2009 despite the recession. (2) The top tier of international carmakers are preparing to bring battery electric vehicles (BEVs) to showrooms and market predictions foresee 5 million BEVs in service by 2020. (3) The developed economies of the Organization for Economic Cooperation and Development (OECD) are increasing their Energy Efficiencies at ~2% per year, twice the 1990s rate. (4) New Energy and Energy Efficiency research, development and demonstration (RD&D) investment increased by one-third from 2005 to 2008, turning around a quarter-century downward trend, and the major economies are expected to double RD&D investment by 2015. ::continue:: 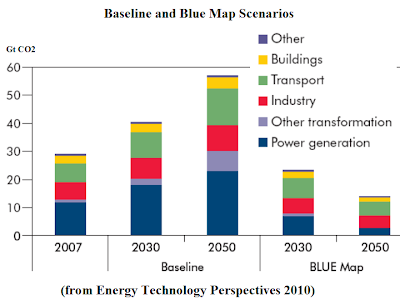 ETP 2010 acknowledges the trends but says they are still too fragmented, slow, and fragile. Greenhouse gas emissions (GhGs) levels continue to rise. The obstructionists are still winning because they are blocking concerted, unified, unhesitating action. If they succeed in sustaining business-as-usual (BAU) and preventing aggressive changes, the report foresees continued fossil fuel dependence and GhGs doubling by mid-century.

With the policy changes it lays out in its BLUE Map scenario, however, a New Energy economy can be affordably built that will cut GhGs in half by 2050 and keep the global average temperature increase at or below 3o C. while moving the world away from oil dependence and developing secure domestic energy sources and the revenues, jobs and economic expansion they offer.

Energy Efficiency (EE) will be one key because it is the cheapest and most accessible way to cut GhGs and because it will immediately generate savings that can fund the building of New Energy infrastructure. Developing economies must replicate the developed nations’ EE improvements.

The world must also rapidly grow New Energy capacity. The IEA report includes nuclear energy and “clean” coal (carbon capture and storage, CCS) capacity as well. Perhaps by mid-century these technologies will be financially feasible. By 2050, the IEA calls for moving today’s 18% of electricity from emissions-free sources to ~50%, leading to the use of 50+% BEVs for personal transport.

The cost: $46 trillion more than BAU, mostly in consumer spending for NE, EE equipment and the purchase of BEVs. The return on investment from energy savings: $112 trillion, not counting other economic, social and environmental benefits.

Note: The 2010-to-2020 decade is crucial to keeping the cost of fighting climate change within reach. If GhGs do not peak and start falling by 2020, the cost to stop catastrophic climate change could make stopping it unachievable.

Final point: The IEA is the most conservative of organizations plotting the future of New Energy. If the IEA says New Energy can do this much, it is highly likely it can do much more. 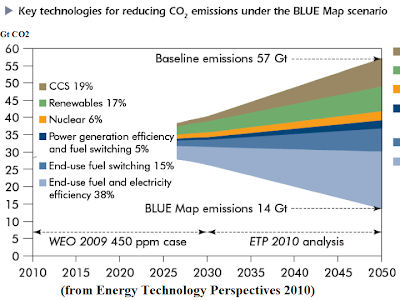 This post is based on IEA sees the first early signs of an energy technology revolution underway across the globe but urges that much more needs to be done to achieve the necessary long-term CO2 cuts (1 July 2010, International Energy Agency)