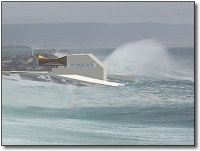 Waves off the Eastern seaboard could soon be tapped for their relentless, renewable energy. Through a U.S. subsidiary, Australia-based Energetech revealed plans to launch a US$3.5 million wave energy pilot project “GreenWave Rhode Island,” which could be the first of its kind off the eastern US seaboard. The plan has officially received the financial backing of three New England states that will benefit from the project’s renewable power.

Deep River, Connecticut – September 8, 2004 [SolarAccess.com] “Harnessing ocean energy has the potential to produce a virtually limitless supply of pollution-free electricity to help meet U.S. and the world’s growing energy needs,” said Dr. Tom Denniss, chief executive of Energetech Australia, the parent company of its Connecticut-based U.S. subsidiary Energetech America. “GreenWave Rhode Island is a major milestone in the development of clean technologies to tap the world’s most plentiful natural resource.” Energetech has developed a unique technology using what they call an “oscillating water column” (OWC) as a key component. For two decades, Energetech said OWCs have been the world’s foremost wave energy technology, demonstrating proven results in numerous projects. Energetech’s technology enhances OWC’s commercial viability. In brief, the up-and-down movement of waves forces air to rush into a hollow chamber where it is compressed, turning a turbine and powering the generator. The structure, with its four legs resting on small pads on the ocean floor, is stabilized by cables moored to the seabed. The project, which is planned to operate for three years, has received $1 million in planning and development funds from the public renewable energy funds of three New England States (Rhode Island, Massachusetts and Connecticut). “Moving America forward on a path toward greater energy independence that will create new jobs and lead to a healthier environment cannot be achieved by the work of a single state,” said Rob Pratt, Director of the Massachusetts Renewable Energy Trust. “We are proud to participate in this multi-state coalition working to advance wave energy technology, which has enormous potential to help us build a cleaner energy future.” Company officials said the facility is planned as a not-for-profit operation intended to demonstrate the commercial viability of its wave energy technology. Research for the project is being conducted by the University of Rhode Island (URI), world-renowned for oceanographic science and education. Plans call for electricity to be transmitted via a cable under the seabed to an existing transmission line on the mainland, where it interconnects with the New England power system. GreenWave Rhode Island will produce up to 500 kW of electricity, enough to power approximately 300 average households. Dr. Denniss said the keys to a successful project include a favorable wave climate, proximity to the area’s electric power system, and suitable bathymetric conditions (contour of the ocean floor). The company examined the waters off New England’s four coastal states and found the Point Judith, Rhode Island, area ideally suited for the project. Based on URI research, the best location is a quarter-square-mile area more than a mile from the mainland. URI researchers are analyzing that area to help identify the best spot for the project. The structure will measure approximately 100′ X 120′ X 40′ high above the water surface. It will be designed by internationally renowned marine engineers according to a rigorous marine engineering design code to withstand the area’s sometimes severe storms. Denniss said a visual study by an independent environmental company confirms that the distance of the project from shore will make it barely visible from most locations. Plans call for the structure to be fabricated in Rhode Island and floated to the site, where installation will take about one week. Dr. Denniss, an expert in oceanography and ocean energy systems, said the project will preserve marine life and not interfere with recreational or commercial uses of coastal waters. Energetech expects to submit an application with state and federal permitting authorities late this year. Green- Wave Rhode Island must undergo a comprehensive review by state and federal permitting authorities to ensure it complies with environmental, navigational and other applicable regulations. “If approved, this project presents an opportunity for developing a promising and abundant renewable resource,” Janice McClanaghan, Director of the RI State Energy Office. The project is expected to being operations in 2006. Later this year, Energetech is expected to begin operations at its Port Kembla, Australia project, which received government approval in 2003. Preliminary work is also underway on projects in Canada, Spain and other locations.