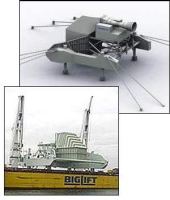 Port Kembla, Australia [RenewableEnergyAccess.com] After years of planning and development, the wave energy approach proposed by the Australia-based Energetech is about to be tested at a full-scale level in the ocean for the first time. After being fabricated the main structural component of the device arrived at Port Kembla, Australia on board a specially-designed heavy lift vessel.

While more entrenched renewable energy technologies like wind power have settled on a particular design for success — large towers with horizontal-axis wind turbines consisting of three blades — quixotic wave and ocean energy entrepreneurs are still exploring the seemingly infinite possibility of designs. Eventually, certain designs will prove most effective and become the industry standard. The Energetech deployment will be another step along that path. Energetech has worked collaboratively with JP Kenny to design a moored ocean energy structure made of structural steel. The basic structure weighs in at 485 tons, with dimensions of 40m by 35m by 18m. The structure had spent the previous two weeks being shipped from Batam in Indonesia, where it had been fabricated. The device was lifted off the transport ship and into the waters of Port Kembla Harbor before being towed to the No. 6 Jetty. It will spend the next few months being fitted out with the new Energetech turbine and hi-tech components prior to final installation off the eastern breakwater of Port Kembla Harbour early next year. In brief, the Energetech approach employs a parabolic wall to focus wave energy onto an Oscillating Water Column (OWC) chamber. The rising and falling motion of the waves causes an oscillatory water motion within the chamber, which in turn forces a high-speed airflow past a unique controllable turbine. The turbine then drives an induction generator to produce electrical power. System components are computer controlled to optimize energy conversion in a range of conditions and to automatically protect system components and ensure safety. The Energetech system can be deployed as a single device, or strung together in a series, similar in concept to wind energy’s “wind farms.” The plant will be connected to the local power grid by an 11 kV cable. The energy will be purchased by local power utility, Integral Energy, and sold to residents in the local community. After commissioning, the device should supply useful power to up to 500 homes and serve as a valuable test facility for further technology development. Construction is currently underway. Most of the system components will be manufactured and partially assembled off-site. These will then be transported to the site and installed. The scheduled completion date of the Port Kembla Wave Energy Plant is February 2005. If all goes well at Port Kembla, Energetech’s device is likely to be deployed off the Eastern Seaboard of the United States as well. In August of this year, Energetech received $1 million in planning and development funds from the public renewable energy funds of three New England States (Rhode Island, Massachusetts and Connecticut) for a three-year deployment of their device. The proposed 500 kW ocean wave-demonstration facility will be located at Point Judith Harbor in Rhode Island as part of a multi-state effort with Connecticut, Massachusetts and Rhode Island.