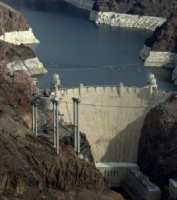 BOULDER CITY, Nev. The U.S. Bureau of Reclamation will increase its water releases from Lake Powell to Lake Mead in Water Year 2015, following the recent completion of its monthly operational study.

The release will increase from 7.48 million acre-fee (maf) in Water Year 2014 to 8.23 maf in the coming year, the agency said, with Lake Mead operating under normal conditions in Calendar Year 2015. Water users in the Lower Colorado River Basin and Mexico will also receive their full water orders.

HydroWorld.com reported in July that Lake Mead — impounded by Hoover Dam — had dipped to its lowest levels since the 1930s after Reclamation forecast lower water releases into the lake in August 2013 due to what is now being called a 15-year drought.

The bureau said runoff in the Upper Colorado River Basin was 94% of average in 2014, compared to 47% in 2013 and 45% in 2012. Despite the increased runoff, however, Reclamation said the elevation of Lake Mead is projected to continue to decrease in the coming year, falling from its current 1,080 feet.

The 2007 Interim Guidelines dictate Reclamation will perform another review of conditions at Lake Powell and Lake Mead in April 2015, at which point the releases from Powell could be increased to 9.0 maf for Water Year 2015.

Reclamation said its long-term hydrologic models show the first chance for reduced water deliveries into the Lower Basin are in 2016.