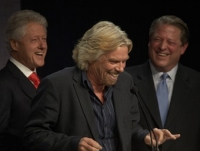 Peterborough, New Hampshire [RenewableEnergyAccess.com] Out of an estimated $7.3 billion pledged to address issues such as poverty, disease, conflict and climate change at the Clinton Global Initiative (CGI) last week, nearly half of it will go toward renewable energy projects thanks to a $3 billion pledge by British business mogul Sir Richard Branson.

The founder of Virgin and Virgin Atlantic Airlines, Branson announced at the CGI he would invest all future profits of the Virgin Group’s transportation businesses — mainly airlines and trains — into renewable energy initiatives both within his own transportation companies and in new biofuel research and development projects. “If we can develop alternative fuels, if people can take risks on developing enzymes, if we can try to get cellulosic ethanol, then replace the dirty fuels that we are using at the moment. Then I think we have got a great future, I do,” said Branson at the CGI. The 10-year, $3 billion commitment follows the launch of his newest company earlier this month, Virgin Fuels, which pledged to invest up to $400 million dollars in renewable energy initiatives over the next three years, starting with the California-based ethanol company, Cilion, Inc. “What Richard Branson did here is truly wonderful. But you don’t have to have $3 billion to commit over ten years to replicate it. It will get a lot of press because of the staggering dollar amount and because he is brilliant and charismatic. …The most important thing Richard Branson has done is to remind us that yes, we need government changes. Yes, we need rule changes,” said President Clinton in his closing address last week at the CGI. “But for those of us who aren’t in and can’t make those changes, except to vote for different policies when we get the chance in our respective countries, there is today a staggering set of economic opportunities that will yield good return on investment, to reduce the threat of global warming, create new jobs, start new businesses, promote greater equality, as well as a sustainable environment,” continued President Clinton. “That is the real lesson of the Branson commitment, and therefore, all of us can participate in that, going forward.” In addition to Branson’s $3 billion, more than $325 million in future renewable energy projects and investments was pledged by organizations and company’s at the 2006 CGI, including: — Solar Electric Light Fund, a non-profit organization, committed $500,000 to install affordable and sustainable solar water pumping and small-scale irrigation systems by summer 2007 for two pilot villages in Kalale, Africa. — The Enel Group, an Italian-based producer of geothermal energy, committed $4 million over the next two years to identifying suitable investment projects in renewables in developing countries. — Parsons & Whittemore Enterprises pledged $15 million over the next two years to construct a 40 million gallon per year biodiesel plant in the southeast U.S. that will blend refined soybean oil with diesel fuel. — ABN AMRO Bank pledged $190 million to establish a global private equity fund to promote investments in renewable energy and energy efficiency. — Standard Solar Inc. committed to raising $5.5 million in additional capital to enable 5,000 American families to purchase residential grid-tied solar electric systems, which Standard Solar will install and service. — Kleiner Perkins Caufield & Byers pledged $100 million over the next three years in a three-part commitment to increase support for renewable energy and low carbon technologies; recognize and reward outstanding green policy innovators; and combat global infectious disease. The annual three-day event, established by President Clinton, was attended by hundreds of world leaders, politicians, CEOs, current and former heads of state, religious leaders, philanthropists and foundation heads, including Former South African President Nelson Mandela, Microsoft founder Bill Gates, First Lady Laura Bush, Sun Microsystems founder and ethanol advocate Vinod Khosla, and many others.