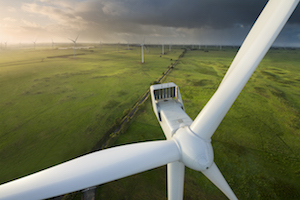 Tesla Inc. has partnered with Vestas Wind Systems A/S to figure out how to combine wind turbines and batteries, socking away power during breezy times to use when the air is still.

This partnership is part of a wider global program run by Vestas, the world’s biggest wind-turbine maker. It’s seeking to add energy storage to its wind farms and is working with a number of other battery makers on about 10 projects in total.

Vestas announced its new focus on storage at its latest annual general meeting in April, and the partnership with Tesla was first reported by Denmark’s Borsen newspaper. Chairman Bert Nordberg has said Vestas is seeking a new competitive edge amid consolidation in the industry and after it surpassed General Electric Co. last year to take the biggest market share in the U.S.

“Across a number of projects, Vestas is working with different energy storage technologies with specialised companies, including Tesla, to explore and test how wind turbines and energy storage can work together in sustainable energy solutions that can lower the cost of energy,” Vestas said in a statement on Friday.

The broader program started in 2012 with a project in Lem-Kaer, Denmark, with a test project to combine wind turbines and batteries. Vestas said it plans to commission additional projects worldwide.

Tesla has recently begun to seek new applications for its batteries beyond its electric cars and Powerwall battery units. Chief Executive Officer Elon Musk signed a deal with the South Australian government in July to built a giant energy storage facility to help balance the grid.