More
Home Baseload Bioenergy VC Investment in Green Tech Up to US $1.2B in Q2

Massachusetts, United States [RenewableEnergyWorld.com] Greentech Media Inc. this week released quarterly data showing that venture capital investment in green technologies totaled US $1.2 billion in 85 deals in the second quarter of 2009. This is up from $836 million in 59 deals in the first quarter of 2009.

“The recent quarter’s balanced distribution of sectors that attracted capital underscores cleantech’s breadth and diversity of opportunity, one of the key drivers behind why cleantech remains an enduring area,” said Ira Ehrenpreis, General Partner at cleantech VC, Technology Partners.

Solar power was once again the leading investment segment at more than $330 million. Unlike previous quarters – the second quarter saw a much more balanced distribution across the various sectors with a marked increase in automotive (more than $202 million) and energy storage (more than $180 million). 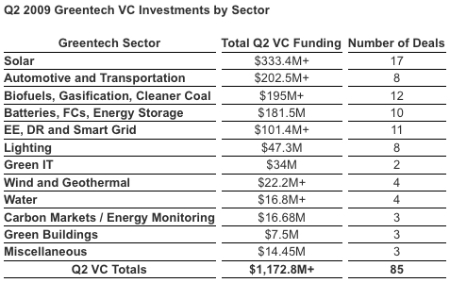 One of the drivers for steady second quarter venture investment was the promise of stimulus monies offering startup investors a non-dilutive funding source. Meanwhile, early-stage and late-stage investments dominated, while mid-stage funding was harder to come by, and the average round sizes were slightly smaller. There were no giant $100 million+ solar or biofuel rounds as in 2008. For a full breakdown, see the image above.