My Ten Clean Energy Stocks for 2015 model portfolio held on to first quarter gains in April, despite a 29 percent fall for one of the stocks. (For details on that decline, see the Power REIT (NYSE:PW) section below.)

The portfolio as a whole was rescued by the recovering Canadian Dollar and Euro, as well as mild advances for most of the other stocks across the board.  That includes a 4.9 percent gain for TransAlta Renewables (TSX:RNW, OTC:TRSWF), and a 5.8 percent gain for FutureFuel (NYSE:FF) which I singled out as having “fallen too far” in last month’s update.

As a whole, the model portfolio fell 0.7 percent in April and is up 4.9 percent for the year to April 30th.  This compares to a 2.6 percent April decline for its broad market benchmark, IWM, which is down 3.7 percent year to date (YTD).

However, the overall averages are a product of the excellent performance of the six income stocks masking the miserable performance of the four value and growth stocks.  The income group was up 4.2 percent for April, and is up 14.6 percent YTD.  This compares to a 1.9 percent monthly gain and 3.7 percent year to date loss for its benchmark, JXI.  The fossil fuel free income portfolio I manage with Green Alpha Advisors, GAGEIP, is also doing well, with a 3.1 percent gain in April, and a YTD 8.6 percent gain.

The chart below (click for larger version) gives details of individual stock performance, followed by a discussion of April news for each stock. 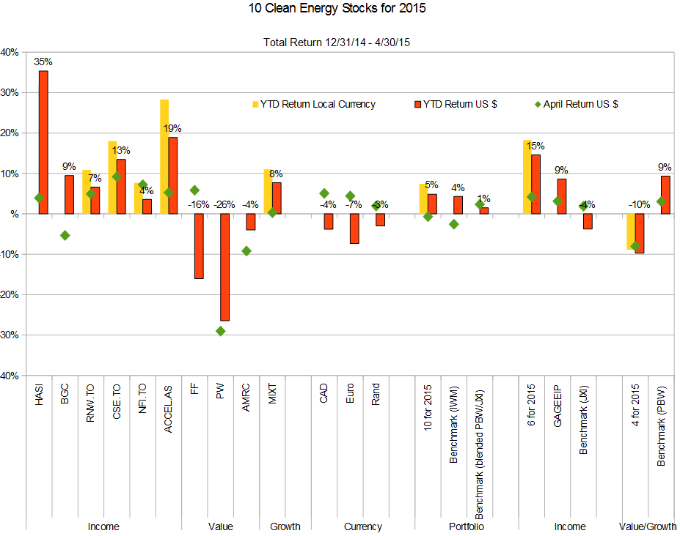 The low and high targets given below are my estimates of the range within which I expected each stock to finish 2015 when I compiled the list at the end of 2014.

The stock of sustainable infrastructure financier and Real Estate Investment Trust Hannon Armstrong added to previous gains in April, despite a secondary share offering of 4 million shares priced at $18.50 a share.  The strength is most likely due to a well timed earnings guidance update for the first quarter released on April 28th.

International manufacturer of electrical and fiber optic cable General Cable Corp. gave back some of its previous gains.  The gains come because of buyout rumors, discussed in the last update.  Although the reasons for a possible buyout are just as good as they were in March, this is typical performance for a stock after buyout rumors: The stock declines slowly as traders lose interest and move on to the next item in the news cycle.  The company will discuss first quarter earnings with analysts on May 7th.  Management is sure to be asked about the rumors at that time, although I doubt they will say anything to feed renewed speculative frenzy.

I highlighted Canadian yieldco TransAlta Renewables as a good short-term buy last month because of what I believe to be a temporary sell-off following the announcement of a secondary offering of stock priced at C$12.65.  The stock initially advanced, but then fell back when the deal closed.  After its normal monthly C$0.06416 dividend, the stock was flat in local currency terms, but up 4.9 percent in US$ terms because of the appreciating Canadian dollar.

If anything, now is an even better time to buy TransAlta Renewables given that it has not advanced in local currency terms, and it will soon increase its monthly dividend to C$0.07.  Analysts seem to agree: TD Securities upgraded the stock from “hold” to “buy” and raised its price target from C$13.50 to C$15.50. Macquarie maintained a neutral rating, but increased its price target from C$13 to C$14.

Canadian power producer and developer (yieldco) Capstone Infrastructure revealed that Ontario Electricity Financial Corporation had appealed the March 12th decision from the Ontario Superior Court discussed in the last update.  If the ruling is upheld, it will result in a C$25 million (C$0.26) retroactive payment and an ongoing revenue increase at two of Capstones hydropower facilities.  The stock continued to recover from previous lows.

Bicycle manufacturer Accell Group reported record revenue and profits for 2014, on strong electric and sport bike sales and favorable weather in Europe this past winter.  The company also reported that 2015 had gotten off to a favorable start, despite the volatility of the Euro.  Shareholders approved a €0.61 dividend, up from €0.55 last year.  The stock went ex-dividend on April 27th.

Last month, I highlighted specialty chemicals and biodiesel producer FutureFuel as one of two short term buys based on undervaluation.  Like TransAlta Renewables, FutureFuel’s return was not particularly impressive, but it did advance 5.8 percent.  The advance was helped by the EPA’s agreement to finalize volumes for 2014 and 2015 under the Renewable Fuel Standard by November 30th.  The Agency also intends to finalize the rule for 2016 before the end of the year.  Uncertainty over the repeated delays of the EPAs rule making have been undermining the biofuels markets and FutureFuel’s profits since the EPA missed its deadline for the 2014 rules in November 2013.

As mentioned above, the judge ruled against Power REIT in summary judgement on April 24th.  I wrote about the ruling and my new valuation for Power REIT ($5 to $7) here.  The judge also called a status conference with both parties for April 29th.  My hope is that Power REIT decided not to appeal and its lessees dropped the remaining minor claims, but the company has not yet released any information regarding the outcome of the conference.

Although the judge ruled against Power REIT on every count, there were two bright spots in the ruling.  First, the company can now drop the case without the expense of a prolonged trial. It was due to this savings in legal expenses that my current valuation exceeds my previously estimate ($5) of Power REIT’s value in the case of a total loss.

The other upside comes from Power REIT’s preferred stock (PW-PA,) which I have previously described as a hedge against the possibility of a loss in the civil case.  Although the preferred sold off briefly in the wake of its ruling, calmer heads soon prevailed. Prior to the ruling, the preferred had been trading in the $25.50 to $26 range, but it is now trading around $27.  The increase is due to the fact that the preferred dividends (like dividends on the common) should now be treated for tax purposes as return of capital, rather than as ordinary income.

Energy service contractor Ameresco continues to announce both solar and energy efficiency contracts, but has yet to catch investor attention.  The stock drifted down after some excitement last month over the Obama administration’s renewed push for energy efficiency in Federal agencies.

Vehicle and fleet management software-as-a-service provider MiX Telematics was mostly flat with a slight decline in South African rand terms offset by appreciation of the rand against the dollar.  I find the lack of movement puzzling, given the likelihood that the company is currently negotiating a sale.  Readers can find an excellent in-depth look at MiX’s current undervaluation and prospects for a buy-out here.

With my growing focus on income stocks and the launch of the Green Alpha Global Equity Income Portfolio strategy late last year, I had seriously considered placing only income stocks on this list for 2015.  Unfortunately, a colleague talked me out of the idea, saying that readers expect a broader focus for my lists of “Ten Clean Energy Stocks,” which I have been publishing since 2007.

It’s hard to be good at all things, but it is possible to know your strengths.  I’m tired of getting caught in value traps.  I’m re-considering making the tenth annual “10 Clean Energy Stocks” list into “10 Clean Energy Income Stocks for 2016.”

On the subject of a much more recent tradition, I’ve managed to pick two or three winners from this list for the coming month for two months running.  For May, I’m going to stick with TransAlta Renewables and bring MiX Telematics back from March, for the reasons discussed above.