New Hampshire — Utility-scale solar installations will surge for a fifth consecutive year in 2014, according to provisional figures released this week by Wiki-Solar.org, which defined utility-scale as projects greater than 4 MW in capacity. New global total installed capacity for the year already exceeds 10 GW, and is expected to climb further, when the official figures are available in March.

For the first time, Africa and South America show significant new capacity to join the traditional lead continents of North America, Asia and Europe. Only Oceania is refusing to join the solar era, dogged in particular by policy reversals in Australia.

Africa’s contribution is led by South Africa, whose largest project — the 74 MW plant at Sishen — was commissioned in December. Meanwhile Chile is leading the charge in South America, with 13 new plants connected so far this year.

A good year for Japan, combined with continuing growth in China and India, should enable Asia to rival and possibly beat North America as top continent. However the leading country is again expected to be the U.S., where the world’s largest project — the 550 MW Topaz plant in California — was completed in November. Europe reversed a 2-year decline thanks largely to another bumper year in the UK, supported by steady growth in France.

Wiki-Solar’s Philip Wolfe anticipates another record year in 2015, with “continuing progress in the powerhouses of U.S., China and India; and support in particular from Chile, Japan and South Africa”.

“There will be pressure in the States to complete projects in the pipeline, because the future for tax incentives becomes uncertain from 2016,” he said. “Europe’s best market in the short term will remain the UK, which has now topped 2 GW and is likely to leapfrog India to the world’s #4 market by the end of March. This position may prove temporary, because large-scale solar becomes ineligible for the UK’s Renewables Obligation from 1st April. Perhaps France, which has recently started Europe’s largest plant at Cestas will then take up the running.”

“I’m expecting South America to overtake Africa over the next year or two”, says Wolfe, “especially as Brazil starts to build the projects which were successful in its recent auction, to add to a huge project pipeline in Chile.” 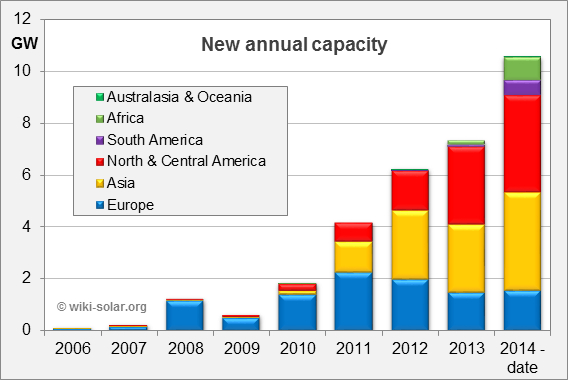