California, USA — An interview with SolarReserve CEO Kevin Smith may put to rest some of the more common misconceptions held about how renewable energy actually works in practice at utility scale.

Though SolarReserve is developing some photovoltaic (PV) projects, it is better known for its concentrating solar (CSP) power tower technology that includes molten salt thermal energy storage, which can be used to run turbines to produce electricity at any time. It has a 25-year contract with Nevada Energy for solar energy plus storage from their 110-MW Crescent Dunes project in Tonopah, Nevada, due online in 2014. 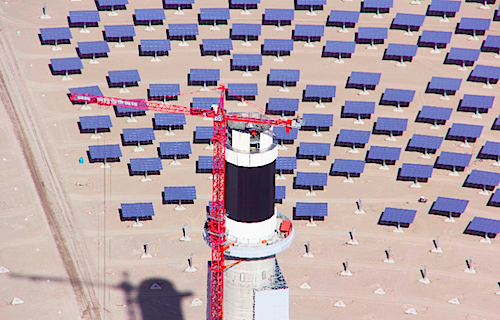 What do utilities buy energy based on: the capacity of the solar project, or just the power actually produced?

They pay us for each megawatt-hour that’s shipped, at a pre-agreed price.

What happens if your solar output is less than you predicted?

In most PPAs you have minimum delivery requirements, and if you don’t meet that minimum; then you would have a penalty that you owe. That is based on what the utility would need to do to replace that energy, so if you’re supposed to sell them energy at X, and then they have to buy it at X plus ten percent, then you potentially are responsible for that.

What if you deliver more energy than you expected?

In our contract — and in most contracts — there’s an expected delivery, a minimum and a maximum. They don’t want you delivering any more energy either, because then they might have to shut off other generation.

If you’re below the minimum, then you’re responsible for penalties. If you’re above the maximum, you might get only partial payment for those kilowatts, or they may say don’t deliver them. So you would just shut down your turbines.

In reality most power contracts — because they really want the kilowatt-hours — it’s just a question of price. So typically, in the power purchase agreements, if you generate more than the maximum allowed in your contract then you might get only 30 or 50 percent payment for those additional electrons.

For the most part, projects know the range of output that they are going to be in, so typically that range is right where you expect you’re going to be.

Do only renewables have a different gross than net production?

No, all power projects, including traditional plants, have what they call parasitic load, the load that you consume internally, for lighting, startup motors for turbines, or whatever.

Because of the storage, we can generate power after dark, as opposed to big PV projects that have no storage, but with PV, if you are consuming electricity after dark you’re buying it from the grid, and then when you start generating, then a certain percentage of your power; to run the trackers that move the mirrors to follow the sun in our CSP, for example, would be consumed internally.

How is capacity different from capacity factor in renewables?

Kilowatt-hour delivery is over a time period, whereas capacity is what is needed to meet an instantaneous requirement. Capacity factor is similarly the number of kilowatt-hours you deliver over the total hours in the year at whatever level you are delivering at.

Wind and solar projects typically operate in the 25-40 percent capacity factor, which means on average they are only generating 30-40 percent of expected output.

Why does capacity factor matter?

Utilities look for two things. They look for actual kilowatt-hours that they need to sell, because we buy kilowatt-hours in our homes, but the utility also needs to know what reliable deliverable energy they can get, so at any one time they say ‘we need 4,000 megawatts of projects operating in order to meet the load of our customers.’

The difficulty is that they might be getting the kilowatt-hours that they want on an annual basis, or on a monthly or weekly basis, but if it turns out that they are getting it all in the day and they don’t have enough at night, they don’t have reliable capacity to meet their load 24 hours a day.

They need 4,000 megawatts at any one minute. So capacity is kind of an instantaneous measurement, how much draws on the grid, how many megawatts do they need to meet their load. They might get the kilowatt-hours but it might be when they don’t need it.

What does CSP with storage solve?

If you don’t have storage, it’s pretty much you take the power when it’s available from the facility, so if the wind is blowing at 3:00 a.m. then the utility has to take it at 3:00 a.m., whether they need it or not. Wind blows hardest at night, and in winter. But peak is during the day or evening, and in summer, so they are almost completely out of alignment with the demand requirements of the utility.

Most PPAs written for solar and wind are just in kilowatts and the utility has to take them when they are available, and manage the rest of the system around that, ramp down their coal plants or natural gas or nuclear plants on the basis of how much renewable energy is available. But with storage the utility can depend on the requirement.

Our CSP facility is designed so that we generate when the utility wants us to operate, and it’s always at 100 percent output. Say there’s a heatwave and everybody turns on their A/C. The utility needs those megawatts on an instantaneous basis.

The APC contract with Abengoa’s Solana project, that also includes storage, is flexible on a daily basis, delivering the next day before sunrise on request for example. Under your Crescent Dunes PPA with Nevada Energy can you deliver on a day’s notice like that?

Yes. We tell the utility, ‘you tell us when you want it.’ Our contract is for noon to midnight, but in reality, the utility can call the day before and say; we’re going to shut down one of our gas facilities in the morning. Can you start up at 8:00 a.m. instead of at noon, and run till 8:00 p.m. instead of at midnight.

You can do all that if you have storage.