A legacy of the 19th century, utility demand charges have traditionally been paid by commercial and industrial utility customers. Demand charges were originally intended to account for utility investments in enough capacity to supply peak electric loads, whenever their customers needed them.

Now, increasing penetration of distributed, renewable energy is causing an upheaval in traditional utility business models and spurring a re-examination of tariff structures that have been in place for over 100 years.

The problem for utilities is that a flat trajectory in U.S. electricity consumption, along with a loss of energy sales from renewables, is causing their revenues to shrink. At the same time, the increase in distributed solar is causing new technical challenges for utilities, creating sharp new demand spikes when the sun goes down. In California, this is the reason for the duck curve.

Utilities, regulatory authorities and their stakeholders are seeking innovative ways to manage — and encourage — increasing amounts of distributed energy while keeping utilities financially afloat. New proposals include time-varying utility rates, increased demand charges, demand charges for more customer classes, or a combination of all these policies. In general, the focus on utility revenue sources is shifting away from energy sales and toward charges for the use of fixed assets such as the electric grid.

That means that utility customers — particularly in commercial and industrial rate classes — are going to face new challenges in managing their demand spikes and avoiding the expensive charges that accompany them. Fortunately, renewables, and increasingly more affordable energy storage, provide powerful solutions. They offer users the flexibility to shave peak demands and time-shift consumption away from peak periods.

Lowering the Soft Costs of the Solar Plus Storage Design Process

HOMER Energy has recently released a new tool, HOMER Grid, for designing grid-tied, behind-the-meter distributed generation systems. The software simplifies the complex process of optimizing combinations of solar, batteries, wind, generators and combined heat and power (CHP) and makes it easier to calculate demand-charge reductions. It includes actual demand charges that are derived from the Genability tariff database, which provides utility rates from the U.S., Canada, and Mexico. The software runs simulations for dozens of different system configurations for an entire year and ranks them by economic performance. Finally, it provides users with detailed reports on capital and operating costs, along with savings on energy and demand charges. 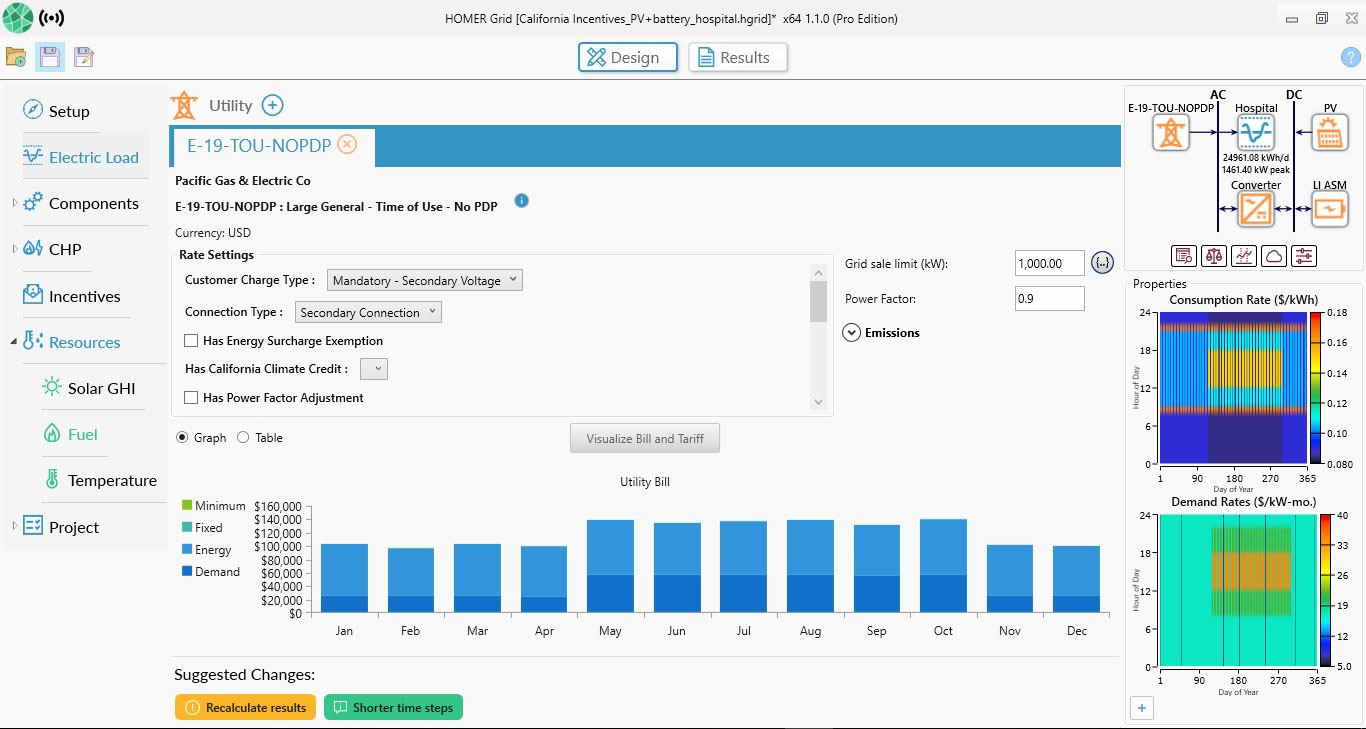 “Demand charges now make up about 25 percent of overall utility sales to commercial and industrial customers nationally, and for individual companies, they can represent over 50 percent of an electricity bill,” said Peter Lilienthal, HOMER Energy founder and Chief Executive Officer.

“We continually hear from clients who say they don’t understand what they can do to reduce demand charges.”

The software evolved out of HOMER Pro software, which was developed at the National Renewable Energy Laboratory (NREL) in the early 1990’s.

“The ability of HOMER Grid to determine the potential for reducing demand charges is a non-trivial analytical challenge,” says Lilienthal.

“That’s because determining demand charges depends on specific load data as well as the need for chronological modeling of storage management.”

This goes far beyond the ability of spreadsheet models, which many people try to use. HOMER Grid calculates when it’s best to use solar PV energy directly and when to use it to charge batteries, relying on its chronological simulation and dispatch algorithms; it also assesses multiple tradeoffs in how solar-plus-storage systems should be sized.

HOMER Grid is integrated with PVsyst photovoltaic design software and HelioScope from Folsom Labs, which makes it easier for developers to import PV designs or existing project specifications directly into the software and model the implications of adding storage. Folsom Labs Co-founder Paul Grana said that having the tool integrated “is huge,” adding that putting design tools in more people’s hands on solar design teams “is creating greater efficiencies and faster customer response.”

Determining which type of facility will be best-served by a combination of solar and storage is exactly the type of question that the software likes to answer, because every customer profile is unique, involving a specific load profile, tariff scheme and financial objective. But in general, customers whose peak loads tend to be large and variable are more apt to save on demand charges after investing in storage.

Buildings with a pronounced spike in their load profile, such as many schools, hotels and apartments, tend to benefit most from solar-plus-storage because they have a short, late afternoon peak. In contrast, the business case for facilities with a steadier 24-hour load profile, such as hospitals and data centers, relies more on the resiliency benefits of distributed energy.

Solar developer Ideal Energy, an Iowa-based builder of complex distributed energy systems for commercial and industrial customers, is one of the companies working with HOMER Grid to analyze the financial feasibility of solar-plus-storage projects for its clients.

“Companies that come to us are looking for demand mitigation strategies that will reduce their overall electric bills,” said Ideal Energy CEO Troy Van Beek. “They also want the green branding that solar provides. Finally, lot of companies we work with need to comply with stricter supply chain rules that mandate sustainability.”

Van Beek explained that while Iowa has low energy costs overall, partly due to its spectacular wind resource, it has very high demand charges, as well as over 200 different utilities with a wide variety of tariffs to track. However, many potential battery customers aren’t aware of possible savings, said Van Beek, or the fact that storage costs have declined so dramatically. In fact, according to Ideal Energy, NREL has estimated that 23,000 Iowa companies could potentially benefit from battery investments.

In many states, particularly those with high penetrations of renewable energy, utilities are proposing demand charges for more classes of customers.

That’s the case with the Salt River Project (SRP) in Arizona, where Diane Dandeneau, of SolarIQ, has been selling automated demand controls.

“SRP has very high residential demand charges, so solar by itself does not provide enough savings.  Solar companies are selling demand management controls with and without batteries to help make solar financially viable for their customers,” she said, adding that the company plans to use the HOMER Grid software “to model and compare the performance of solar, our load controls and different battery solutions to identify the best configurations.”

As states respond to the increased penetration of distributed energy with new tariff schemes, it will become more and more crucial to calculate the financial impact of these policies in distributed energy systems. HOMER Grid is intended to be the tool that can incorporate such variables, and by helping make complex choices, facilitate the job of designing these systems.

Lili Francklyn, Editor of Microgrid News at HOMER Energy, writes about renewable energy and climate issues as a journalist and marketer. She believes photovoltaic cells are magic.