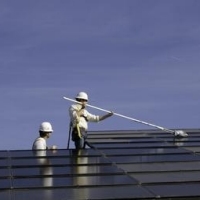 On a call to discuss the results, Freeman Ford, founder of FAFCO said that while the U.S. solar thermal is seeing much larger growth than in recent years, the market lags behind the rest of the world. He said that while the market was valued at US $30 million last year, he expects the market to grow at 50% per year every year for the foreseeable future, led in large part by California, which could support a $1 billion market on its own.

Marc Ulrich, vice president of Renewable & Alternative Power at Southern California Edison (SCE) said that his utility alone purchased 13.6 billion kilowatt-hours from renewables in 2009, or close to 17% of its overall mix. Of that, only 6% was solar, but solar is also the fastest growing segment is growing most quickly. He said that SCE plans to add more than 1 gigawatt (GW) of solar to its mix in the next five years.

Industry growth resulted in a 36 percent increase in overall revenue, totaling nearly $4 billion. The solar industry added 17,000 new jobs from coast to coast and today employs 46,000 total U.S. workers and supports another 33,000 jobs in other sectors.

Jonathan Bass, director of communications at SolarCity said the company added 285 new employees in last 12 months, half of which were installer positions, he also said SolarCity expects to add 150 more jobs later this year to bring the company’s payroll to 800 in total. Also on the jobs front, VP of Sharp’s solar energy solutions group Ron Kenedi said that 160 jobs were added in its manufacturing plant in Memphis, Tennessee, which now boasts 480 union jobs. That plant runs 24 hours a day and has a yearly capacity of 140 MW.

“The story behind the increase in factory growth is the demand for solar products in the United States,” Kenedi said. “For every new job in our factory many more are being created in the field including designers and installers.”

Julie Blunden, VP of public policy and corporate communications at SunPower said that the California Public Utilities Commission has just released figures showing that last month saw more the 50 MW of applications to the California Solar Initiative, the highest on record. She also said that SunPower has experienced the massive growth in the solar market first hand, going from $11 million in revenue in 2004 to $1.5 billion in 2009.

Solar manufacturing showed a 7 percent increase in PV module production from 2008. SEIA’s president and CEO Rhone Resch said that while one of the bright spots in 2009 was manufacturing, only 7% of worldwide manufacturing is in U.S. and Resch called on Congress to extend the manufacturing tax credit that was passed in the stimulus package in 2009 and to make solar a bigger part of the U.S. energy mix through the energy bill that is expected to come to the floor this summer.

Bryan Ashley, chief marketing officer at Suniva said that federal support has helped to create jobs and bring in huge amounts of revenue for the Georgia-based solar cell manufacturer. He said that Suniva expanded from 32-MW of production capacity to 100 MW at end of 2009, which added 80 new jobs, using the Advanced Manufacturing Tax Credit Resch talked about. Ashley also said that the company is currently expanding by another 70 MW, which will bring its facility to 175 MW of capacity by mid-year, and will add 25 more jobs.

Resch and everyone else on the call was also excited about the prospects for 2010 as the total utility-scale pipeline (across all solar technologies) reached 17 gigawatts by the end of 2009. Much of that capacity is expected to come online this year which would lead to a record year for U.S. solar growth.