New Hampshire, USA — Solar photovoltaic (PV) installations in the U.S. topped 4.78 GW in 2013, an increase of 41 percent over 2012, according to the annual market review and outlook published today by the Solar Energy Industries Association (SEIA) and GTM Research. The industry won’t quite maintain that torrid pace in 2014, but watch for progress on a number of important fronts, from long-anticipated investment innovation to a rebound in the midsize project sector to addressing changes to federal investment tax credits.

More than 2.1 GW of that 4.7 GW was added in the final three months of the year, which is by a long shot the sector’s largest quarterly tally. Concentrating solar PV (CSP) also had a big year, bringing 410 MW of capacity online and like PV a big chunk of that was added late in the year. Approximately 140,000 individual solar installations were put up during the year, making solar energy the nation’s second-largest source of new generation (29 percent) behind only natural gas.

“We’re putting real megawatts in the ground, making real contributions to electricity generation, and contributing to a real economic result,” said Arno Harris, SEIA board president and CEO of Recurrent Energy, in a conference call discussing the report results.

Cumulative solar PV installations in the U.S. are now 12.1 GW, plus another 918 MW of concentrating solar (CSP). Put another way, U.S. solar PV added roughly 40 percent to its cumulative capacity during 2013, while CSP hiked its cumulative capacity by 80 percent. Total individual solar installations now exceed 440,000. The solar PV market’s size also grew substantially, from $11.5 billion in 2012 to $13.7 billion in 2013.

What’s equally or perhaps even more important than the record 2013 numbers was the broad support and adoption of U.S. solar energy, illustrated by strong customer adoption and grassroots support, increasingly favorable financing terms, and success stories in the public markets. Quite simply, it was “the first real glimpse of [U.S. solar’s] path toward mainstream status,” suggested Shayle Kann, SVP at GTM Research, in the report.

States On the Move

Five states represented 81 percent of all U.S. PV installations in 2013: California, Arizona, North Carolina, Massachusetts, and New Jersey. Ten states saw more than three-quarters of new electric capacity come from solar — and for six of them (plus Washington D.C.) it was the *only* new generation.

No surprise that California is leading the way, with over 2.6 GW of installations representing more than half of the nation’s solar capacity in 2013 — and more than the entire nation installed in 2011. Arizona came in a distant second at 421 MW, which is a far cry from the 710 MW it installed in 2012. Other high growth solar states in 2013 included North Carolina, Massachusetts, and Georgia, collectively more than doubling their 2012 totals with 663 MW installed.

Highlighting individual states, Resch pointed to North Carolina which soared to the No. 3 spot, more than doubling its installed PV capacity to 35 MW, mostly because of commercial-scale additions, both small (e.g. 20 MW at Apple’s Maiden data center.) Massachusetts, meanwhile, rose 76 percent to 237 MW and is now the nation’s top commercial-scale solar PV installer, thanks largely to stabilizing policies including continued SREC programs. Resch also called out energy-hungry Texas, which traditionally has had a bigger appetite for wind than solar despite excellent resources for both. “It’s going to be a very strong market for solar going forward,” mainly for utility-scale projects and because of easier connections to existing transmission lines, he said.

Breaking Down the Markets

Residential solar grew 60 percent in 2013 to 792 MW of installed capacity, reflecting numerous policy victories most notably net metering in Arizona and California. It was a continued evolution in residential solar installation strategies, from new emerging partnerships to home service providers (including cable companies) entering the mix. Reiterating the year-end boom for all of U.S. solar installations, the 33 percent spike in residential solar during 4Q was by far the largest month/month increase in several years, primarily attributed to California.

Non-residential solar (commercial, government, schools, nonprofits) ended up basically flat in 2013, up just 4 percent for the year to 1.11 GW, but only because of a massive 78 percent spike in the fourth quarter, as three nonresidential-heavy states shrank (Arizona, California New Jersey). 2013 was “a massive year” for utility-scale solar, which added 2.8 GW of installed capacity, nearly half of that in the final quarter of the year, reflecting the volume of large projects that have progressed for years through the development pipeline. [Article continues on next page.]

More good news: PV system costs continue to come down. Capacity-weighted average system prices fell another 15 percent to a low of $2.59/Watt by year’s end — that’s a 37 percent reduction in just two years. The specific breakdown of system pricing was influenced by the large amount of utility-scale solar that came online. Broken out by market, residential solar system prices fell about 9 percent to $4.59/W, nonresidential prices dropped about 16 percent to $3.57/W but within that were some $3/W average installed prices in ground-mount systems and even some below $2/W. Utility prices dropped even further, down 14 percent to $1.96/W. (Lowest installed cost/W does not necessarily translate to lowest levelized cost of energy, they point out.) 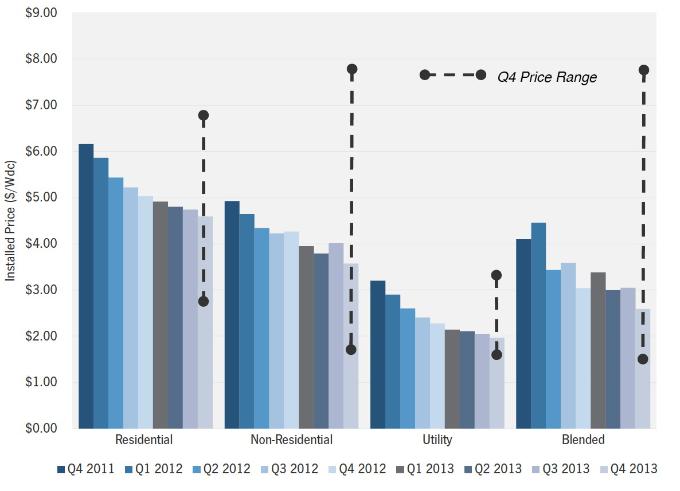 And “there’s a lot of room” for costs to decline in 2014, Kann said: “I see no reason to see the pace of cost reductions to decrease.” Module prices actually increased over the past year for the first time in memory, which means system cost reductions are being achieved elsewhere, such as racking and inverters and overall improved process efficiencies. The DoE’s $1/W Sunshot targets remain “aggressive” but are “not unrealistic,” he said, and will increasingly target soft costs.

The caveat with that is what happens with any potential trade sanctions between the U.S. and China/Taiwan, with decisions likely to come down between early spring and summertime. Resch suggested a determination in favor of the U.S. might result in a 10-15 percent countervailing duty, which would effectively tack on 7-10 cents/W; a similarly U.S.-favorable ruling for antidumping might mean 50-75 percent tacked onto Chinese module makers. Kann acknowledged that the impact would be “more than the last time around.” Harris, though, didn’t think this would strongly catalyze any domestic solar manufacturing efforts, suggesting that both domestic and global suppliers with competitive cost structures can play a role in this market.

Following the record 2013, SEIA/GTM project a slight pullback in PV installations in 2014, but still very robust: 26 percent increase to nearly 6 GW, with growth especially in the residential segment. Kann pegged 2014 as the year of rebound for commercial solar installations, largely driven by states that have become hotbeds for this particular market segment (Massachusetts, North Carolina, and California), plus a “rebirth” of the New Jersey market and expansion in newer markets such as New York and Georgia.

Utility-scale solar will remain the largest segment but 2014 will be a bit of a letdown with growth pegged at only 15 percent, according to Kann, as projects continue to exit the pipeline and its replenishment slows down. Part of that is due to states approaching the end of certain policies and regulatory mandates (e.g., renewable portfolio standards), though Kann suggested utilities will still pursue these bigger-size projects even above and beyond regulatory requirements in some states. Harris also suggested that typical power markets go through procurements in waves, and medium-sized utility projects (1-50 MW) are a lot easier and faster to plan and get approved. If 2013 was the year that the utility-scale pipeline issues came to the forefront, 2014 will be the year for “finding solutions” to them, Harris said.

Another possible reason for the shrinking utility-scale development pipeline is an issue that affects the entire U.S. solar industry: the growing shadow of 2016 and expiration of investment tax credits (ITC). Harris reiterated that the 2016 ITC expiration and potential impact is still a top priority, and step one is to change the language to the same “under construction” language that the wind ITC received, and possibly also tack on a couple of years to extend the runway for cost reductions. Resch noted there is now bipartisan support for bills in both the Senate and the House, and he believes a draft will be introduced before the Easter recess containing at least the continuing-construction change.

Also in 2014, look for an “increasingly complex nexus of utilities and distributed generation solar,” Kann suggested. Utilities are keen to figure out their role delivering electricity to customers; that means more discussions over net metering and rate design, but also about the structures of utilities themselves, whether and how they can invest in DG solar through their regulated and unregulated arms, he said. He also sees expansion of solar beyond state-level incentives (rebates, tax credits, or solar renewable energy certificates. California’s already maxed out its solar initiative yet it continues to grow rapidly; look for other states to pursue significant volumes of solar energy without state incentives.

Kann also emphasized another widely anticipated trend for 2014: the continued emergence of financial innovations to both access more capital investments and lower the cost of capital. These began to emerge last year, from SolarCity’s inaugural securitization of distributed-generation solar energy assets, to several yieldco spinoffs with varying levels of renewable energy assets in their portfolios (NRG, Pattern, Transalta, Hannon Armstrong) seeking to unlock more value within their energy assets. We’ve already seen several more examples in these first few weeks of 2014: rumors of up to half a dozen other securitization deals in the works (some frequent names of speculation include Vivint, Sunrun, Sungevity, and several others), while on the yieldco front SunEdison and now Abengoa have announced their own “yieldco” IPOs, while SunPower is mulling a yieldco in a 2015 timeframe. Others reportedly eyeing the yieldco model include Canadian Solar, Jinko Solar, and First Solar.

Asked during the Q&A about examples where high penetration of solar is causing grid pain and confusion, Harris acknowledged that this is “becoming one of the major issues the industry has to deal with. SEIA is forming a working group to come up with recommendations to policymakers and regulators to help understand what improvements to the grid are needed to accommodate more renewable energy. “A lot of different people are saying different things,” he said, but among them are groups like NREL, which is showing that in fact a lot more solar can be put on the grid, as long as there also are pieces that enable greater operating flexibility, such as regional transmission lines and energy storage both in front and behind the meter. Resch added that the SEIA also is absorbing what similar groups have done in Europe and island countries, including the DoE which has a grid integration group that’s worked closely with Europe.