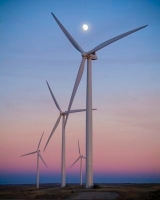 Washington, DC, United States [RenewableEnergyWorld.com] Last month, the U.S. Department of Energy (DOE) made yet another round of funding announcements for renewable energy projects and initiatives again showing its ongoing commitment to the greening of the American economy. The following announcements were reported in the EERE Network News.

DOE offered $52.5 million for research, development and demonstration of concentrating solar power (CSP) systems that provide low-cost electrical power both day and night. The new funding will seek to improve energy storage technology and develop novel system designs that will extend operations to a level of production that would make it possible for a CSP plant to displace a traditional coal power plant.

The competitive funding opportunity for up to 13 awards focuses on developing a CSP system capable of operating at least 18 hours per day. It involves two areas: Research and development of concepts and components for such a CSP system; and development of a complete CSP system that can operate into the night, including an evaluation of the system and testing of the components for a future prototype. Applications are due by October 15. S

DOE selected 28 new wind energy projects to receive up to $13.8 million in funding, tapping $12.8 million in American Recovery and Reinvestment Act (ARRA) funds. The projects will help address market and deployment challenges, including wind turbine research and testing and efforts to better integrate wind power into the nation’s electrical grid.

Applicants must provide matching funds and will ideally be ready to implement their projects with readily deployable renewable energy systems. Completed applications are due September 3, and DOE will select the projects by the end of November.

DOE awarded $47 million in ARRA funds to eight ongoing smart grid demonstration projects. The $47 million investment will add to the $17 million in funds DOE had awarded these eight projects in 2008, thereby accelerating the timelines for the projects. Most of the projects relate to technologies to help transmission and distribution systems operate better, but a few are directly related to clean energy.

$212 Million for Clean Energy in Ten States and Puerto Rico

The funds are part of the Obama Administration’s national strategy to support job growth while making a historic down payment on clean energy. The Recovery Act appropriated $3.1 billion to the State Energy Program, giving priority to achieving national goals of energy independence while helping to stimulate local economies. For the 10 states and Puerto Rico, the new funds represent a portion of the State Energy Program funds available to them under the Recovery Act, following an initial 10% of the funds that were awarded to support planning activities.

The remainder of the funds will be released when they meet the reporting, oversight and accountability milestones required by the Recovery Act.

DOE and the U.S. Department of Agriculture announced last month their joint selection of awards of up to $6.3 million over three years toward fundamental genomics research, which may lead to the improved use of plant feedstocks for biofuel production. DOE will provide $4 million for four projects, while USDA will award $2.3 million to three projects.

The projects will focus on developing enhanced versions of poplar trees, alfalfa, and grasses, including Miscanthus, switchgrass, Brachypodium distachyon (purple false brome), and sweet sorghum. Awardees are located in five states: California, Florida, Georgia, Michigan, and Nebraska. The grants will be awarded under a joint DOE-USDA program begun in 2006 that is committed to fundamental research in biomass genomics, providing the scientific foundation to facilitate use of lignocellulosic materials for bioenergy and biofuels.

Ernie Tucker is an NREL staff writer who has worked as a writer and editor in a variety of media, including newspapers, television and online content.