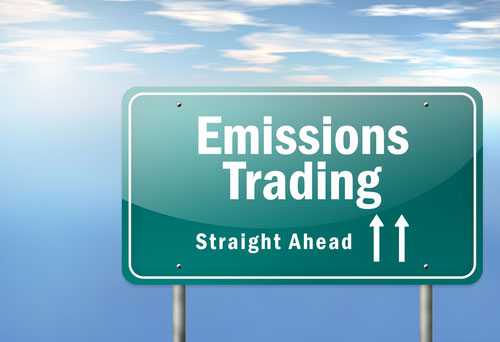 Some businesses that back President Barack Obama’s plan to curb greenhouse gases are making a late lobbying push to add an element similar to a cap-and-trade program.

With the administration set this week or next to unveil its final rules to cut emissions from coal and natural gas plants, groups for companies such as Johnson Controls Inc., Alstom SA and AES Corp. have pressed officials to include a carbon market so that costs don’t surge.

Those programs — a slimmed-down version of a plan Congress debated and failed to pass early in Obama’s tenure — would apply to states that balk at putting rules in place.

“It would reward states for what they are doing, whether they submit a plan or not,” said Bob Wyman, a lawyer for the National Climate Coalition, a group advocating to make the Environmental Protection Agency’s rule workable. “It sets a national carbon price that can unleash investment.”

The first U.S. rules on carbon emissions from power plants are among the most sweeping and complex in the EPA’s history, promising to revamp the way electricity has been generated and distributed for a century. They are the centerpiece of Obama’s fight to combat climate change, the issue he’s made a top priority of his final two years in the White House.

Wyman’s group, on behalf of Alstom, AES, Boeing Co. and other companies, and Advanced Energy Economy, which speaks for Johnson Controls and First Solar Inc., met separately with White House officials to pitch versions of trading programs as the best way to get cuts. The plans are part of a wide-scale advocacy campaign that is trying to shape the EPA’s carbon plan before it’s finalized.

The EPA’s standards for fossil-fuel power plants, the top source of the emissions blamed for global warming, has drawn fire from coal producers, manufacturers, state officials and Republicans, led by Senate Majority Leader Mitch McConnell of Kentucky. He has urged governors to refuse to submit plans to meet the goals set out by the EPA.

The agency now is grappling with specific criticisms of its proposal, which was released last year. The objections include how it tried to give a boost to existing nuclear plants, the amount of natural-gas generation it assumed will be available by 2020 and the wide discrepancies in cuts mandated from one state to another.

Rural electric cooperatives in Florida and Arizona also met with White House officials recently. They say the EPA’s rules could force them to shut coal plants after investing million of dollars to meet other federal pollution rules. Unlike large utilities such as Southern Co., they said they don’t have the ability to switch among many different plants.

Only two of Arizona’s coal plants are likely to survive if the EPA’s plans is unchanged from the proposal, according to the National Rural Electric Cooperative Association. Arizona would have to make the second-steepest cut in the country, at 52 percent, under the proposals.

“We don’t have the transmission resources to replace our coal fleet,” said Patrick Ledger, chief executive of Arizona Electric Generation and Transmission Cooperatives. “We tried to reach out to the administration in every way possible, but we don’t have any idea if they really listened to us.”

Ledger said that to avoid a mandate under a separate EPA regional haze rule, his cooperative agreed to curb pollution at one coal unit and switch another to run on natural gas. Now, under the EPA’s carbon rules, the coal unit may be forced to close — and default on a federal loan.

“I have $200 million in outstanding debt on this plant, and I can’t make it go away,” he said. Ledger said that when he met with EPA chief Gina McCarthy to press his case, she assured him the agency would address his state’s issue.

The agency also has vowed to address how to deal with states that don’t come up with adequate plans. McCarthy said the agency will release a federal implementation proposal at the same time it finalizes the power-plant rule.

Lawyers say that EPA cannot rework a state’s entire electricity system, and so must set standards plant by plant. The only way to do that, and not cause widespread problems for coal plants, is to allow trading, advocates say.

Unlike the economy-wide cap-and-trade system considered in Congress, these plans would only apply to the electricity sector and would likely entail a reduction in the emissions rate, not an absolute cap.

“If EPA takes this approach, there is no substantive or policy downside for power plants in states that do not develop their own plans,” said Arvin Ganesan, vice president for federal policy at Advanced Energy Economy in Washington. “In fact, it would result in cheaper compliance cost for utilities and end consumers.”