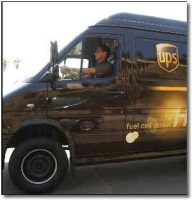 Only three of the delivery trucks are on the road now, but United Parcel Service (UPS) has agreed to road test the Dodge Sprinter, a medium-duty fuel cell vehicle manufactured by DaimlerChrysler. The Sprinters are the second delivery vans UPS has ordered, and the company plans to use them along routes in Sacramento and Los Angeles in California, and in Ann Arbor, Michigan.

Santa Monica, California – September 2, 2004 [SolarAccess.com] In March of this year, the delivery service began using a smaller, F-Cell car from Mercedes Benz on an Ann Arbor route, and the road tests were encouraging. “Shifting away from a fossil fuel based economy to a hydrogen economy would be a great environmental and technological achievement,” said Chris Mahoney, UPS senior vice president of Global Transportation Services. “UPS now is jumping from a small fuel cell car to a medium-duty truck. We will continue the rapid application of this technology in hopes that in the near future, we can deploy zero-emission engines across our fleet of 88,000 vehicles.” The UPS road tests with DaimlerChrysler are partially a result of a collaborative effort involving the U.S. Environmental Protection Agency (EPA) to advance the state of hydrogen fuel cells by harnessing the technology to power the first commercial delivery fleet in North America. The F-Cell is fueled daily at the EPA’s hydrogen fueling station at its National Emissions Testing Laboratory in Ann Arbor. DaimlerChrysler and UPS have already tested a medium-duty vehicle in Germany, and the Sprinters were built in part on information gathered during these road tests. “Our two test programs showed the on-road reliability of fuel cell vehicles is excellent, equivalent to our current fleet,” said Mahoney. “But what’s truly exciting is how fast the technology is progressing.” According to DaimlerChrysler the new fuel cell Sprinters feature a 20 percent increase in powertrain efficiency over the first series of Sprinters. They also have a 40 percent increase in travel range to 155 miles, and a 45 percent increase in peak engine power. Acceleration in the new vans is equal to the standard gas- or diesel-powered UPS vehicles.

Mahoney said that UPS is excited by the prospect of a significant reduction in maintenance expenses since the drive train should last longer than that of a gas or diesel engine. Because the fuel cell is located on the bottom of the van, compared to the standard location of a vehicle engine, the new van configuration offers a 10 percent increase in cargo capacity. One of the remaining hurdles for both companies, however, is the need for more hydrogen refueling stations. “The refueling infrastructure is the next critical need,” Mahoney said. “Only by making hydrogen as broadly available as gasoline or diesel can passenger cars and fleets truly reap the environmental and economic benefits.”