A unique bioreactor at the Energy Department’s National Renewable Energy Laboratory (NREL) can help find the ideal locations for farms to produce algae that could someday compete with renewable diesel, cellulosic ethanol, and other petroleum alternatives as transportation fuel.

It does so by revealing the intricate biochemical rearrangements that algae undergo when grown in different locations in the United States. The bioreactor has also demonstrated that algae grown in ideal climates and given the optimal amount of nutrients can produce not just lipids, but proteins and carbohydrates that can be turned into diesel, butanol, ethanol, and other fuels useful to industry. 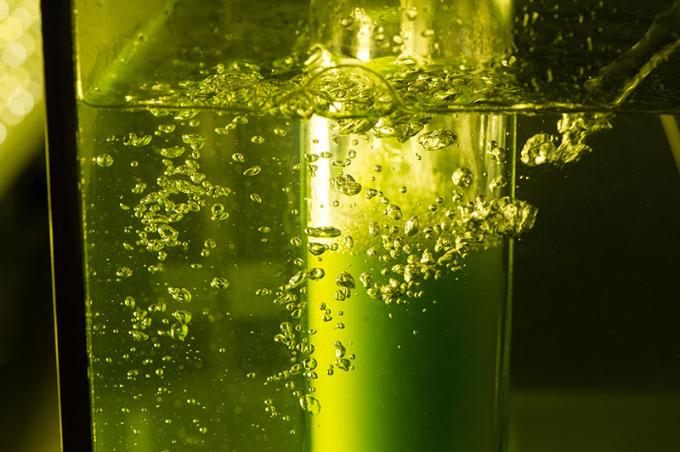 Aeration helps algae grow and helps replicate real-life conditions in the Simulated Algal Growth Environment (SAGE) reactor at NREL. The reactor controls light and temperature, helping scientists determine not just what strain will grow the best, but where in the United States it may do so. Ideal strains can be harvested for their lipids, proteins, and sugars for use in biofuels. Photo by Dennis Schroeder, NREL

“We’ve almost doubled the fuel we can get out of the same amount of biomass by using these additional components,” said NREL Senior Scientist Lieve Laurens.

The reactor so precisely controls light, temperature, and delivery of carbon dioxide that it can mimic conditions anywhere. If scientists want to know how algae will grow in brackish water in the southwestern United States under mostly sunny skies, the dials can be set for that precise meteorology. NREL’s bioreactor is unique because despite its large size and greatly increased capacity, it can replicate entire locations and climates—day, night, sunlight intensity, and temperature profiles. Light intensity is programmed, as is carbon dioxide delivery and uptake.

“We can model how a particular strain would grow in different locations around the United States, and how this impacts the oil productivity,” as well as the general biochemical composition of the biomass, Laurens said.

Algae use the chlorophyll in their cells to turn sunlight into energy through photosynthesis. Add in nutrients and carbon dioxide, and the algae can produce sugars while rapidly reproducing. 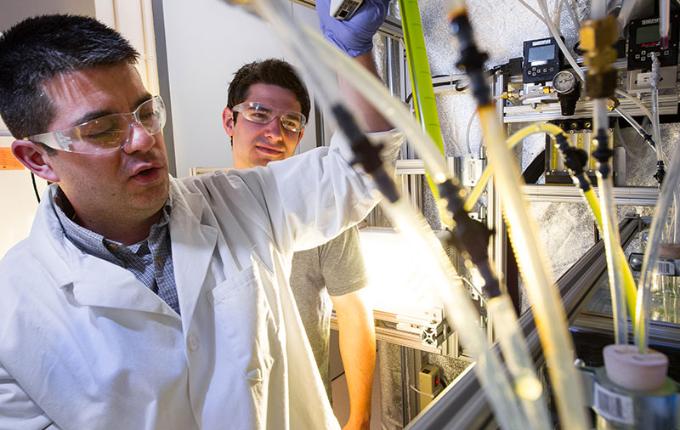 NREL has also come up with better and faster ways to analyze and characterize the components in the algae conversion process. “We harvest every other day,” yielding maximum information about the changes in an algae population that can double in size twice a day, Laurens said.

Algal cells absorb the sunlight, which, together with carbon dioxide, grows the colony. For the strains being evaluated, the more humid air and warmer nights of Arizona look more conducive to optimal growth than the high desert climate and very cold nights of New Mexico. This makes sense because these strains have been cultivated extensively outdoors in Arizona. Algal strains adapted to New Mexico’s climate may not grow as well in Arizona.

Laurens and NREL Bioconversion Engineer Nick Nagle can also trick the algae into doing more useful things than simply multiplying in number. For example, if they stint on the amount of nitrogen available, the algae go into storage mode, rather than multiplying mode. Some algae double in size a couple times a day when enough nutrients are available. When the nutrients run out, the algae stop growing so fast. But carbon dioxide and sunlight are still present, so in the interest of self-preservation, the algae store that carbon dioxide as high-energy organic molecules. It’s a change that can be seen over the course of a few days.

“Once the algae run out of nitrogen, they turn into couch potatoes,” Nagle said. “The cells start eating a lot of carbon and sitting around, putting on weight. That weight is literally in the form of carbohydrates and oils” — just what the biofuels industry needs from the little critters.

The “feed and starve” rotation is one useful pathway to getting more oils out of the algae.

Industry Wants All Parts of the Algae Now

NREL is working with Arizona State University to examine how champion strains of algae convert sunlight into biomass, keep nutrients viable, and respond to light energy. Early on, the protein content is high; then carbohydrates have their day in the sun, followed later by lipids.

“From the feedstock, we get these different products — lipids, proteins, carbohydrates,” Nagle said. A few years back, industry would approach research labs with a specific request — how to use algae to get diesel oil. Now, they want it all: protein to turn into butanol or methane; lipids to turn into diesel; carbohydrates to turn into a third fuel.

From 1978 to 1996, NREL embarked on a great search and cataloging of algae. “It’s fun to think it’s all coming back,” said Nagle. “We’re now working with industry partners and other universities, collaborating and really moving this forward.”

NREL’s contributions include using sunlight to drive growth, and using growing cells to convert solar energy to chemical energy by converting carbon dioxide to organic molecules, along with a comprehensive analysis of the different biomass components.

“We take these champion strains and put them into virtual environments, particular locations in the United States that lend themselves really well to algae cultivation,” Laurens said. “We’re working with partners in Florida, California, Arizona, Ohio, and Hawaii to quantify how the rain and temperature mix affect growth and composition of the biomass produced.”

NREL is analyzing how to get the most out of the harvested biomass. A pretreatment with dilute acid yields fatty acids that can be used for diesel-like biofuels and carbohydrates that can be fermented to ethanol. That still leaves proteins that can be used for other kinds of fuel. Working with Sandia National Laboratories, NREL researchers are subjecting proteins from algae to a fermentation process to boost the production of short-chain alcohols such as butanol.

“We’ve been able to examine the fine variables and recommend the best tradeoffs in production of biomass, taking the biomass chemical composition into account. Like, ‘this scenario won’t yield as much biomass, but you would get much higher oil content,'” Laurens said. “Ultimately, it will come down to how many total gallons of biofuel we can make per acre of algal ponds per year. This is no different than our measure of corn productivity in terms of bushels per acre per year.” Researchers ultimately place all the pieces together and advise on the process’ economic viability through a techno-economic analysis.

In large-scale outdoor cultivation — for example, in large open ponds such as those in Columbus, New Mexico, or Phoenix, Arizona—a tweak here, an extra boost of nitrate there, more sunlight here, a little less nitrogen or a little higher temperature there, and a champion strain can produce oils and carbohydrates in a familiar setting. Wastewater facilities can be a prime setting for closing the loop — from the anaerobic digestion of the non-fuel components of the biomass, which generates the energy and the methane, to the nutrients that can be recycled to feed another generation of algae.

Industry Is Intrigued, and Wiser, About Algae

Nagle remembers the heady times in the 1980s when oil companies invested a lot of money in algae research. “It’s like we put a message in a bottle and sent it out to sea,” he said. “Now it’s coming back, and that’s pretty exciting.” 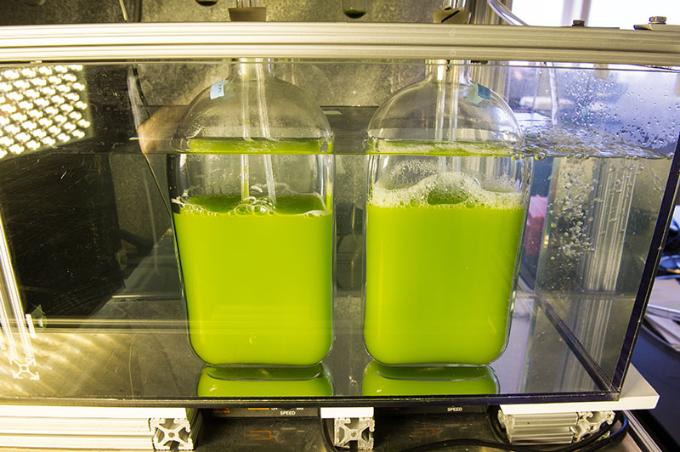 After the first romance with algae, irrational exuberance ebbed, and oil companies became wiser and smarter, say Laurens and Nagle. These companies are investing dollars in algae research again, and funding from the Energy Department’s Bioenergy Technologies Office has become more consistent.

Companies such as Exxon are looking for proof that algae can be important players in the biofuels landscape of the future. “They’re investigating all the pathways,” Laurens said.

Cost is falling steadily, and “you’re not going to run out of algae” as production increases, Nagle said.

NREL will remain a key player, “a good neutral third party in the game, doing our own great research but also keeping our finger on the pulse of industry,” Laurens said. “It allows us to gauge who is where. And we see that that there’s a lot going on, that they’re starting to take this very seriously. We’re seeing companies that are serious, that have significant plans for the commercialization of algae.”