With oil despoiling the U.S. Gulf of Mexico coast and coal mines caving in from China to West Virginia, it seems time for some good news so here it is: The entire world is clearly and unequivocally aware of the urgent need for negawatts. Negawatts are the ones that don’t get consumed, the energy that is conserved when efficiency is put to work. It is a measure of electricity that is not generated. Negawatts are the cheapest New Energy money can buy.

There has not been a report on New Energy in months which has not recommended the aggressive Energy Efficiency targets alongside New Energy goals, targets and standards. To see how widespread the growing awareness of Energy Efficiency’s importance is, scroll down the page and surf through the back posts in the right column to study the 3-to-4 reports per week this page assesses.

There is no better proof of the point than Energy for a Sustainable Future, from United Nations Secretary-General Ban Ki-moon’s Advisory Group on Energy and Climate Change. To help turn back global climate change and meet the U.N.’s Millennium Development Goals (MDGs) to end poverty, the report calls for the delivery of New Energy to the world’s 2 billion poorest people who are off-grid and out of the global economy. Collectively, they so far use little of the world’s energy. The report calls not only for delivering New Energy to them to bring them into the world’s economic community but also for helping them become much more efficient in their use of it. ::continue::

Development out of poverty is a virtually insurmountable ideal for the billions of people in the world who have no access to reliable, affordable energy services. The report therefore calls for universal basic access to modern energy services by 2030, with substantial provisions to use it efficiently so that global energy intensity falls 2.5% per year – twice as fast as it has fallen in recent years – for an overall 40% drop in the units of energy used per GDP dollar worldwide. 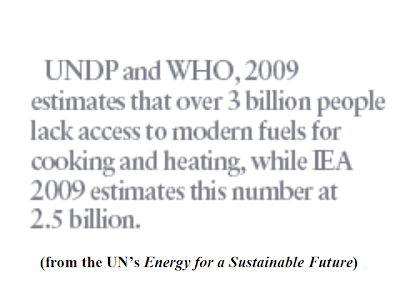 It is only with such an emphasis on efficiency that vital energy can be delivered to the billions who need it without adding mega-amounts of the greenhouse gas emissions (GhGs) that aggravate global climate change to an already worsening situation. With such an emphasis Energy Efficiency, the needed energy could be delivered with only a 1.3% increase in GhGs.

The best part is that negawatts cost probably no more than one-third what the cheapest megawatts cost. This is a crucial factor because the report’s central message is that the community of nations MUST transform the world’s energy system, no matter the cost. Delivering enough New Energy for the transformation will be expensive and require a concerted public and private financing effort with significant commitments from national Governments and the international community.

Spending on negawatts returns $2-to-$3 for every $1 spent, earning money that can subsequently be spent on New Energy infrastructure.

The UN study reports that Brazil, China, and Viet Nam have shown it is possible to rapidly expand energy access and China, Denmark, Japan, Sweden and California have dramatically improved their Energy Efficiency. An array of policy options are identified that should be selectively applied to high-, middle- and low-income nations.

Children of the post-World War II “baby-boom” generation often prayed for “world peace and the end of poverty.” Despite the best efforts of the United Nations, born in the same post-World War II boom, the children of the current “baby-boom,” now coming into adolescence and early adulthood, grew up praying for the same things. Perhaps the UN has finally discovered the “efficient” way to give those prayers “new energy.” 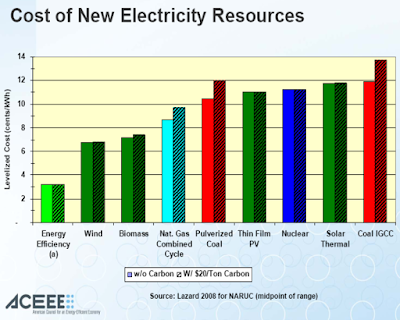