More
Home Blogs Uh, there are a couple of things about the cost of that...

It would be so great if they came up with a way to really make coal clean. Or if they figured out how to make dirt clean.

It would be such a relief, if there was a practical, cost-effective way to do it, to give coal’s obstinates their heads and tell them to go worship the past by burning all the black rocks they want but just stay out of the way of the New Energy future.

As David Biello details in CO2 Capture and Storage Gains a Growing Foothold, the coal industry is ignoring good reasons not to and bulling ahead with its plans to dig and destroy and spew. Despite the heroic efforts of the No New Coal Plants activists in the Climate Justice coalition (perhaps the most determined and effective grassroots movement since the Sons of Liberty threw the Boston Tea Party), the coal industry’s built and planned plants in this past decade will emit more spew in the next quarter century than has been emitted since the 1751 birth of the Industrial Age.

In the face of this determined growth by Big Coal, it is easy to understand why the leaders of industrial countries around the world are willing to spend whatever it takes to make the myth of “clean” coal – also known as carbon capture and sequestration (CCS) – into a reality. But “clean coal” is one of those dreamed-of things that there isn’t enough money to buy. ::continue:: 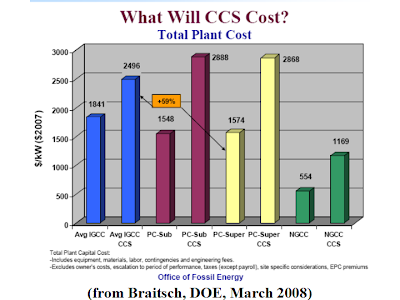 The myth of “clean” coal probably goes back to the oil industry’s pumping of captured carbon dioxide (CO2) into failing wells to flush out more oil. This was a limited practice and rarely – not never, but rarely – resulted in the gas escaping from the deep oil-harboring pockets into which it was forcefully pumped. The procedure made the whole coal-to-electricity process a little more profitable. But no cleaner.

Someone, probably one of the old oil wildcatters whose drilling typically came in perhaps 1 in 10 times, took the idea to more coal companies. They decided paying the drillers to put CO2 into unproductive wells was a good way to get rid of it.

Flush with the thrill of a “solution” that made burning fossil fuels more lucrative for both oil and coal, the industries shared their joy with the many Congressmen and Senators they owned. Soon, the halls of power were ringing with joyous bipartisanship as climate change-concerned politicians saw something they could tout as an answer to the problem of greenhouse gases.

Campaign contributions from the fossil fuel industries went out on both sides of the aisles and never afterward was muttered a mention about the future of coal that didn’t include the phrase “with carbon capture and storage” or “with CCS.” The coal industry’s lobby liked the concept of “clean” coal so much they decided to keep promising it to Congress even after they concluded it was too expensive to ever actually happen. It is easy for wishful politicians to assume that because some limited and relatively untested CCS has been done profitably, it will get better and cheaper at commercial scales. The key word there is “assume” which, as everyone knows, is made of up of the syllables “ass” and “you” and “me.”

The first problem is capturing the unimaginably enormous quantities of CO2 produced to feed Western society’s insatiable appetite for electricity everyday. But there is technology to do it. Make no mistake: it can be done. It would probably come close to doubling the price of the electricity (OK, a 40% increase, according to one reliable study, from $63 per megawatt-hour to $103 per megawatt-hour), but it CAN be done.

Even assuming the plan to use not only oil wells but deep geologic formations to store the captured CO2 is workable, the world would need to build a pipeline system the size of the one now used to move oil to move the captured spew to the storage sites (and, no, oil’s pipelines won’t do, CCS would require its own transport). The cost of building such a pipeline system would add enormously to the price of power and the time it would take to build would leave coal plants emitting into the air for decades.

At this point, the coal would be “clean” – except, of course, for (1) the environmental disaster of mining it and (2) the other toxins besides CO2 that escape into the air and the groundwater when it is burned to poison wildlife and deform the unborn. The “only” problem with for “clean” coal remaining is keeping it safely in the holes in the ground where humankind, answering its lowest animal instincts, has chosen to stick its waste. 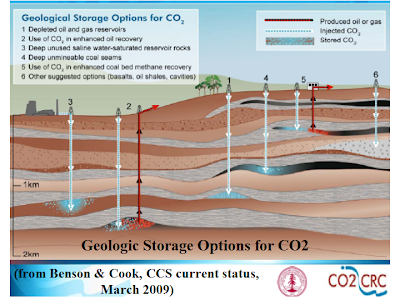 Funny thing about those holes in the ground: A brand new study by none other than oil industry experts finds it would take a hole the size of a small U.S. state to contain the emissions of a single 500 megawatt coal plant. The U.S. uses 800 GIGAWATTS per year of CO2-emitting power.

Time to admit Puerto Rico and Guam into the union because if the U.S. can pull together 1,600 small states with useable geologic sequestration underneath them, it will have enough space to store its spew. One year.

Sequestering Carbon Dioxide in a Closed Underground Volume, presented to the Society of Petroleum Engineers by M.J. Economides of the University of Houston and Christine Ehlig-Economides of Texas A&M University , took a closer look at the rates and volumes necessary to inject huge quantities of CO2 into those holes in the ground. Economides called the conclusions “…quite negative and, in fact, sobering.”

To safely sequester CO2 in a closed system the volume of liquid (CO2 has to be compressed from a gas to a liquid to move it to the sequestration sites) cannot exceed more than about 1 percent of pore space. This means it will require 5-to-20 times more underground hole space than had been previously assumed: “…and it renders geologic sequestration of CO2 a profoundly non-feasible option for the management of CO2 emissions.” 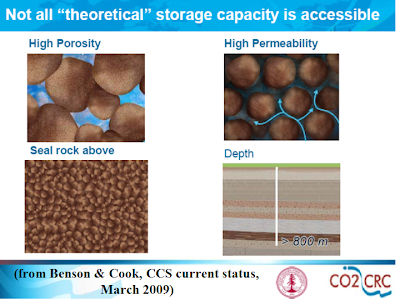 It is pretty obvious the Obama administration strategy is to give the coal industry money to do its experiments and let it prove CCS unworkable. The danger of this strategy is that early CCS projects could appear more financially successful if the coal companies offset their costs selling byproducts for things like fertilizer and concrete fill.

But there are only so many markets for byproducts, whereas the generation of electricity for modern civilization – like rust – never stops. Early CCS pilot projects may make the technology seem expensive but financially feasible, only to be revealed unworkable after spending for a fleet of projects wins approval from gullible politicians led down the garden path by the coal lobby.

Somebody needs to get busy figuring out how to explain to political leaders lost in the dream of an easy answer (and to a desperate industry uncompromisingly committed to saving itself) that, yes, this thing you are trying to do can be done on a small scale but, by the time you do it in a big enough way, it will cost so much and leave you with so many other problems that it just isn’t worth doing anymore.

Dreams die hard. But, as Bob Dylan once observed, as long as you’re dreaming you’re still asleep. Which is why anti-coal activists around the world are screaming “WAKE UP!” 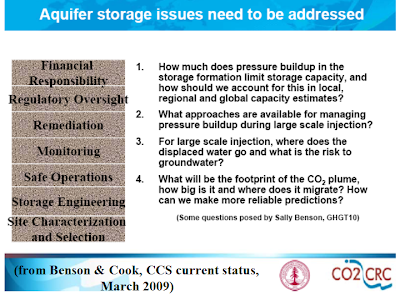 This post is (loosely) based on CO2 sequestration isn’t practical by Michael J. Economides (February 20, 2010, Casper Star-Tribune) and CO2 Capture and Storage Gains a Growing Foothold; The drive to extract and store CO2 from coal-fired power plants is gaining momentum, with the Obama administration backing the technology and the world’s first capture and sequestration project now operating in the U.S. Two questions loom: Will carbon capture and storage be affordable? And will it be safe? by David Biello (18 Februqry 2010, Yale 360)and DOE Publishes Best Practices Manual for Public Outreach and Education for Carbon Storage Projects; New Publication Aims to Facilitate Project Success, Boost Effectiveness of Outreach Efforts (January 13, 2010, U.S. Department of Energy)