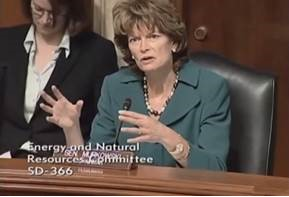 A grid modernization bill — one that takes steps toward federal microgrid policy — is likely to reach the floor of the U.S. Senate early next year, according to Sen. Lisa Murkowski.

If passed, the Energy Policy Modernization Act of 2015 (S. 2012) will heighten the federal role in supporting microgrids, which has been largely a state endeavor to date.

Murkowski, a Republican from Alaska, was among several speakers at last week’s “Energy Across America: A Policy Discussion on Microgrid Technology,” sponsored by ABB and held by The Hill at the Newseum. Murkowski sponsored S. 2012 along with Sen. Maria Cantwell, a Democrat from Washington.

The legislation promotes a range of technologies and policies to make the grid more reliable and cyber-secure. These include grants, demonstration projects and studies to determine costs and federal microgrid policy.

Murkowski, who heads the Senate Energy and Natural Resources Committee, sees the bill as crucial because Congress has failed to pass comprehensive energy legislation in about a decade. Meanwhile, the energy sector has seen tremendous change.

“Everything changes fast except our policies and laws,” she said at Thursday’s session.“What we need to do from the government side is help encourage this innovation instead of doing what we seem to do best — which is confound and obfuscate.”

Murkowski has been a strong advocate of remote microgrids in her home state of Alaska, which is already a world leader for microgrid installations.

Other panelists cited regulation — or more specifically lack of federal direction — has a key stumbling block for microgrids.

“A lot of policy issues need to be resolved, and I think that’s going to take a couple of years,” said Bill Gausman, senior vice president of strategic initiatives at Pepco, the utility that serves Washington, D.C.

He sees a role for the Department of Energy and Federal Energy Regulatory Commission not in dictating rules, but in helping to define ‘microgrid’, as well as its services, and the role utilities will play on the new grid.

Tremendous interest exists in moving microgrids forward, but without resolution of policy issues, it’s likely to take three to five years for the industry to get beyond building simple campus microgrids into more complex community microgrids, according to Gausman.

Nathan Adams, ABB’s general manager North American microgrids, said that he hopes to see the market emerge more quickly. Alaska, Canada and the Caribbean already are seeing activity. The mainland U.S. will follow as regulatory issues are sorted out.

The microgrid industry needs to get “the right cases in the ground” to show microgrids are a proven technology, Adams said.  “After that, I think it will accelereate dramatically.”

Charles Hanley, senior manager at Sandia National Laboratories, said he sees the microgrid industry booming in the next 5 to 10 years. “There is so much technology coming on line and the costs are coming down and reliability is increasing that I see a huge and growing industry for this.”

Katherine Hammack, an Army assistant secretary of the Army, said that the U.S. microgrid industry needs consistent definitions and protocols on connecting and disconnecting microgrids from the grid, use of net metering and other “rules of the road.”

Having rules differ from state to state or region to region makes it difficult to standardize microgrid design. “We are doing one-offs everywhere,” she said.

The need for more consistent policy comes as the Army transitions away from what she described as dumb microgrids — simple power back up operations — which describe most of the Army’s 100 microgrids in operation. Newer smart microgrids, which the Army is now pursuing, can interact with the main grid in more sophisticated ways, managing multiple sources of renewable energy, prioritizing loads, and moving energy to places where it is needed most during an outage.

She offered the Fort Drum microgrid in Jefferson County, New York as an example of the new sophistication. The Army converted a coal-fired generator to a 60-MW biomass microgrid that serves both the base and the grid. The project recently successfully completed a test of islanding and reconnecting 20 MW of load from the grid in cooperation with the local utility, a complicated endeavour that can disrupt the central grid if not done correctly.

Hammack also described a project underway on the Hawaiian island of Oahu, where there are several military facilities. All of the island’s power generation is on the shoreline in the tsunami zone. So the Army has given Hawaiian Electric, the island’s utility, an easement to build a microgrid on the island’s highest point. The dual fuel microgrid will be able to restart power to an Army air field, a community hospital and an Army base. The microgrid will restore critical services and be a gathering point for humanitarian relief. “When we look at resiliency and critical services, that’s the kind of scenario a microgrid can provide,” she said.

Even in an Election Year

In terms of the Senate bill, it faces the same big question as all in Congress: Can it overcome gridlock?  The House has put forward its own energy legislation, the North American Energy Security and Infrastructure Act of 2015, sponsored by Fred Upton, a Republican from Michigan. The bill passed the House Dec. 3 and now goes to the Senate for consideration. The Upton bill emphasizes energy efficiency and calls for utilities to create resiliency plans, but does not put the same emphasis on microgrids as the Murkowski bill.

However, Murkowski expressed optimism about reconciliation between the Senate bill and House bill next year.

Join Microgrid Knowledge in Manhattan May 19 for “New York and Beyond: Advancing Microgrids Nationally with Lessons Learned in New York.”

This article was originally published on MicrogridKnowledge.com and was republished with permission.