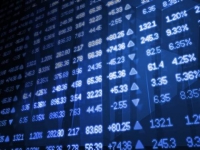 While many people think first about hydrogen when they think of fuel cells, fuel cells are not limited to hydrogen. They are a set of related technologies, many of which can generate electricity from a number of hydrocarbon fuels rather than hydrogen.

I limited my recent post on the rapid rise of hydrogen stocks to just U.S.-listed companies involved in the production and use of hydrogen, leaving out foreign stocks and other fuel cell technologies for brevity.

In my research for that article, however, I came across fully ten publicly traded companies involved with either hydrogen or other types of fuel cells.  Here they are, along with descriptions of the technologies drawn from the Department of Energy and company websites. 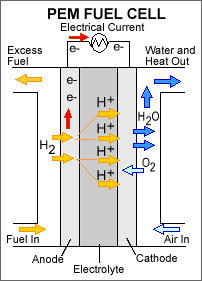 The most common type of fuel cell, and the one most people think if first, is the Polymer Electrolyte Membrane or Proton-Exchange Membrane (PEM) fuel cell.  These cells run on hydrogen at fairly low temperatures around  80°C (176°F).  They have the advantage of quick start-up and good durability because of the low temperature operation.  Unfortunately, they require an expensive noble metal catalyst, usually platinum, which is particularly sensitive to impurities in the hydrogen fuel.

PEM fuel cells are primarily used for fuel cells in vehicles, but have also been used in stationary applications.  The most developed market is materials handling (i.e. forklifts used in warehouses.)  Their lack of harmful tailpipe emissions makes them suitable for indoor use, while quick fueling and longer run time make them more suitable for heavy duty cycles than similar electric vehicles.

Proton Power is a demonstration stage company with a focus on hybrid electric-fuel cell drive trains for larger vehicles such as delivery trucks, buses.

Since pure hydrogen does not occur naturally, the hydrogen economy cannot run on fuel cells alone.  A number of companies are tackling the creation of hydrogen (usually by electrolysis, or using electricity to split water in to hydrogen and oxygen), as well as fueling and storage.

Hydrogenics (NASD:HYGS) is a commercial stage company that develops and sells electrolyzers for hydrogen generation.  This is often integrated with hydrogen storage and PEM fuel cells, as well as hydrogen fueling stations.  It sells into both stationary power and vehicular markets.  ITM Power (LSE:ITM) sells commercial electrolyzers for hydrogen generation in hydrogen fueling stations, for industrial use, or injection into natural gas pipelines.  Quantum Fuel Systems Technologies Worldwide (NASD:QTWW) sells a number of alternative fuel vehicle drive-trains and parts including hydrogen fuel tanks, but most of its current sales come from natural gas vehicles.

One oddball company brought to my attention by a reader is HyperSolar, Inc (OTC:HYSR).  Hypersolar is a very early stage developer of a solar powered system to directly use solar power to produce hydrogen from water.  While cutting out the extra step of converting sunlight to electricity with photovoltaics before using electrolysis to split hydrogen from water may sound attractive, the company is at an extremely early development stage and does not have sufficient funding to advance its technology.  It’s also not clear if the technology is more efficient at converting sunlight to hydrogen than the combination of photovoltaics and electrolyzers would be, or what the capital costs are.   I can’t imagine any scenario where a long term stock market investor could make a profit on HyperSolar.

Fuel Cell Energy (NASD:FCEL), discussed below, is currently developing a fuel cell that can generate hydrogen as well as electricity from various hydrocarbon feedstocks. 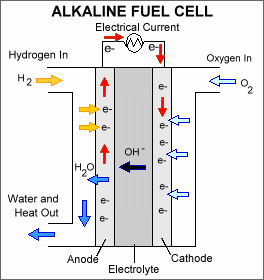 Alkaline Fuel Cells (AFCs) have a solution of potassium hydroxide in water as an electrolyte which allows the precious metal catalyst of PEM fuel cells to be replaced by a variety of non-precious metals.  AFCs are one of the most efficient types of fuel cell, and have demonstrated efficiency near 60% in space applications. Unfortunately, AFCs are very sensitive to exposure to carbon dioxide and require both the hydrogen and oxygen used by the cell to be purified beforehand, which is a very costly process.

AFC Energy (LSE:AFC) is a developer of alkaline fuel cells for use converting waste hydrogen from industrial processes into useful electricity.  This seems like an interesting niche market and may prove profitable if AFC’s fuel cells prove sufficiently durable. 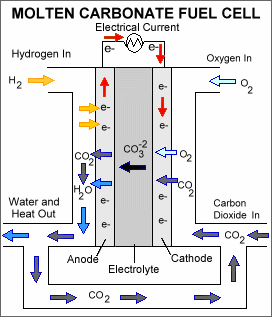 Molten Carbonate fuel cells (MCFCs) use a high temperature salt mixture suspended in an inert ceramic matrix as an electrolyte.  The 650°C (roughly 1,200°F) at which they operate allows non-precious metals to be used as catalysts on both the anode and cathode, leading to significant cost reductions.

MCFCs are typically 45 to 50 percent efficient at converting fuel to electricity, but that efficiency can be increased significantly by capturing the high quality waste heat and using it to drive a turbine or in other combined heat and power (CHP) applications, where they can have efficiency as high as 85 percent.

The greatest advantage of MCFC’s is that they do not require an external reformer.  They can internally convert a wide range of hydrocarbons including natural gas, biogas, and propane into hydrogen for power generation.  Unlike PEMs and AFCs, they are also not vulnerable to “poisoning” by carbon monoxide or carbon dioxide.

The main downside of MCFCs is durability.   Their high operating temperatures and corrosive electrolytes can degrade components relatively rapidly.

The main public company commercializing MCFCs is Fuel Cell Energy (NASD:FCEL.)  It sells its fuel cells mostly into stationary power markets for distributed generation and CHP.  The company has sold hundreds of megawatts of its Direct FuelCell® power plants  and has a strong financial backer in Korean power producer POSCO Energy.

Solid Oxide Fuel Cells (SOFCs) use a solid ceramic as the electrolyte.  They operate at even higher temperatures than MCFCs (approximately 1,000°C  or 1,830°F) which, as in MCFCs, allows the use of non-precious metals as catalysts and for internal reforming of fuel into hydrogen, both of which reduce costs.  SOFCs are extremely fuel-flexible.  Like MCFCs, they are not vulnerable to carbon monoxide or carbon dioxide, but they are also able to tolerate much higher concentrations of sulfur.  This flexibility allows SOFCs to use fuels made from coal, as well as cleaner hydrocarbons.

The very high operating temperatures can impair durability, and also require thermal shielding to retain heat and protect workers.  Newer, lower temperature variants which operate below 800°C for greater durability have been developed at the cost of lower power output. .

Two public companies commercializing SOFCs are Ceres Power (LSE:CWR and OTC:CPWHF) and Ceramic Fuel Cells (ASX:CFU and LSE:CFU).  Ceramic Fuel Cells markets small scale SOFC based combined heat and power units to commercial customers in Europe.  Its fuel cells have industry leading electrical efficiency of up to 60%, and the overall efficiency of the CHP units is naturally much higher. Ceres Power has developed a lower temperature SOFC which operates at 500 – 600°C, allowing the use of stainless steel components which increase durability and allow for quicker start times than other SOFCs.  Ceres is currently targeting South Korean and Japanese markets where it hopes to sell its CHP units to replace residential boilers to produce both heat and majority of a home’s electricity.

None of these companies is yet profitable, and their products are not yet cost effective except in niche markets or with significant subsidies.  That said, several have strong financial backers and have been growing revenues significantly over the last couple years.

Events such as Hurricane Sandy and Japan’s Fukushima nuclear disaster have increased public interest in the resilience of the electric grid.  With its small scale and low emissions, fuel cell technology is well suited to increasing local resilience with distributed installations.  Fuel cells’ high efficiency can also make them economical in countries dependent on expensive imported liquefied natural gas.

If these trends persist, or if fuel cell vehicles become more than a way for automakers to comply with environmental standards, some of these companies are likely to become profitable in just a few more years.  I personally would not bet on hydrogen outside of niche markets, but I think distributed combined heat and power with carbonate and solid oxide fuel cells has real potential.

This article was first published on Forbes.com on December 11th and AltEnergy Stocks and was republished with permission.