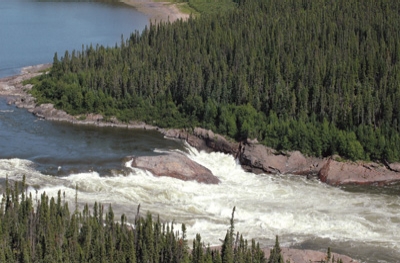 The turbine is one of many vital pieces of equipment required to generate electricity in a hydroelectric plant. At three hydro projects in Europe, owners have applied innovations and made modifications designed to make the best use of this valuable piece of equipment. Turbine and mechanical component work featured in this article includes: installing a turbine above the tailwater level, modifying the nozzles for a Pelton turbine to increase performance, and incorporating a smaller turbine that rotates counter to the larger units at a pumped-storage facility. These innovations in the design and selection of turbines and other mechanical components are saving money, improving unit efficiency, and allowing greater plant flexibility.

Installing a larger, higher unit to save excavation costs

When rehabilitating the 2.8-MW Ludvika plant on the Kolbacksan River in Sweden, owner Vasterbergslagens Kraft AB needed to replace the two Francis units. These units, which began operating in 1930 and 1941, were taken out of operation in January 2007 to prepare for plant rehabilitation. At that time, Anlaggningsentreprenader Hogtryck AB of Sweden received a US $3.8 million contract for the civil work.

The company received proposals from two vendors to install turbines with a runner diameter of 1.6 meters to 1.7 meters and a small flywheel. However, to avoid cavitation damage these units would have to be set far lower than the 138-meter tailwater level. This would entail extensive, and expensive, excavation.

Another bidder — a consortium of Koessler in Austria and Lloyd Dynamowerke in Germany — proposed to use a Kaplan turbine with a diameter of 2.12 meters. A larger unit would be more expensive, in terms of manufacturing costs, the larger generator with more poles, and a larger flywheel. However, the design of this unit would allow it to be installed at an elevation of 139 meters, 1 meter above the maximum tailwater level. This would save US$400,000 in excavation costs and construction time. As a result, installation of the larger Kaplan unit would be US$200,000 to US$300,000 less expensive than the smaller units. Vasterbergslagens Kraft chose this option. Koessler supplied the Kaplan turbine and Lloyd Dynamowerke supplied the synchronous generator.

The refurbished facility began operating in October 2007 with a single new 3.6-MW unit. The plant now produces 13 gigawatt-hours (GWh) of electricity each year, compared with 10 GWh before the rehabilitation. The owner of the facility anticipates a 12- to 14-year return on investment.

For Pelton turbines, nozzle design is a key parameter to attain high performance with respect to jet dispersion. Nozzle design can be optimized for both new units and for rehabilitation of existing hydro projects, as the nozzle is a component that can easily be replaced in old turbines.

For example, as part of the rehabilitation of the 510-MW Lotru-Ciunget project on the Lotru River in Romania, owner Hidroelectrica S.A. is replacing the nozzles on all units. This powerhouse contains three units that began operating between 1972 and 1975. Because of the age of the units, Hidroelectrica determined rehabilitation was needed.

Voith Hydro (formerly Voith Siemens Hydro Power Generation) is performing refurbishment work on the Lotru-Ciunget project, under a US$101.7 million contract awarded in January 2007. This work involves rehabilitating all three turbine-generator units and auxiliary equipment. The work is expected to be complete in 2011.

For the Pelton turbines, new nozzles were ordered. These new nozzles were developed and supplied by Andritz Hydro as a subcontractor of Voith Hydro. Andritz Hydro performed fully homologous model testing and measurements of both the existing nozzle design and potential design changes to the nozzles for the three units. Results of this testing indicated that changing the hydraulic profile of the nozzles would result in a performance increase of more than 1 percent. This improvement was a result of optimizing several parameters: flow conditions in the turbine housing, nozzle geometry, and the transition between the manifold and nozzle. Before the rehabilitation, the Lotru-Ciunget plant produced 1,150,000 megawatt-hours (MWh) of electricity each year; with the modification, this is predicted to increase by about 10,000 MWh.

The rehabilitation work at Lotru-Ciunget is part of a larger program to integrate national energy systems of southeastern Europe into the European Union energy market.

For pumped-storage hydro facilities, the speed at which a unit can change from pumping to generating mode and vice versa is very important. This speed and flexibility allows the plant to act as a storage facility, by storing water during periods of low demand and releasing it for generation during periods of high demand.

In northwest Italy, power utility Enel operates the 360-MW Ronco Valgrande pumped-storage plant near Lake Maggiore. The plant, built in 1971, contains four pump-turbine units featuring Pelton runners. Immediately below each of the Pelton runners, on the shaft, is a smaller Pelton unit that was incorporated in the design when the plant was built. This unit rotates in the opposite direction of the main unit and is powered using water from the main penstock that is supplied by a small Y-branch manifold.

In addition, each unit features a special mechanical clutch system to rapidly couple or uncouple the pump and turbine on the same shaft at standstill. This allows Enel to operate either the pump or turbine, as required, to balance the variability of wind production. In 2008, Italy was the world’s sixth largest producer of wind power, with installed capacity of 3,736,000 MW, according to the Global Wind Energy Council.