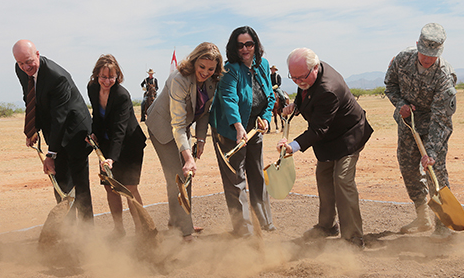 Located in the University of Arizona Science and Technology Park, the Li-ion battery-based energy storage system (BESS) will be more responsive and efficient than a conventional power plant in its ability to provide grid stabilization services, according to an E.ON press release.

Incorporating a new 2-MW PV solar array, the Iron Horse LiB-based energy storage system will provide TEP the opportunity to further evaluate integration of variable solar power flows on to its T&D network. The project is slated to come online in the first half of 2017.

“We want to learn how energy storage can be used to improve service reliability while studying how such systems can support the expansion of renewable energy resources,” Joseph Barrios, TEP supervisor of media relations and regulatory communications, told Renewable Energy World in an email.

TEP aims to deliver at least 30 percent of its power from renewable resources by 2030, double that set out in Arizona’s 2025 Renewable Energy Standard and Tariff (REST), Barrios said.

“We anticipate an additional 800-MW of new renewable capacity by the end of 2030, boosting total renewable energy capacity to approximately 1,200 MW,” he said. “Just last week, we issued a request for proposals for a new 100-MW solar facility that would begin producing power in early 2019.”

E.ON Climate and Renewables signed a 10-year agreement with TEP to provide frequency response and voltage control via Iron Horse in July. The utility-scale LiB storage facility is one of two such projects TEP intends to launch this year.

NextEra Energy Resources is building another 10-MW/2.5-MWh LiB energy storage system for TEP at one of its substations in Tucson. The Arizona Corporation Commission approved the plans for both systems in May.

“Our infrastructure currently has no energy storage systems, so we expect to gain valuable insight into how these systems can help us to improve reliability and improve service for our customers. We expect that it will help to inform our resource planning decisions in the future,” Barrios said.

“We’re working very hard to integrate cost effective, innovative technologies that will improve service for our customers and support our expansion of renewable energy,” Carmine Tilghman, TEP senior director of energy supply and renewable energy, said in a statement.

Regarding components, Iron Horse will make use of Toshiba LiBs. Greensmith is providing the overall facility monitoring, control and management platform, Will Eberle, E.ON North America manager of government relations and external affairs, said in an email.

E.ON has deployed solar PV systems for TEP before, including its 6.6-MW Tech Park Solar and 13.2-MW Valencia Solar facility at the Fort Huachuca Army base near Sierra Vista, Ariz.

All told, E.ON has developed, built and operates solar and wind power facilities with a collective rated capacity of more than 3-GW across the U.S. It also provides third-party operations and maintenance (O&M) and asset management services for project developers and owners.

E.ON has deployed systems similar to Iron Horse in Germany, more specifically on the North Sea island of Pellworm, Eberle pointed out.

“Breaking ground on any project is exciting, but beginning construction on Iron Horse is especially exciting for us,” E.ON Solar President Steve Trenholm said in a statement. “Iron Horse is an important first step as E.ON establishes itself as a player in North American energy storage.

“Iron Horse is just the first of several energy storage projects we are working on, and we look forward to further building E.ON as a player in the battery storage market,” added E.ON VP of Energy Storage North America Mark Frigo.