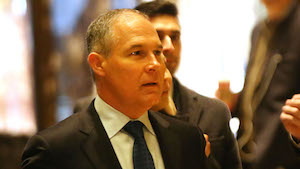 President-elect Donald Trump’s selection of a chief opponent of the Obama administration’s climate agenda and a staunch oil industry ally to lead the Environmental Protection Agency (EPA) prompted vows to battle the nomination.

Oklahoma Attorney General Scott Pruitt — who sued the EPA to overturn some of President Barack Obama’s signature initiatives — is Trump’s pick to lead the agency, according to people familiar with the decision.

It is a major victory for oil, gas and coal companies that have complained about a heavy hand at the agency. Pruitt relishes his role as its chief antagonist; an official bio on the 48-year-old Republican’s website proclaims him “a leading advocate against the EPA’s activist agenda.”

“I greatly appreciate the leadership Attorney General Pruitt has shown in suing to stop the EPA’s Clean Power Plan and look forward to watching him dismantle it piece by piece as EPA administrator,” said Se. Steve Daines, a Republican from Montana.

The EPA has played a pivotal rule in carrying out key parts of Obama’s agenda, especially fighting climate change. Pruitt has pushed back, battling a suite of the agency’s rules in court, including a regulation slashing greenhouse gas emissions from power plants, a water pollution measure and the agency’s conclusion that carbon dioxide is a pollutant endangering public health and welfare.

He also filed the first lawsuit challenging the implementation of Obama’s health-care law.

Several senators immediately said they would oppose his nomination, including Ed Markey, a Democrat from Massachusetts, who called Pruitt “unsuitable to lead the EPA” because of his history “carrying water for Big Oil.”

“The EPA is our cop on the beat, protecting the American people and our environment from harmful pollution, hazardous waste and the impacts of climate change,” Markey said in an e-mailed statement. “He has dedicated years of his career to rolling back the bedrock laws and rules that protect our water and our air.”

Although cabinet nominations can no longer be filibustered in the Senate — and candidates can be confirmed by a simple majority vote — Republicans will hold only a slim majority in the chamber next year. Pruitt’s nomination would be considered by the Senate Environment and Public Works Committee, set to be headed by Republican John Barrasso of Wyoming.

Environmental groups were already laying the groundwork for the confirmation hearings on Wednesday, urging their supporters to lobby the Senate to reject Pruitt.

“That’s a tough fight. We know that,” said Seth Gladstone, a spokesman for the Washington-based Food & Water Watch. “We will appeal to senators’ sense of moral obligation to protect the earth and human health.”

“We are totally mobilizing on this one,” Schatz told reporters in Washington, adding that he expects “it will be extremely difficult” for Pruitt to be confirmed.

If confirmed, Pruitt will be able to rework or rescind scores of environmental regulations officially — or simply ease off on their enforcement.

“This is about the worst thing he could be doing for the environment and the American people,” said billionaire hedge-fund manager and climate activist Tom Steyer in an interview at Bloomberg headquarters in New York. Trump “continues to appoint people who are seriously unfit and unprepared for the jobs they need to do.”

The fate of Obama’s carbon rules was already uncertain under the Trump administration. The U.S. Supreme Court already halted the Clean Power Plan that aims to slash greenhouse gas emissions from power plants, pending a decision by the D.C. Circuit on the rule’s legality. Trump frequently criticized the rule on the campaign trail, promising to rip it and other “job-killing” regulations up once in office.

Pruitt joined 26 other attorneys general in suing to block the Clean Power Plan. Pruitt has characterized that measure, the hallmark of Obama’s climate agenda, as an affront to states’ rights and violation of the Constitution.

“The Clean Power Plan is an unlawful attempt to expand federal bureaucrats’ authority over states’ energy economies in order to shutter coal-fired power plants and eventually other sources of fossil-fuel generated electricity,” Pruitt said in a statement last year.

In 2015, Pruitt also secured an injunction blocking EPA’s “Waters of the U.S.” rule, which expands the scope of the Clean Water Act. Oklahoma is one of 18 states challenging that regulation in court. He also signed on to a case trying to overturn the EPA’s endangerment finding, which provided the legal underpinning for later regulation of carbon dioxide. And he has been critical of U.S. biofuel mandates, describing current policy as “unworkable.”

It’s not unprecedented for an EPA administrator to have tangled with the same agency prior to leading it. For instance, Gina McCarthy, the current administrator, previously sued the EPA as a Massachusetts state official.

It’s not unprecedented for an EPA administrator to have tangled with the same agency prior to leading it. — Click to Tweet

“Scott has been there on every issue that we’ve had. He’s filed lawsuits that are necessary; he knows all the issues,” said Inhofe, who described Pruitt is a close friend. Inhofe, who will step down as chairman of the Senate Environment and Public Works Committee next Congress but remain a senior member of the panel, predicted that Pruitt will “perform well” during his confirmation process.

That view was shared by Republican Senator James Lankford of Oklahoma, who called Pruitt “smart on the law.”

“He’s obviously argued all the way to the Supreme Court on some of the overreach of the EPA,” Lankford said. “He’s very knowledgeable of what can and can’t be done by the EPA under the law.”

Mitch Bainwol, president of the Auto Alliance, which has tangled with Obama’s EPA over fuel-economy rules, called Pruitt “a terrific public servant, a great listener and a principled leader.”

Chad Warmington, president of the Oklahoma Oil and Gas Association, said,”We are not just excited about having an Oklahoman in a prominent role of a Trump administration, but we also look forward to a more measured regulatory approach at the EPA that will give a voice to all.”

Pruitt has served as Oklahoma’s attorney general since 2010. In that office, he created a state “federalism unit” tasked with fighting what his website calls “unwarranted regulation and overreach by the federal government.”

In May, he joined five other states in filing an amicus brief supporting TransCanada Corp.’s federal lawsuit alleging that Obama exceeded his authority in turning down a permit for the Keystone XL pipeline.

As attorney general, Pruitt has faced scrutiny over his close ties to the energy industry. In 2014, the New York Times reported that energy lobbyists had drafted letters for Pruitt to send to the EPA and other agencies challenging environmental rules that could affect the industry.

“Reasonable minds can disagree about the science behind global warming, and disagree they do,” Pruitt and Strange said in a statement released in March. “This scientific and political debate is healthy, and it should be encouraged.”

Before he was elected attorney general, Pruitt spent eight years in the state senate. In 2001, he made an unsuccessful bid to succeed Republican Steve Largent in the U.S. House of Representatives. In 2006, he sought the Republican nomination for Lieutenant Governor of Oklahoma but lost.