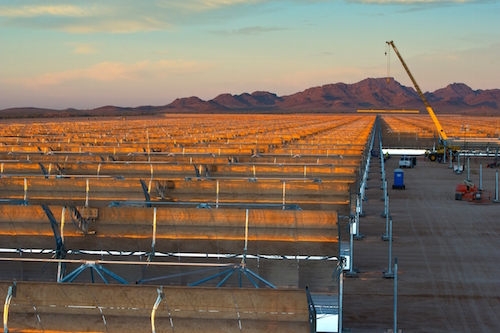 The solar industry is changing rapidly as it experiences unprecedented growth. Here are 6 facts that may surprise you about this increasingly popular source of power.

6. Solar energy is the most abundant energy resource on earth — 173,000 terawatts of solar energy strikes the Earth continuously. That’s more than 10,000 times the world’s total energy use.

5. The first silicon solar cell, the precursor of all solar-powered devices, was built by Bell Laboratories in 1954. On the first page of its April 26, 1954 issue, The New York Times proclaimed the milestone, “the beginning of a new era, leading eventually to the realization of one of mankind’s most cherished dreams — the harnessing of the almost limitless energy of the sun for the uses of civilization.”

3. Today, demand for solar in the United States is at an all-time high. The amount of solar power installed in the U.S. has increased more than 23 times over the past eight years — from 1.2 gigawatts (GW) in 2008 to an estimated 27.4 GW at the end of 2015. That’s enough energy to power the equivalent of 5.4 million average American homes, according to the Solar Energy Industries Association. The U.S. is currently the third-largest solar market in the world and is positioned to become the second.

2. As prices continue to fall, solar energy is increasingly becoming an economical energy choice for American homeowners and businesses. Still, the biggest hurdle to affordable solar energy remains the soft costs — like permitting, zoning and hooking a solar system up to the power gird. On average, local permitting and inspection processes add more than $2,500 to the total cost of a solar energy system and can take up to six months to complete. The SunShot Initiative’s soft costs program works to make it faster and cheaper for families and businesses to go solar.

1. California’s Mojave Desert is home to Ivanpah Solar Power Facility, the world’s largest operating solar thermal energy plant. It uses concentrating solar power (CSP) technology to focus 173,500 heliostats, each containing two mirrors, onto boilers located in three power towers. The plant, which came online in 2014, has a gross capacity of 392 megawatts (MW). CSP technology is unique in that it allows for solar energy to be stored for use after the sun sets — a key focus for our recent research and development efforts — which addresses some of the concerns over delivering solar power when and where it is needed most.

Explore DOE projects in solar energy on the Sunshot Initiative’s project map and study up on Solar Energy Basics.