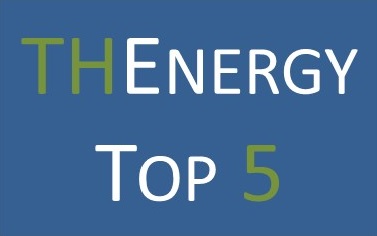 Top 1
French oil company Total to buy Saft in move on decentralized renewable energy markets
Total’s proposed offer will value Saft at €950 million. The Supervisory Board of Saft has already approved the friendly takeover. A spokesman of Total has pointed out to THEnergy that “the rationale for this proposed acquisition (…) is to further establish Total as a player in renewables (…), and to help us get a better understanding of the electricity value chain”. In addition, he said that Total had already “marked interest in decentralized energy systems” with minority stakes in the energy storage company STEM and in the off-grid solar players Offgrid Electric and Powerhive.

Top 2
Masdar finishes solar-diesel hybrid projects with 3.15 MWp PV in 5 Pacific states
The new microgrid projects were built under the USD50 million UAE-Pacific Partnership Fund (UAE-PPD). The latest projects include a 1MW PV plant in the Solomon Islands, a 500kW PV plant in Nauru, two solar-diesel hybrid plants totaling 450kW in Palau, a 600kW PV plant in the Marshall Islands and a 600kW PV plant in Micronesia. The projects will deliver a total of 3.15MW of clean energy capacity and displace over 4,000 tons of carbon dioxide emissions per year. They will also save 1.6 million litres of diesel fuel annually; supporting the Islands’ efforts to diversify its energy mix and meet each nation’s individual renewable energy targets.

Top 4
Solar-diesel hybrid with 1.9MWp PV and 1MW storage for Dutch Caribbean island St. Eustatius
SMA Sunbelt built the solar-diesel hybrid plant for Statia Utility Company (STUCO), which serves the island with electricity. Until March 2016, the island’s power supply was fully derived from diesel fuel. As a result of the green transition, the island’s local utility is now able to reduce its fossil fuel consumption by up to 30% and displace 2,200 tons of CO² per year.

Top 5
Enerdeal and Forrest Group sign off-grid solar microgrid with 1 MW PV and 3 MWh battery in Kongo
The plant will be located in Katanga in the Democratic Republic of Congo. It will be the largest off-grid solar plant in DRC and one of the biggest off-grid solar plants in Africa. The microgrid will give power to a region with no access to electricity. The production capacity is being coupled with several kilometers of medium and low voltage transmission lines, in order to power street lights and households and to enhance the development of new small and medium industries in the area.

For extended information about the Top 5 news with sources, please have as well a look at
http://www.th-energy.net/2016/06/03/top-5-hybrid-energy-news-solar-and-wind-diesel-hybrid-microgrids-may-2016-by-thenergy/