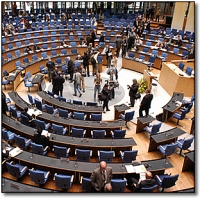 Clean energy technologies are a solution to the complex of fossil fuel problems, and they are also a $1.9 trillion opportunity by 2020. But only if public policy makers provide the right framework for private financial decisions.

Bonn, Germany – June 3, 2004 [SolarAccess.com] This was the conclusion of a report released by the U.N. Environmental Program Finance Initiative at the German government’s international forum, Renewables 2004. That needed framework was summed up by Virginia Sonntag-O’Brien of BASE, a company facilitating RE investment, as “loud, long, and legal.” The report suggested that a “loud” policy framework would adopt tough targets and schedules for achieving goals such as CO2 reductions, and stick to them for as “long” as it takes. And it must be law — “legal.” A communique issued by the two-day financing side event, also noted that fossil fuel subsidies are a problem in many markets, making conventional energy prices artificially low. “The most important thing that policymakers can do is create confidence in the long-term future of the renewables market by policies that make ‘the deal on the table’ attractive financially,” the report said (the report may be downloaded below). The author of the report, Dr. Andrew Dlugolecki of the University of East Anglia, based his conclusions on interviews with financial decision makers in the private and public sectors, mostly in Europe, although Citibank was one of the sponsors. An advisor on climate change to top companies, Dlugolecki said he was rocked by one manager of a one billion UK pound investment fund who told him climate change was a fraud dreamed up by researchers looking for money. Steve Westwell, CEO of BP Solar, told a plenary session of the conference that his company was closing the cost gap with 30 years of cost reductions, averaging in the past 5 to 10 years, 30%. The company, he said, was on the path to make PV competitive with grid peak power in 15 to 20 years. Emil Salim, former Indonesian Minister of the Environment, appealed for support for the controversial recommendations in the study he led reviewing the World Bank’s extractive industries financing policies. (Full report at eireview.org.) The bank’s board of executive directors will consider the report June 21. His proposal that the Bank, recognizing the failure of such projects to alleviate poverty, let alone address environmental concerns, phase out all coal and oil project investment in about five years. The report said the current 94% of the energy portfolio should be flipped to renewables at a rate of 20% a year. While these recommendations have made him the man of the hour at this conference, they have been strongly opposed by some of the world’s biggest private banks which co-fund such projects. The countries which would host the projects, such as massive oil pipelines in Chad and Cameroon and from the Caspian to Turkey – have also rejected the recommendation. Salim told one audience here that if China’s realized its goal of an automobile for every Chinese family by 2020, Indonesia would lose 20% of its land mass as the sea rises. For its part, the People’s Republic of China outlined an ambitious program to bring off-grid power (wind, PV, and small hydro) to 23 million of its rural citizens in 12 western provinces by 2010. OPEC representation is scant here, but Saudi Arabia stressed the need for a balance between different energy sources, and with Iran, called for clean fossil fuel technologies. German Chancelor Gerhard Schroder is due to address the conference June 3. Tony Blair, UK prime minister, will appear on video, and the conference will hear from David Garman, acting Under Secretary of the U.S. Department of Energy. Mark Braly is attending the four-day conference in Bonn, Germany as a correspondent for SolarAccess.com News