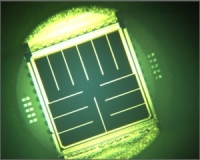 WASHINGTON, D.C. — How small can a solar cell be and still be a powerhouse? How about six hundred microns wide — about the diameter of a dot made by a ballpoint pen? The U.S. Department of Energy’s National Renewable Energy Laboratory recently validated greater than 41 percent efficiency at a concentration of 1,000 suns for tiny cells made by Semprius — one of the highest efficiencies recorded at this concentration. The energy conversion efficiency of a solar cell is the percentage of sunlight converted by the cell into electricity.

Seed money from DOE, together with the experts at the NREL-based SunShot Incubator Program, lifted Semprius from a small electronics start-up with a novel idea to a real difference-maker in the solar cell world. 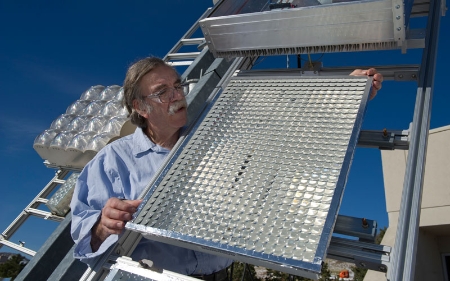 Semprius’ triple-junction cells are made of gallium arsenide. Low-cost lenses concentrate the sun light onto the tiny cells 1,100 times. Their tiny size means they occupy only one-one thousandth of the entire solar module area, reducing the module cost. In addition, the use of a large number of small cells helps to distribute unwanted heat over the cell’s structure, so there’s no need for expensive thermal management hardware such as heat fins.

Semprius engineers use the company’s patented micro-transfer printing process to allow the micro-cells to be transferred from the growth substrate to a wafer. In a massive parallel process, thousands of cells are transferred simultaneously. This allows the original substrate to be used again and again, dramatically cutting costs. It also provides a way to handle very small cells.

This low-cost approach, which Semprius executives say can cut manufacturing expense by 50 percent, caught the eye of energy giant Siemens, which this year took a 16 percent stake in Semprius, as part of a $20 million investment from venture capitalists.

Since 2007, DOE has invested $50 million for 35 solar start-ups to participate in the PV Incubator program — now the SunShot Incubator — at NREL. Private investment in those firms now totals more than $1.3 billion, a 25-to-1 multiple.

DOE and NREL selected Semprius to be one of their PV Incubator companies in 2010. Incubator companies get $1 million to $3 million to develop their concepts into actual working prototypes or pilot projects. And they also get the expertise of NREL scientists to help overcome obstacles and test for reliability and validity.

Semprius’ back story, though, begins at the University of Illinois where Professor John Rogers and his team developed the transfer-printing process initially intended for flexible electronics.

Soon, Rogers realized that applying the technology to a concentrated photovoltaic (CPV) design could be much more lucrative.

“We’re using a completely different approach to what has been practiced,” said Kanchan Ghosal, CPV Applications Engineering Manager and the principal investigator for Semprius’ PV Incubator Award. “This approach uses micro-cells and transfer printing to significantly reduce the use of materials in highly concentrated PV modules. And it provides a highly parallel method to manufacture the module, based on established microelectronics processes and equipment.”

Demand for Concentrated PV Expected to Double Each Year

Semprius broke ground on a manufacturing plant in Henderson, N.C., this year. The state of North Carolina and local agencies kicked in $7.9 million for the 50,000-square foot plant, which is expected to employ 256 people at full build-out.

North Carolina Gov. Bev Perdue cited her state’s “investments in education and job training” as the reason the company chose to locate there. The plant is expected to start operating next year, with an initial capacity of 5 megawatts, eventually growing to 35 megawatts.

The available market for highly-concentrated photovoltaics is expected to double or more each year over the next nine years, reaching greater than 10 gigawatts of power by 2020, according to Semprius CEO Joe Carr.

Semprius first looked at using its micro-transfer printing for solar cells in 2007, with the help of a “Next-Gen” grant from DOE’s Office of Energy Efficiency and Renewable Energy.

In 2010, Semprius earned one of four spots in what is now the SunShot Incubator, which is funded by DOE and run out of NREL. 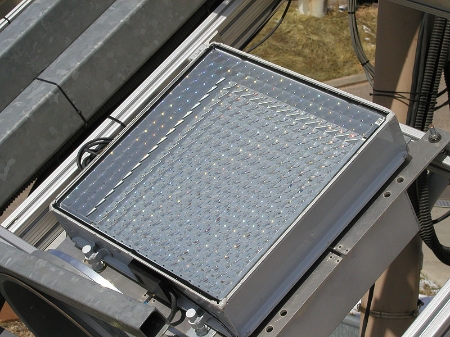 Ghosal laughs when he remembers the frantic moments finishing the application for the PV Incubator.

“We barely met the criteria,” Ghosal said. “The rules said that you had to have a module ready to be eligible, but we only had small squares with a couple of cells, not a real module.”

So, the Semprius engineers “worked feverishly day and night to make our first module.”

“Two days before the deadline, we were able to get good results from that first module,” Ghosal said. “We applied for the Incubator grant with the results from this module and a scale-up plan.”

When Ghosal asked the company’s engineers about whether they could meet the hard deadlines and aggressive goals laid down by NREL, “I was met with a lot of apprehension,” he recalled. “NREL was asking for a lot of deliverables that had not been done before.”

But it all worked out, and Semprius became the latest Incubator company to achieve more than it thought it could via the strict dictates of the NREL contract.

“It looked like a tall order, but we met all our goals,” Ghosal said.

Kaitlyn VanSant, NREL’s technical monitor for Semprius, said the company is being too modest.

“They actually met the goals a lot faster than originally anticipated,” VanSant said. “The goals were definitely aggressive, but they accomplished them quicker than the timeline.”

The modules to be made in the North Carolina plant starting next year will be 24 inches by 18 inches, and about 2 and a half inches deep, have a concentration of more than 1,100 suns and an efficiency of more than 31 percent. These modules would be cost competitive with fossil fuel technology at high volume.

“A lot of the early benefits were from the testing NREL could do. NREL has an internationally recognized testing program,” Ghosal said. “It’s one thing to claim a particular output, but something different to say that it was validated at NREL. It gives that stamp of credibility.

“Also, we learned from NREL how vigorous we had to be in terms of the materials we are using,” Ghosal said. “We got an understanding of how it would perform in the field and got some important pointers of what to watch for.”

Bill Scanlon is a writer for the National Renewable Energy Laboratory (NREL). This article was originally published as an NREL news feature and was reprinted with permission.