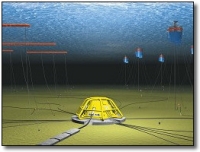 Ideas for wave and ocean energy devices abound, but have largely floundered within the Research and Development phase. Commercialization of these alternative energy systems will be one step closer to reality when a UK development agency completes their plans to put what amounts to a large electrical socket in the ocean floor off the coast of South West England, enabling ocean energy entrepreneurs to more easily test a variety of technologies and approaches.

Exeter, United Kingdom – February 11, 2004 [SolarAccess.com] The United Kingdom’s South West Regional Development Agency (RDA) has committed almost half a million pounds to take forward plans to install an electrical socket, known as the Wave Hub, off Cornwall’s Atlantic coast, connecting wave power machines to the national grid. The money will be used to complete an initial study looking into the viability of the Wave Hub; where it would be best located; and the economic benefits of the project to the South West. If the findings of this study are positive, a second phase of research will carry out detailed site surveys of the proposed location. The Wave Hub will consist of an underwater cable connected to the national grid and extending approximately nine miles out to sea. The cable will enable wave power companies to test how well groups of wave machines produce power before they move on to producing them on a commercial basis. It will also encourage these companies to construct their machines in the South West and to use the specialist skills of the region’s many strong marine and electro-hydraulic businesses. “We already know that the wave and tidal energy industry is very supportive of Wave Hub and if the results of this study are good, Wave Hub could be in the water by 2006” explained Dominic Vincent, RDA environment manager. “This would put the South West on the map for wave and tidal energy. The Sea Power Review has produced some extremely encouraging results and the feasibility study will build on this by looking at the economic benefits for the region.” The results of a study into the South West’s sea power resources, commissioned by the RDA to inform the development of Wave Hub, have been published (Monday 9 February). This study will also be a valuable resource for companies looking to locate wave and tidal machines off the South West coast. The findings conclude that the region has some of the best resources in the UK for generating wave and tidal energy. The South West also experiences less severe storms than other areas of the UK, such as the western shores of Ireland or Scotland, making the region a good location for wave and tidal turbines. “The decision by the RDA to explore the wave hub concept in detail will generate real excitement amongst wave companies throughout Europe,” said Matthew Spencer, chief executive of Regen SW. “The study published today shows that the development of wave and tidal energy technology can deliver significant jobs to the South West over the next fifteen years. The RDA’s work in this field is a canny investment for the future economy of the region.” Proposals for the wave hub were initially suggested in a report prepared for the RDA by Regen SW in October 2003 after the RDA asked Regen SW to review ways to kick start the region’s sea power industry.