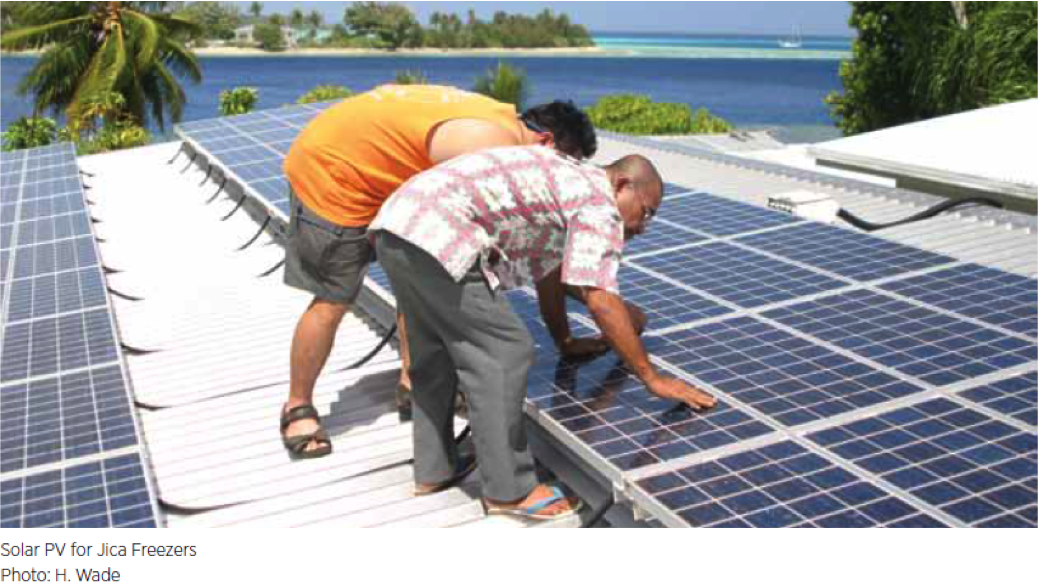 Powering and fueling societies by harvesting solar, wind and other clean, renewable energy resources makes good sense anywhere, anytime – especially now that technical performance has improved and costs have dropped so dramatically. Nowhere is this more true than it is for small island nations where energy costs are high and human populations, not to mention ecosystems and natural resources, fragile and threatened.

Though very different in terms of geography and geology, the three small island nations are blessed with an abundance of renewable energy resources but have only recently launched efforts to harness them for power.

Fiji, the Marshall Islands and Vanuatu

An archipelago of volcanic islands that stretches across 1,750 km (1.075 mi.) of South Pacific Ocean, Vanuatu has an abundance of renewable resources including solar, geothermal, wind, biomass and biofuels, IRENA’s RRA highlighted.

Despite all the benefits renewable energy offers, heavy reliance on fossil fuels for electricity remains the rule on Vanuatu and among small island nations the world over, however, imposing high costs on residents – not only financially, but also in terms of environmental pollution, ecosystems and natural resource degradation, IRENA Director-General Adnan Z. Amin pointed out.

“The development of local renewable resources in these island nations would decrease their dependency on fuel imports and reduce risks associated with oil-price volatility. The falling costs of renewable energy offers them an opportunity to rethink their energy strategies, develop policies and build institutions that would create jobs, bring power to those currently without and deliver more reliable electricity services, all while combatting climate change.”

Government leaders and residents across all three South Pacific island nations are starting to take note. Vanuatu’s government, for instance, is in the midst of following through on a National Energy Roadmap that calls for renewable energy to supply 63 percent of the island nation’s electricity needs by 2030. Today, renewables provide 43 percent of Vanuatu’s electricity.

The RRA for Vanuatu identifies ways residents can accelerate attainment of the island nation’s renewable energy goals. Development of off-grid renewables, for example, can deliver modern energy services to the 83 percent of rural residents that don’t have ready, reliable access to electricity, the report authors contend.

In contrast to Vanuatu, the Marshall Islands is a collection of more than 1,225 South Pacific coral atolls and reef systems. When it comes to renewable energy resources, the Marshallese are as fortunate as the residents of Vanuatu, however.

Rich in solar and wind energy potential, residents were subject to a sharp spike in electricity and fuel costs back in 2008. The much higher cost and volatility of imported fossil fuels led the government to enact a National Energy Policy and Energy Action Plan, both of which revolve around boosting renewable energy deployment.

As rich as any nation in cultural, geographic and ecosystems diversity, Fijians also rely heavily on fossil fuels to generate electricity and just like in Vanuatu and the Marshall Islands, Fijians are now turning to distributed local renewable energy. Fiji’s leaders believe a mix of small-scale hydropower, biomass, solar, geothermal and wind energy can meet 100 percent of the island nation’s energy needs.

SEIA (Solar Energy Industries Association) President Rhone Resch agreed that renewable energy yields broad-based socioeconomic benefits for small island nations: “In study after study, solar is shown to save consumers money and provide important benefits to the environment and society as a whole.

“Here in the United States, the tremendous growth of solar energy has translated into the reduction of more than 23 million metric tons of harmful carbon emissions a year and the creation of tens of thousands of new jobs. In 2004, there were less than 20,000 people at work in the U.S. solar industry. Through 2014, that number had soared to 174,000 – with new jobs being added every day.”

“Renewable energy is no longer just the best choice socially and environmentally, it is also the best choice economically for many countries in many parts of the world,” IRENA’s Amin stated. “It has never been cheaper for small island states to reduce electricity costs, increase energy independence and improve energy access through the deployment of renewable energy.”