A new report from the prominent global consulting firm McKinsey shows why solar photovoltaics have hit a tipping point.

As the economics of solar PV continue to improve steadily and dramatically, McKinsey analysts conclude that the total “economic potential” of solar PV deployment could reach 600-1,000 gigawatts (1 million megawatts) by 2020.

That doesn’t mean 1 million megawatts will get by 2020; it’s just an estimate of the economic competitiveness of solar PV. When factoring in real-word limitations like the regulatory environment, availability of financing, and infrastructure capabilities, the actual yearly market will be closer to 100 gigawatts in 2020.

The McKinsey report, appropriately named “Darkest Before Dawn,” highlights three crucial factors that are giving the solar industry so much momentum — even with such a violent shakeout occurring in the manufacturing sector today.

1. Because solar mostly competes with retail rates, the economic potential for the technology in high resource areas is far bigger than actual deployment figures would suggest. McKinsey predicts that the cost of installing a commercial-scale solar PV system will fall another 40 percent by 2015, growing the “unsubsidized economic potential” (i.e. the economic competitiveness without federal subsidies) of the technology to hundreds of gigawatts by 2020. 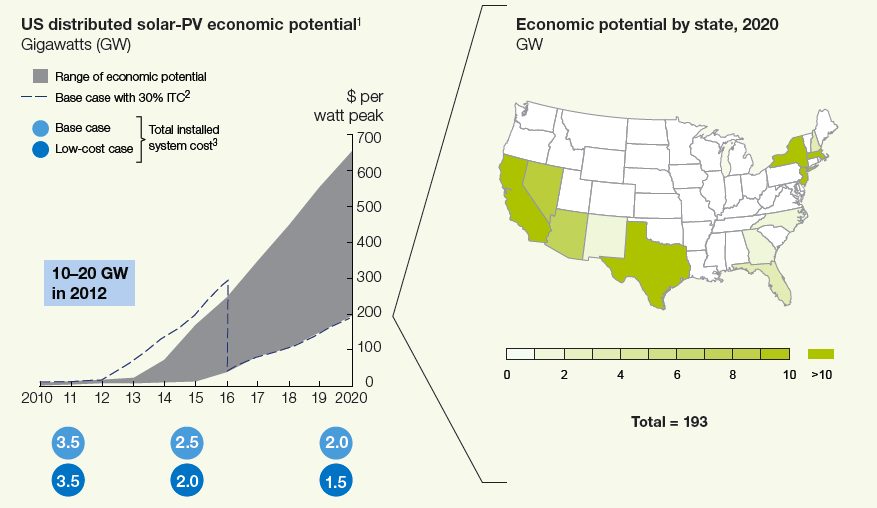 2. The most important cost reductions in the next decade will come not through groundbreaking lab-scale improvements, but through incremental cost reductions due to deployment. The McKinsey analysis shows how the dramatically these cumulative cost improvements can change the economics of solar. (For more, see: Anatomy of a Solar PV System: How to Continue “Ferocious Cost Reductions” for Solar Electricity.) 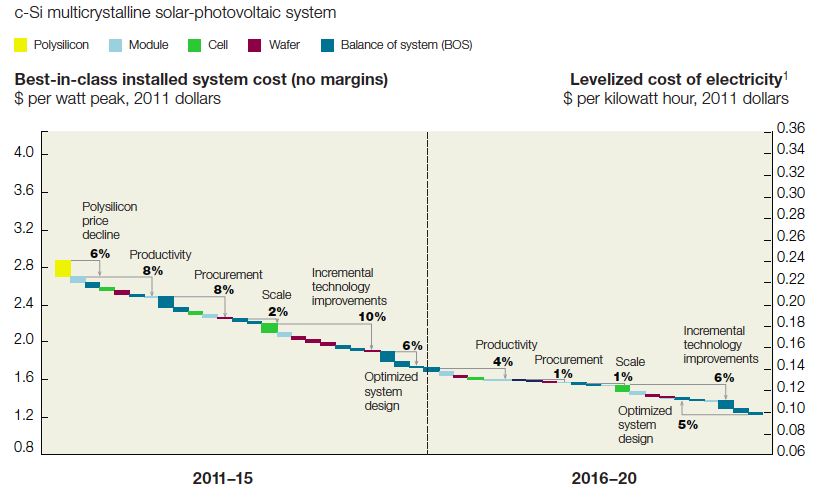 3. Solar is already competitive in a variety of markets today. As the chart below illustrates, there are at least three markets where solar PV competes widely today: Off-grid, isolated grids, and the commercial/residential sectors in high-resource areas. Of course, the competitiveness of the technology varies dramatically depending on a variety of local factors. But this comparison shows just how steadily the cross-over is approaching.

Wait, solar is actually competitive? Didn’t the death of Solyndra mean the death of the solar industry? Addressing the solar skeptics, the McKinsey analysts counter the notion that the solar sector is down for the count:

Those who believe the solar industry has run its course may be surprised. Solar companies that reduce their costs, develop value propositions to target the needs of particular segments, and strategically navigate the evolving regulatory landscape can position themselves to reap significant rewards in the coming years.

The short-term picture for solar is extraordinarily challenging, particularly for manufacturers trying to figure out how to make a profit with such a massive oversupply of panels on the market. But this is not an industry in its death throes; these are natural pains for a disruptive, fast-growing industry. The tipping point is upon us.