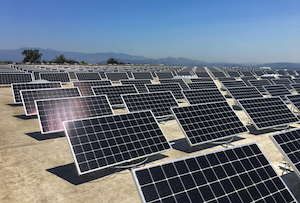 Solar entrepreneur Bill Gross, the CEO of Edisun Microgrids, has successfully penetrated the commercial and industrial solar market segment with dual-axis trackers, promising a 30 percent performance boost for a cost increase of only 10 percent compared with a standard fixed-tilt PV installation, at optimal U.S. locations, he says.

The design of the low profile, high strength tracker hugs the rooftop and is sheltered by parapet walls, rendering wind a non-issue. The single solar panel tracker table moves around a circular metal track to follow the sun, while an actuator arm adjusts for optimal inclination. The product features flexible layout design options, minimal weight per square foot, fast installation, and simple operations and maintenance, while also meeting strict safety standards, the company says. Either 60 or 72-cell panels can be used. The units can accommodate a roof slope of up to 10 percent.

“The C&I solar market has an almost infinite growth potential,” says Gross. “California alone presents an opportunity of 7 billion square feet of uncovered commercial rooftop space, with just half of that representing a 55-GW potential; it’s a crazy opportunity,” he says. “With our early evening generation capability, we play to the California duck curve, whereas fixed PV only exacerbates the curve; we’re putting out an anti-duck curve,” he says.

He added that the company has seen some interest from states with colder climates, such as New York and Rhode Island, where they hope to get a big economic boost aiming at steep winter sun angles.

“If there is a time-of-use rate issue at play, we can also help with another 5 percent gain over our baseline performance,” he said. “On buildings with more than 100,000 square feet of roof space, there is no extra tax on the transmission grid, with all its losses and costs. And the trackers also can lessen the air conditioning load because they absorb heat energy on the roof.”

Edisun is pursuing third-party warranty coverage, but currently offers extra trackers as an extra performance assurance for the client. In the case of HRI, Edisun provided 50 extra trackers.

“Our endurance testing indicates that these units can last 35 to 40 years,” Gross says. In the event that the tracker movement mechanisms fail, the panel can be pinned to the vertical assembly to continue functioning as a fixed installation.