Battery technology has come a long way since the days when your granddad had to periodically peek under the hood to add water to his lead-acid battery.

Even a decade ago, the idea that battery banks would soon be “smoothing energy flow” between the electricity produced by wind and solar farms and the utility grid was almost inconceivable.  But batteries are now being harnessed to regulate and store the inherently variable energy output from wind and solar projects worldwide.

In addition, batteries are increasingly being used for off-grid applications including everything from stabilizing unreliable grids in developing nations to offering independent-minded Europeans and North Americans an alternative to total reliance on utilities.

By some estimates, energy storage could help stem billions of dollars worth of wasted energy annually; with the global smart-grid market expected to top $400 billion by 2020.

“Renewables are reaching a point where there’s substantial penetration on the grid,” said Haresh Kamath, EPRI Program Manager for Energy Storage and Distributed Generation in Palo Alto, California.  “California wants 1.3 GW of energy storage on the grid by 2020.”

Batteries are the key to it all.  Battery capacity can help meet the needs of a renewable-energy powered grid at any given point. 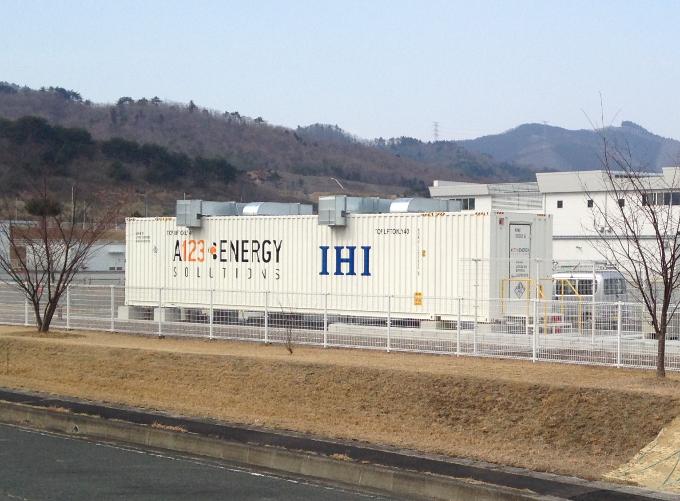 A 1-MW/2.8-MWh Grid Storage Solution installation in Japan.  The project was commissioned in March 2014 and is being used for peak shaving and demand charge management. Credit: A123 Energy Solutions.

In their simplest form, batteries convert electricity into chemical energy and store it.  In an ordinary car battery, lead-based plates are submerged in an electrolytic mixture of water and sulfuric acid.  This reactive mixture releases electrons that, in turn, flow through electrical conductors to produce energy.

“We think energy storage will make intermittent renewables more valuable,” said Paul Siblerud, Executive Vice-President of Marketing and Strategic Sales at ViZn Energy in Columbia Falls, Montana.  “We drive by wind farms all the time and it seems like half the turbines have their blades tethered back and aren’t even turning.  If we could store that energy and dispatch it at high peak times, you could use that power when needed.”

Depending on the system design and location, amortization on such a large storage facility might take 5 to 7 years, said Kamath. 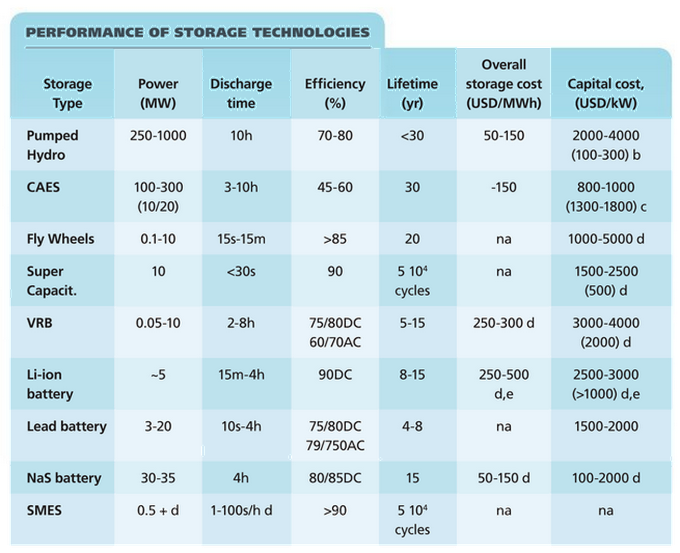 Solar power is also subject to the vagaries of the weather. “Solar has a tendency to drop out,” said Siblerud.  “Cloud formation over your panels can cause a 30 percent drop in power.”

One key to making energy storage using batteries actually work are bi-directional inverters that convert electricity from DC power in a battery bank to AC in the household; or AC to DC when charging.  Industrial scale inverters not only control battery charging for grid-scale solar and wind operations, but they also manage switching and voltage when making the transition from a wind or solar operation to the grid.

That is known as, “smoothing the grid” or taking the renewable energy that is generated and regulating it, so it can be put on the grid.

“Unfortunately the trade-off has always been that generally fossil-fuel gas peaking plants are doing the [smoothing] work,” said John Wood, CEO of Ecoult Energy in Sydney, Australia.  “Yet batteries do it better, as there is essentially zero lag between signal and response.  It can give full power in an instant and soak up full power in the next instant.”

Wood said that PNM of New Mexico has integrated Ecoult’s Ultrabattery into a four-acre solar farm comprised of 2,158 photovoltaic panels.

“To date, Ecoult’s most significant renewable energy smoothing project has been the PNM solar project in New Mexico,” Wood said.  “The 500-kW solar plant can experience rapid ramp rates of over 130 kW per second, so it is useful to the grid operator that there is some buffer between that and the grid.  Ultrabattery technology can charge and discharge quickly and continuously for long periods.”

Meanwhile, Japan’s NEC Corporation has acquired the A123 energy solutions business unit of A123 systems, LLC.  The result will be a new company known as “NEC Energy Solutions” due to begin operation in June. NEC believes the new company will become a world leader in supplying large-scale utility grids with lithium-ion storage systems using A123 Systems’ Nanophosphate Lithium-ion cells.  Recent NEC-involved energy storage projects include a 500-kW and a 2-MW installation in mainland China.

The project will use lithium-ion batteries for long-term demand of several hours, and lead-acid batteries when the average discharge time is one hour or less.

Here in the U.S., ViZn Energy is launching a zinc redox battery that the company said has a 20-year plus lifespan and the ability to scale up to hundreds of megawatts for utility-scale applications.  ViZn is taking pre-orders for the battery now and expects to ramp up manufacturing this spring. 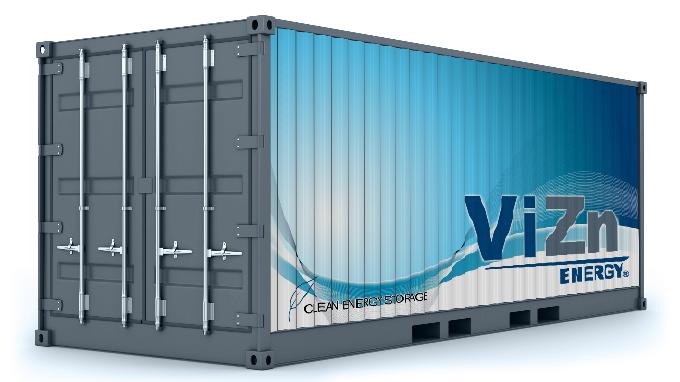 “We’ve sold a couple of units in Europe and the U.S. and our inquiries have been split between European and North American wind and solar and African off grid [interests],” said Siblerud.  “But I don’t know what’s really going to be sold when the industry matures.”

ViZn may have North American competition.  NEC noted that in conjunction with EPRI, its new energy unit will jointly conduct Knoxville, Tennessee-based field trials of an electricity storage system using NEC’s lithium-ion battery.  The goal is what it terms “a step towards getting U.S. compliance” on the company’s future smart-grid battery storage applications.

In order to meet sudden drops in wind or solar generation, such grid storage batteries are designed to discharge large amounts of power in literally milliseconds.

Although ordinary car batteries are considered flooded lead-acid batteries; for grid storage, industrial-quality flooded batteries are built to be “deep cycle.”  That is, they can be repeatedly charged and discharged over thousands of cycles – down to Amp Hour (AH) levels of 50 percent or less.

“Flooded batteries require the addition of distilled water from time to time as the battery is charged and discharged,” said Dean Middleton, Director of Renewable Energy Sales at Trojan Battery in Santa Fe Springs, California.  “However, if the site can be maintained, flooded is usually our first choice.” 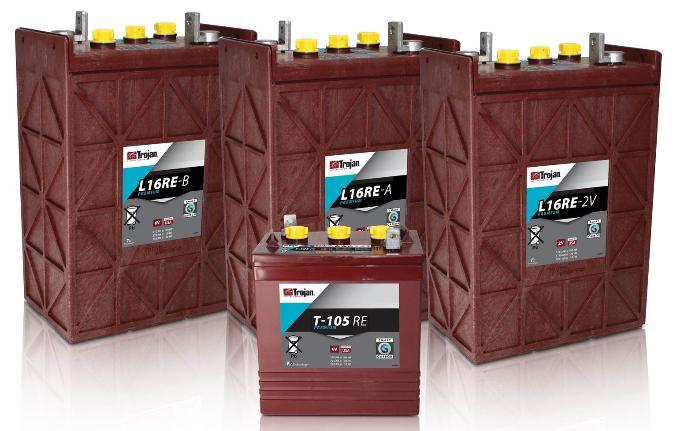 When charged, flooded batteries produce oxygen and hydrogen however so they can’t be shipped via air and when stored still need adequate ventilation.

VRLA (Valve-Regulated Lead Acid) batteries were developed in the late 1960s, in part to avoid having to add water.  Even though VRLA batteries have pressure vents that allow for surplus off-gassing, that still doesn’t alleviate the need for adequate ventilation.

Although they are usually more expensive than conventional flooded batteries, they remain a viable choice for remote locations that might not have access to system maintenance.

Wood says Ecoult is also focused on maximizing potential from so-called “microgrids.”  He said, for Ecoult, microgrids can include everything from single telecom towers to remote mining sites. Although these sites often have existing wind, solar or diesel generators, Wood said they present a perfect opportunity for Ultrabattery to make an impact, as diesel costs are usually high and onsite generator efficiency can be “sub-optimal.”

Some five years ago, Nova Scotia-based Surrette Battery set up several small systems for a few dozen residents on the Scottish Isle of Muck and its neighboring islands of Rum, Eigg and Canna — all using a combination of wind, solar and hydro with diesel backup. 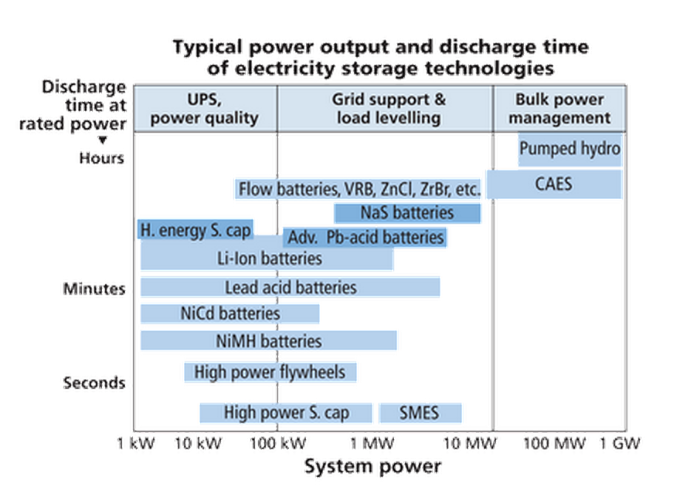 “Countries such as the Dominican Republic, Pakistan and Afghanistan, have issues with power outages and quality,” said Middleton.  “We supply residential backup when the grid is down.”

In Ecuador’s Gulf of Guyaquil, Trojan worked recently with Ecuadorean-based AV Renewable Energy S.A. to outfit some 40 homes on the Isle of Bella Vista with energy storage systems.  The installations involved 150 to 300-kW pole-mounted photovoltaic systems as part of a government-backed rural electrification initiative.

However, North America remains a vast largely-untapped new market for such off grid residential applications.

“In the U.S., we’re selling lots of residential applications for people looking to get off the grid to avoid high electricity costs,” said Jeff Myles, marketing manager at Surrette Battery company.  “They set up battery banks to store that power.  Any excess they don’t use is fed back into the grid.”

Myles said the most common residential battery set-up involves a 48-Volt system with eight 6-Volt batteries tied together.  According to Myles, if a homeowner typically needed 1000 kW of power, then they would buy a battery bank that had a minimum 2000 Amp Hour (AH) capacity.  The idea, he said, is to never allow the batteries to discharge below 50 percent.  Myles noted that a common residential installation would use standardized battery sizes of some 116 to 130 lbs each; that, in turn, could be set up in a well-ventilated utility room.

Myles noted that in such setups, the batteries alone can run between $5,000 to $10,000.  However, he said these type of residential applications can pay for themselves within 5 to 7 years. 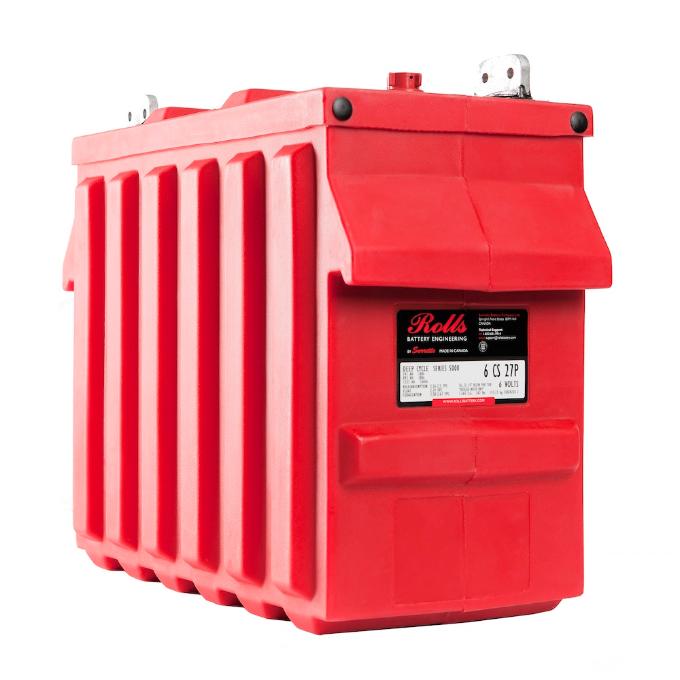 “There are also some cases,” said Myles, “where rather than using a fossil fuel-burning generator, people buy a bank of batteries for back-up in [the event of] power outages.”

It’s too early to predict whether energy storage will actually make a large-scale transition from its current more novel status to being de rigueur in any grid that incorporates wind or solar energy.  But energy storage via battery technology will likely continue to make inroads into the off-grid market for cost-conscious, independent-minded European and North Americans.

In the short term, however, the most dynamic growth is likely to be in the developing world, where leapfrogging conventional utility grid infrastructure arguably remains the best option.

“In countries like Nicaragua, where 60 percent of the population has no access to grid power and never will, I think solar is always going to be dominant,” said Trojan’s Middleton.  “Throughout the developing world, in everything from schools to small businesses to residences, well over 95 percent [of electricity] is from off grid solar.”