More
Home Baseload The State of Renewables Is Strong and Congress Needs to Keep It...

In his State of the Union speech, President Obama reaffirmed our country’s moral obligation to protect our kids from the dangers of climate change. And in doing that, he gave a shout-out to one of America’s fastest-growing industries, a critical tool in this fight—solar power: “Every four minutes,” he observed, “another American home or business goes solar — every panel pounded into place by a worker whose job can’t be outsourced.”

The president is right: America is making impressive gains on renewables such as wind and solar power, and energy efficiency, at least for now. Thanks to important federal, state and local policies and laws that promote clean, renewable energy, overall, the state of renewable energy in America is strong.

But while the Obama administration has championed important policies and legislation, the renewables industry has weathered too many boom and bust cycles caused by fickle federal support. Policies and legislation that support renewables are an investment in making America stronger and we need to protect and reinstate them now, especially the recently expired Production Tax Credit for wind power, and the Investment Tax Credit for the promising field of offshore wind. 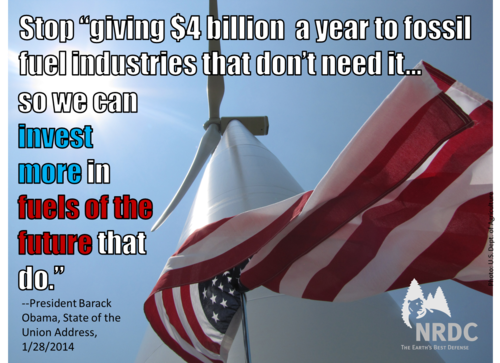 Actually, how fast renewable energy in the U.S. has grown is kind of mind-boggling. Just 15 years ago, in 1998, for example, all the grid-tied solar installed in the U.S. amounted to 34 homes-worth. By contrast, in 2012 alone, the nation installed enough solar photovoltaics to power more than 540,000 homes. All in all, the United States now gets enough electricity from the sun to power more than 1.7 million homes.

Wind power has similarly staggering gains. Onshore wind now accounts for more than 5 percent of the county’s total installed electric capacity. Iowa, South Dakota and Kansas get more than 20 percent of their electricity from wind, and another six states get at least 12 percent. During our recent cold snaps, wind power with its constant low price has also helped reduce the damage to consumers’ bank accounts, as the price on natural gas surged.

The number of jobs these pollution-free technologies are producing is growing, too. The solar industry now employs more than 142,000 Americans, up 19.9 percent or 10 times faster than the national average. These jobs are good jobs, with the average solar installer earning between $20 and $23.63 an hour—a rate comparable to skilled electricians and plumbers.

Similarly, despite extreme volatility in the wind power industry due to the recent expiration of the federal Production Tax Credit, the wind industry employs 80,000. In 2006-2007, only 25 percent of U.S. wind power components were manufactured here. In 2012, the number was more than 70 percent.

One more mind-boggling thing about the state of renewable energy: Prices are plummeting. The price of installed solar power, for instance, dropped a staggering 60 percent between the first quarter of 2011 and the second quarter of 2013, according to a recent report. With wind, the price dropped by 43 percent between 2009 and 2012.

How do we keep this amazing news coming? To begin with, Congress should immediately reinstate the Production Tax Credit and the Investment Tax Credit; both credits expired on December 31.

We also need to build on state renewable energy standards. Right now, 30 states, Puerto Rico and the District of Columbia have enforceable standards that require utilities to get certain percentages of their electricity from renewable sources. In recent years, several of these states have upped or fast-tracked their goals. Let’s keep that momentum going, and reject efforts by fossil fuel funded interests to go backward.

As the president said last night, “We know that the nation that goes all-in on innovation today will own the global economy.” We need more funding for basic research through programs like ARPA-Energy, which supports projects that have the potential to transform the ways we generate and use energy.

Last night, the president said we need to “stop giving $4 billion a year to fossil fuel industries that don’t need it, so that we can invest more in the fuels of the future that do.” The state of renewables and energy efficiency is strong and making us stronger. Congress should heed the president’s call.

This article was originally published on NRDC Switchboard and was republished with permission.